On the morning of the wedding, Ewfame dresses her daughter in green silk and ties a flower in her hair. 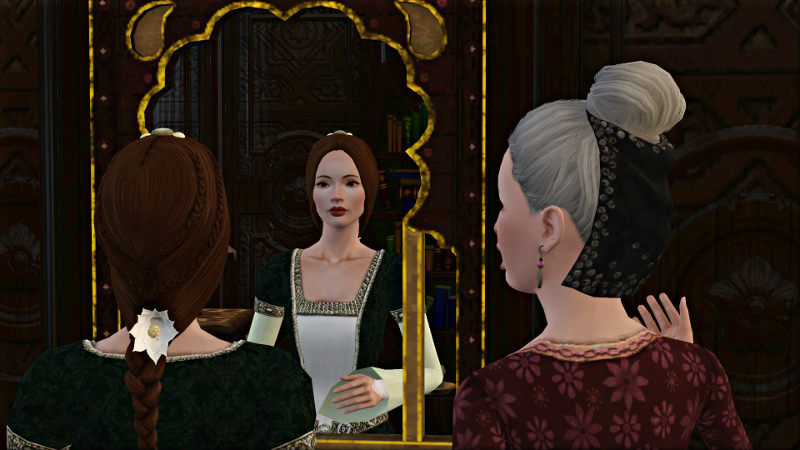 They stop at the village church to hear the morning sermon before riding on to Plumbob Hall. 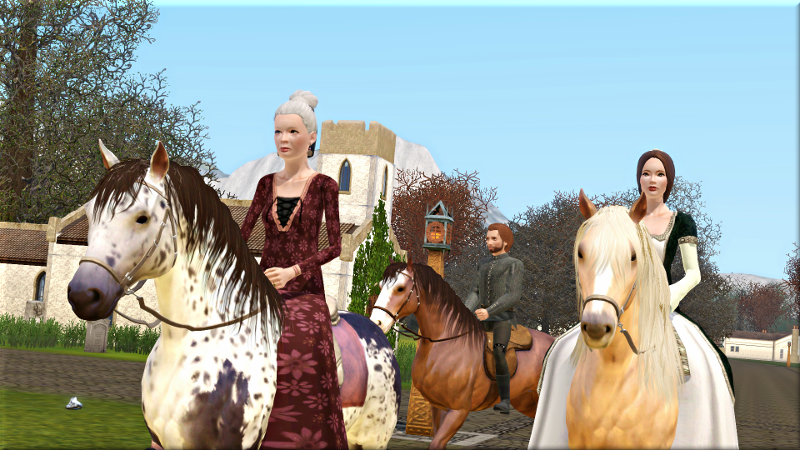 It is the Feast of the Candles, a lucky day for new beginnings, perfect for a wedding.  Ewfame reflects that it will be a kind of new start for her too, when she is alone again at Havlock Hall. She can barely remember what she used to do with herself, without Hilith to walk and read and talk with.

The women reach the great house and present themselves before Lord Snordwich. 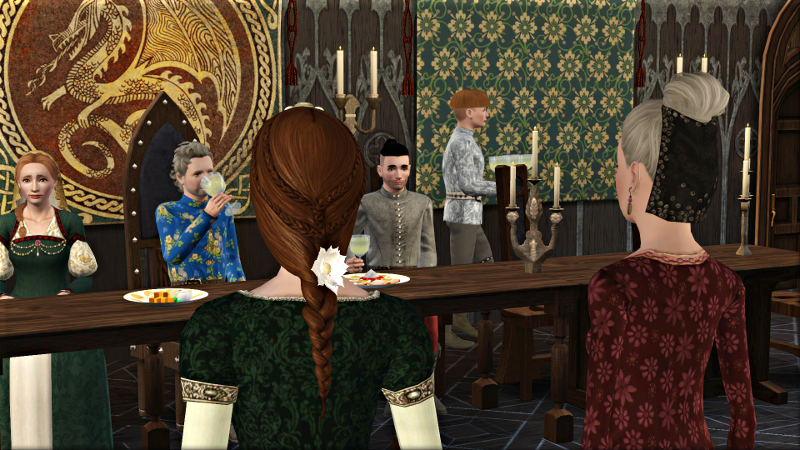 After the baron has welcomed them, Hilith’s father steps forward to congratulate her. 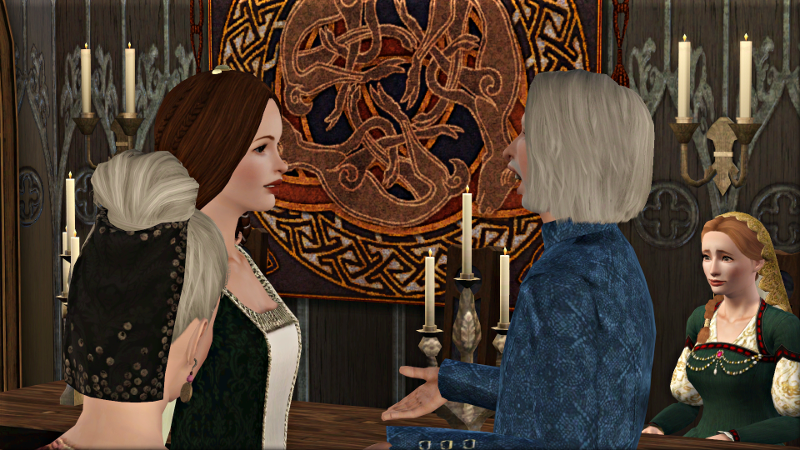 Next to greet them is the bridegroom himself. 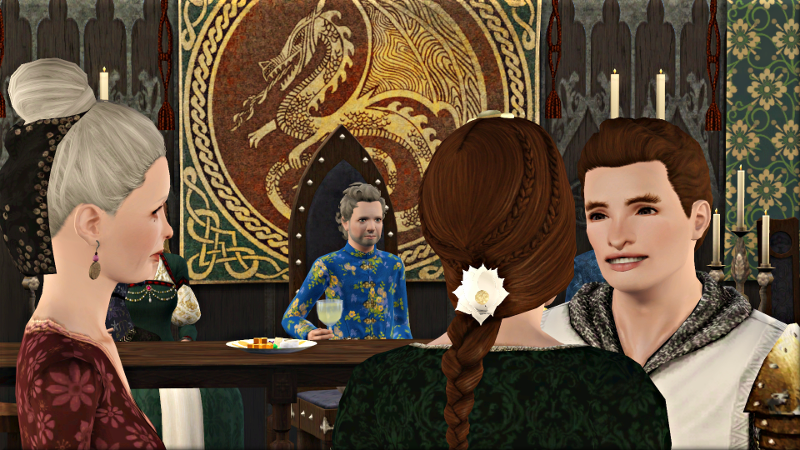 Simon is clean-shaven and still clad in squire’s white, but with his square jaw, broad chest and rich, confident voice he is unmistakably a man. Ewfame feels sure that he will give her daughter strong, brave sons.

It is an important day for the young man: he is not only to be married, but also to take his knight’s vows. When the time comes, he recites the sacred words, swearing to serve the Watcher and his liege lord in valour, honour and faith, to uphold order in the land, to protect the weak and support the poor, to respect the virtue of women, to meet challengers boldly, and to live his life by the knightly values of honesty, courage, justice, courtesy and perseverance. 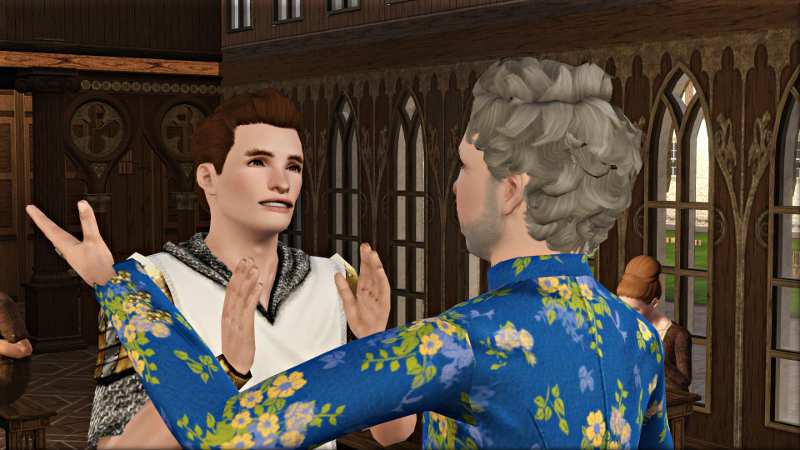 Simon’s father, Sir Geoffrey, looks proud of his son. He is very old now; Ewfame thinks he must feel glad to have lived long enough to see this day. 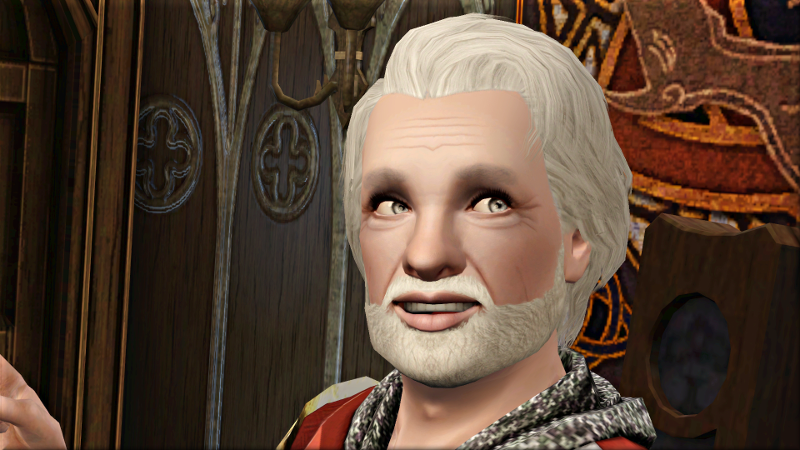 Lord Snordwich’s other knights are there too, ready to welcome Sir Simon into their brotherhood. Sir Vincent Le Roux is to be married today as well, to Sir Thomas Ros’ eldest daughter Marian. 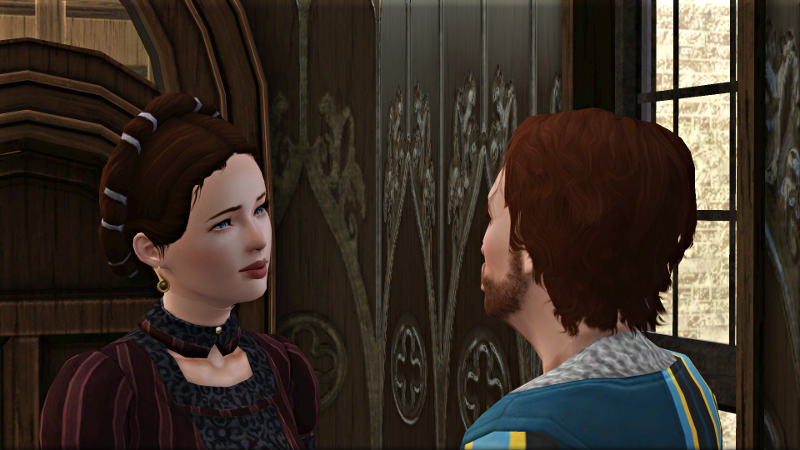 When the food and nectar are out, Lord Snordwich encourages the couples to stand and make their promises to one another. 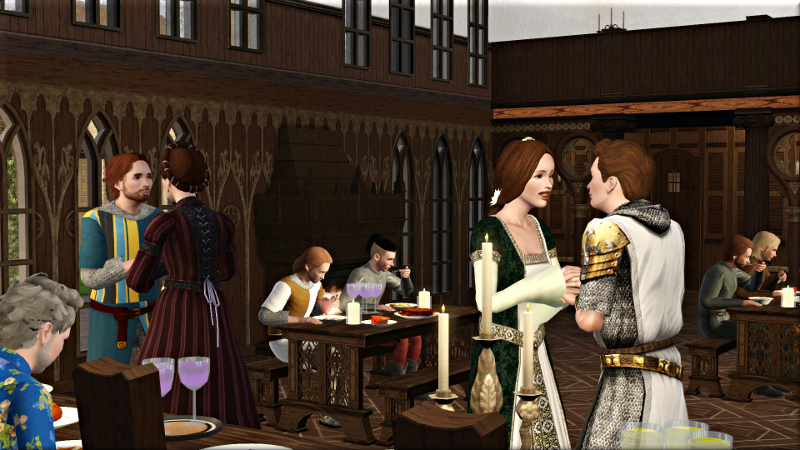 His chaplain blesses them all. 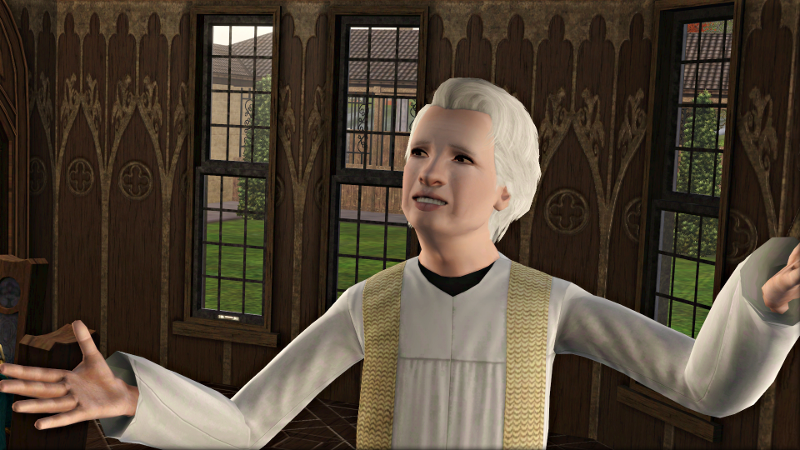 The newlyweds and their parents are seated in high honour, upon the dais with Lord Snordwich and his daughter-in-law. 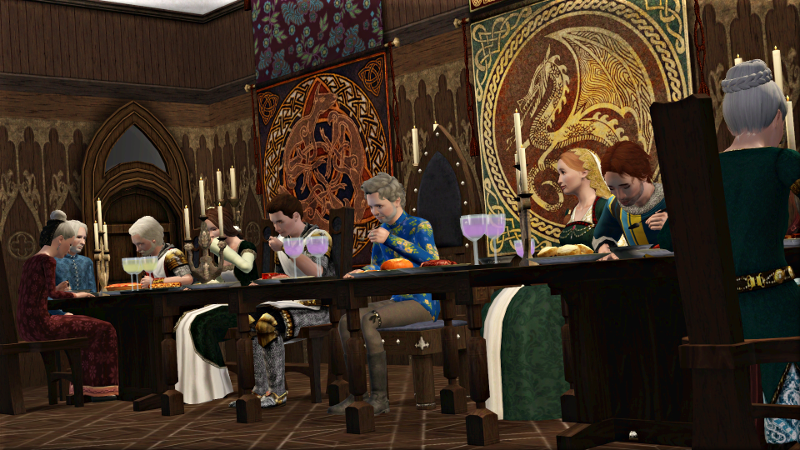 The baron explains that Lady Snordwich and his eldest son are both in their beds recovering from a winter chill. 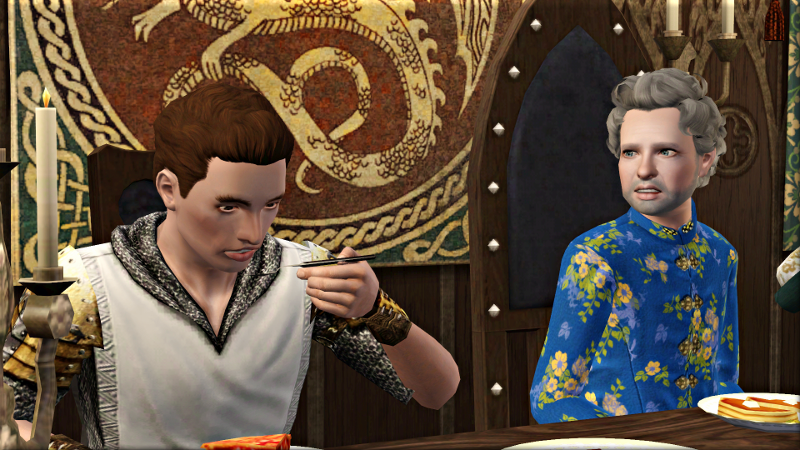 Ewfame’s own son Thomas serves the company at table. She hopes that she will be able to spend some time with him during her stay, but for now she is content to see how well he looks. 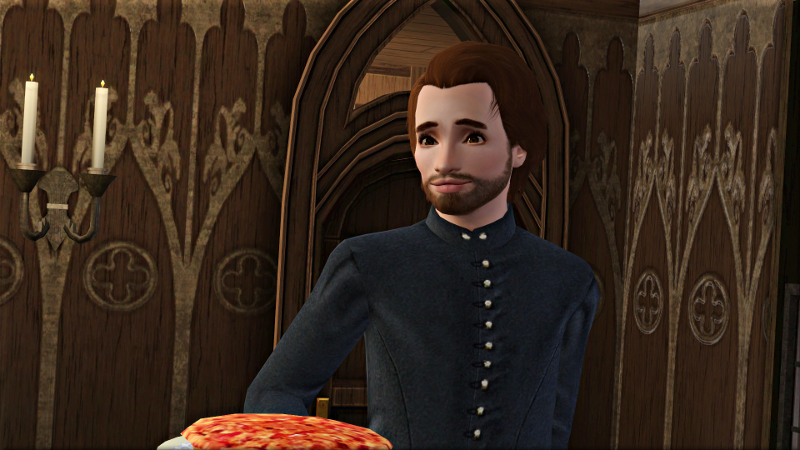 Thomas has her husband’s mouth and almond brown hair, but is in all other parts the living image of Ewfame’s own late father, an alderman in Crafthole. He was prosperous and well-connected but no gentleman. Her mother was higher born than him, the daughter of a second son of a country squire. She used to read Ewfame stories about brave knights, but surely could never have guessed that her granddaughter would marry one.

Ewfame herself could not have predicted it, not even when the son of a landed family came to town in search of a wife, and settled his sights on her. Like her mother’s father, Gilbert was only second born. But when his elder brother died without issue, the family manor was left to him.

She never made him happy, of course. She was too serious even for him, and could not adapt herself quickly enough to his different moods. She made herself so busy trying to please him, that she did not realise that he had made her miserable too. Now, watching Hilith laugh with her new husband and Thomas pour out nectar for his lordship, she hopes with all her heart that their children will be more content.

The company pauses their feasting for a few hours that afternoon to attend evensong. When they return to the great hall, they are served salmon, two kinds of broth, cheese, candied nuts, and sweet pastries full of jam—all lighter than the pies and roast meats they had at lunch, but set down with even more kinds of nectar. 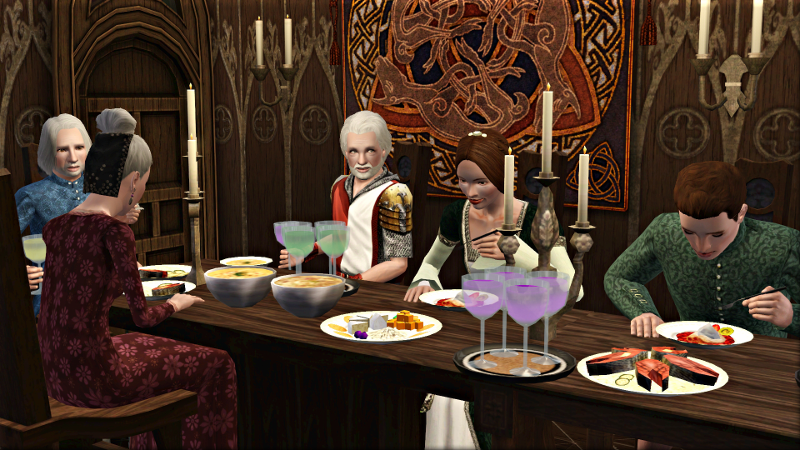 Simon looks worn out. He must have been up all night praying in the chapel; that is the custom before a squire takes his knight’s vows. Eventually, Lord Snordwich rises to announce that they had best see newly couples put to bed, or else, he says, Sir Simon will soon fall asleep at the table and leave his pretty wife a maid. 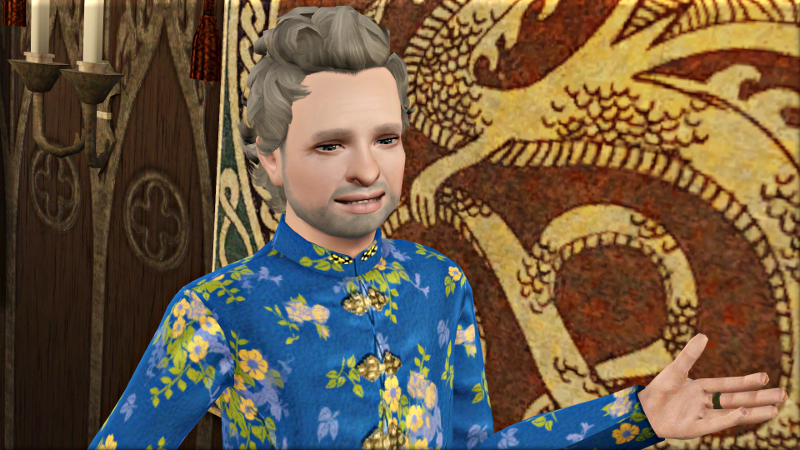 The wedding night is almost never a private affair, especially not when the bridegroom is his father’s heir. Even after both couples have at last been undressed and left alone, the other men do not disperse to their own beds, but stay close by for hours, singing songs and drinking in the hallway. 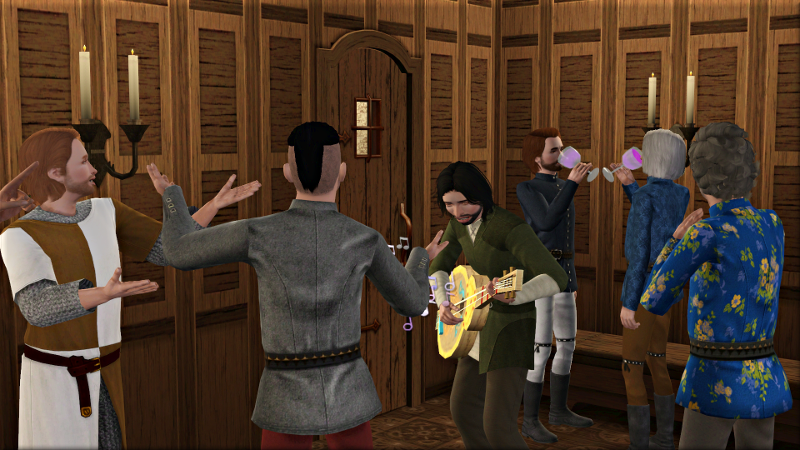 The following morning Ewfame walks in his lordship’s gardens with her daughter’s new family. Simon is more full of jests than she thinks a knight should be, and she finds him difficult to talk to whenever Hilith leaves her side. 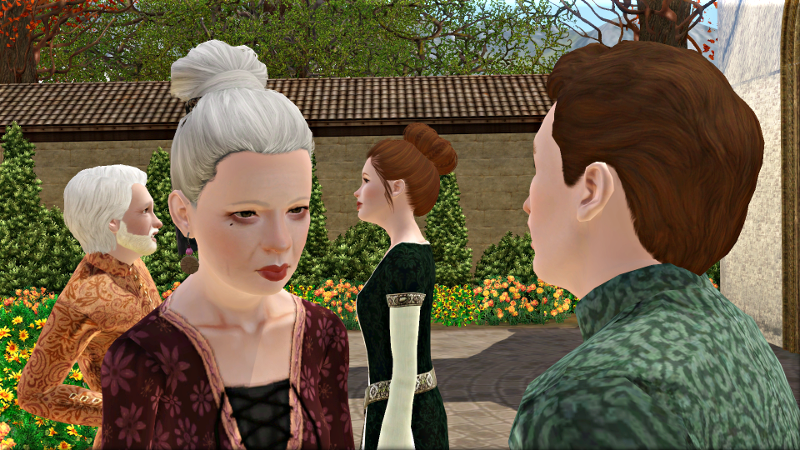 But he does have interesting things to tell them about the flowers in the garden. 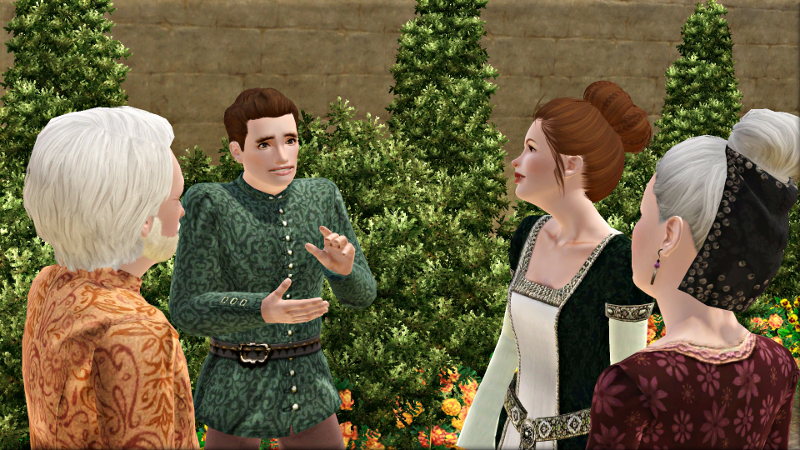 And she is heartened to see the affection that he and his father show one another. It is reassuring to know that her daughter will be entering a household already full of love. 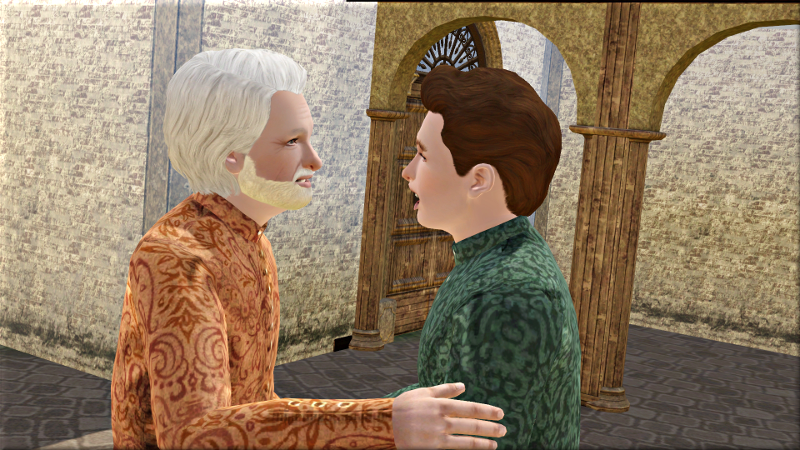 That afternoon, more guests arrive to wish the newlyweds well. Among them are Alice and her husband Sir Richard Fibrois. 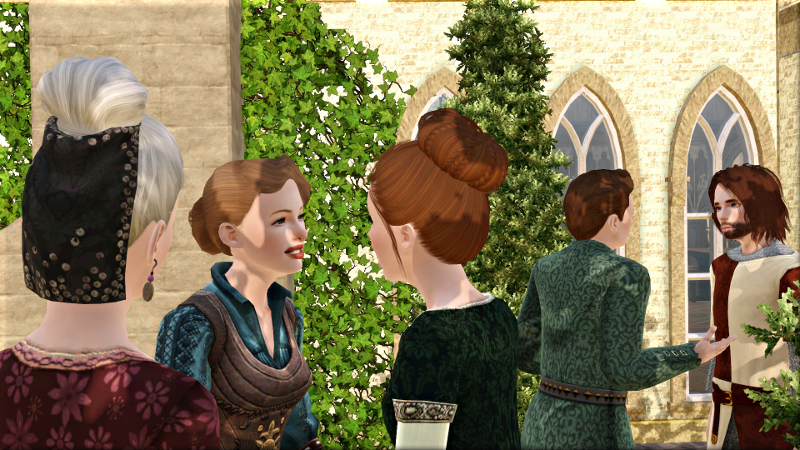 They have brought three of Alice’s sisters with them: Beatrice, Dominica and Margery.

Hilith is delighted to see so many of her friends. Felicia wanted to come too, the girls explain, but she is expecting her first child.

Ewfame does not see her son all day. He is waiting on Master Roger in his sick bed, she is told. In the evening, though, Gilbert brings her welcome news: she should expect Thomas back at Havlock Hall before the year is out. 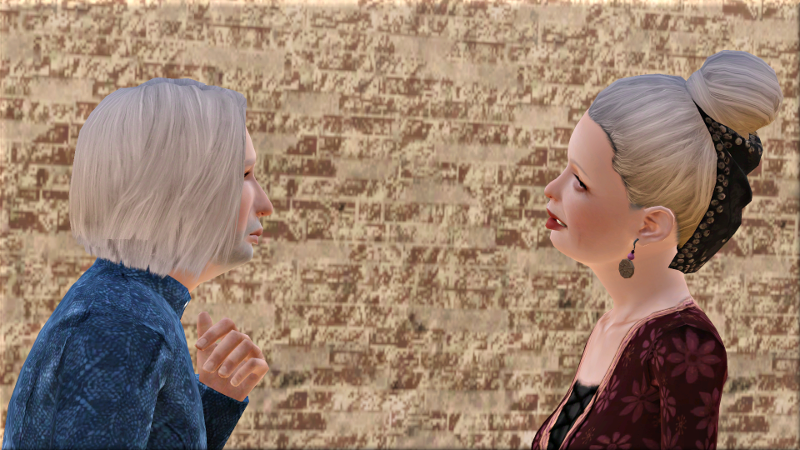 It will be wonderful to have her boy home, she thinks. She will show him how everything is done, from balancing the family accounts to the hearing of tenants’ suits. And the household servants will be so pleased to see him; his old nurse Margery, too.

Ewfame’s face falls when Gilbert tells her that he plans to come home himself, to show their son how to run the manor. 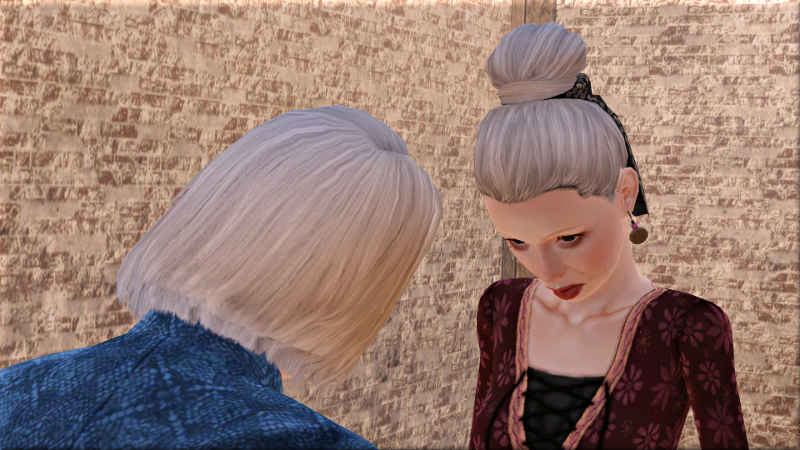