After half a week of fasting, the great winter Feast of the Nativity has arrived. Richard walks back from the midnight sermon with little Sabina asleep in his arms. 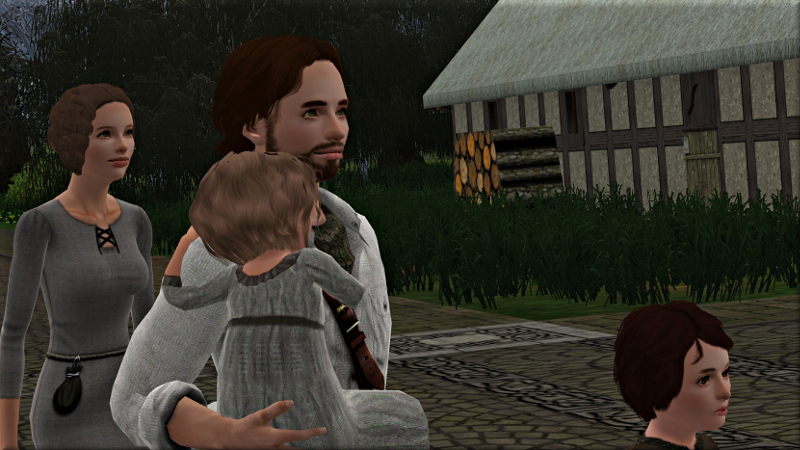 It has been a special evening—first a hearty meal to break the winter fast, then a beautiful Nativity’s Eve service, with candles everywhere and all the best hymns sung. It was daughter’s first, and probably the first that her older brother James will remember.

His wife sat by his side, looking as radiant as ever. All of their neighbours had put on their best clothes, but whenever he glanced over at Aelfgiva he thought no other woman more beautiful than her.

As soon as the children are tucked up, he tumbles her into bed. She smiles and pulls him close. Everything feels right with the world. 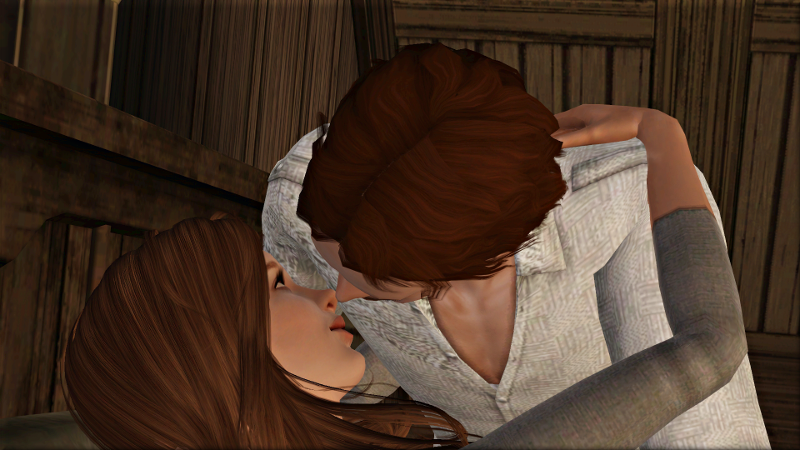 He and Aelfgiva have been married for over a year now. He has not been as faithful as he intended. It was not his fault really, he has convinced himself. He lasted all through autumn and winter, until a storm kept him in Crafthole overnight. When the innkeeper’s daughter offered him an extra piece of pie with his dinner in exchange for a kiss, he thought it a fine jest. He could not have known that she would find her way to his bedroll that night, or how lovely she would look with her yellow curls tumbling loose about her shoulders. After that no visit to the town seemed complete to him without a secret meeting in some quiet corner of her father’s inn.

Each time his wife welcomed him home, he quickly forgot his sweetheart.  He was almost relieved when his youngest brother insisted on taking over the market runs. As tactfully as he could, Mark made it clear that he thought him an impulsive, spendthrift fool, with no sense of what anything was worth, who could not be trusted with the family purse.

Mark runs everything now; Richard is happy to let him. It hurts his head to think about what bottles of nectar they have left in their cellar, or how much wood they should set aside for winter fuel.

But he is still head of the household. The village children call him Goodman Brewer, and at church he and Aelfgiva always sit in his parents’ old pew, not too far from the front of the nave. At Lord Snordwich’s Nativity Day feast as well, they are closer to the dais than any of the other villagers. Richard is delighted to have such a good view of all the acrobats and minstrels vying for his lordship’s attention. 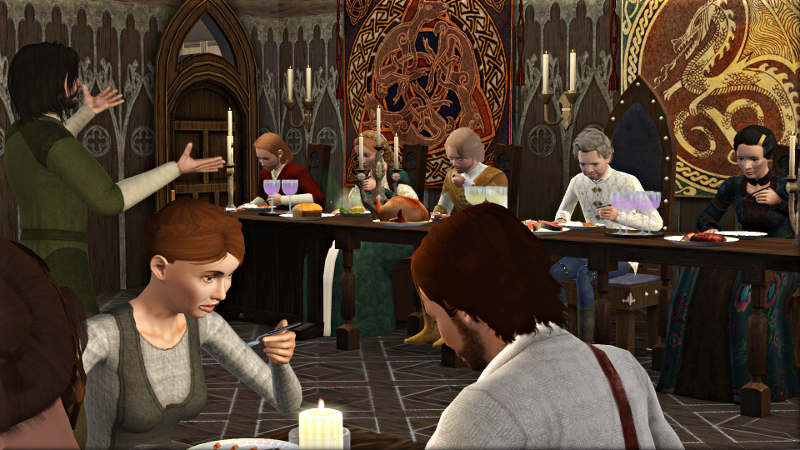 He loves, too, to look at the noble family in their delicately embroidered gowns and tunics. He is drawn especially to the young master’s wife, with her sad, grey eyes and haughty mien. His gaze is easily drawn away—to admire a juggling trick, or his own wife’s lovely face—but whenever it returns to Mistress Matilda, he is surprised by her beauty all over again. 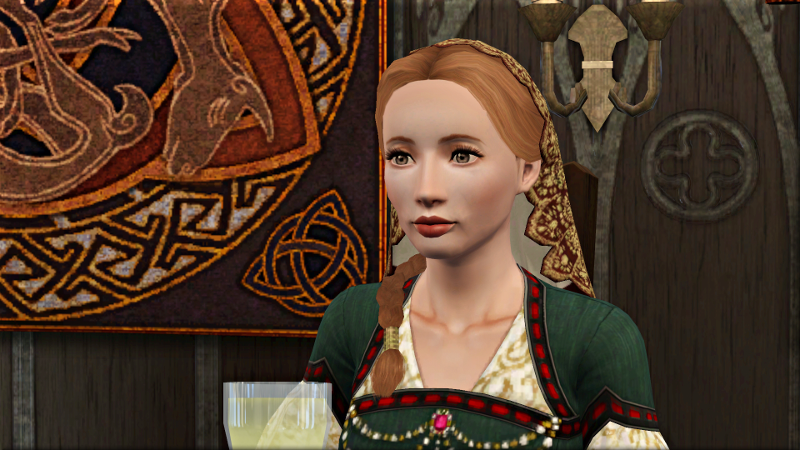 Aelfgiva enjoys the festivities too. The food is better than it has ever been this year, she is sure. 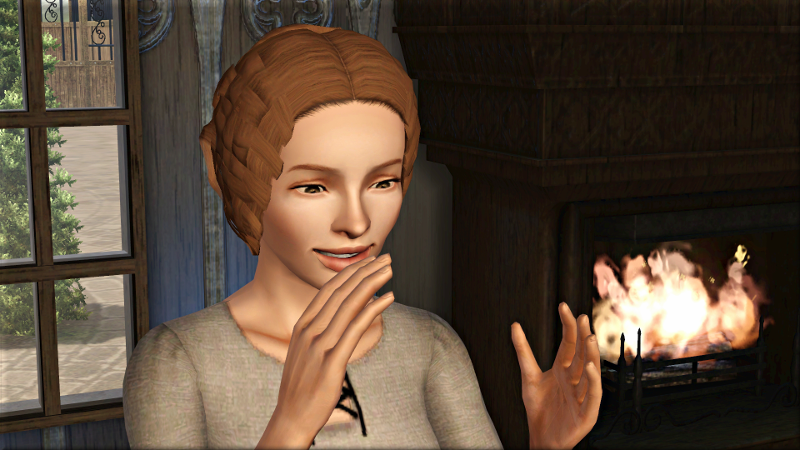 She looks over at her huband, smiling happily. She thinks she has some good news for him, but wants to be certain before she tells him.

After lunch, they visit Ralf in the kitchen. 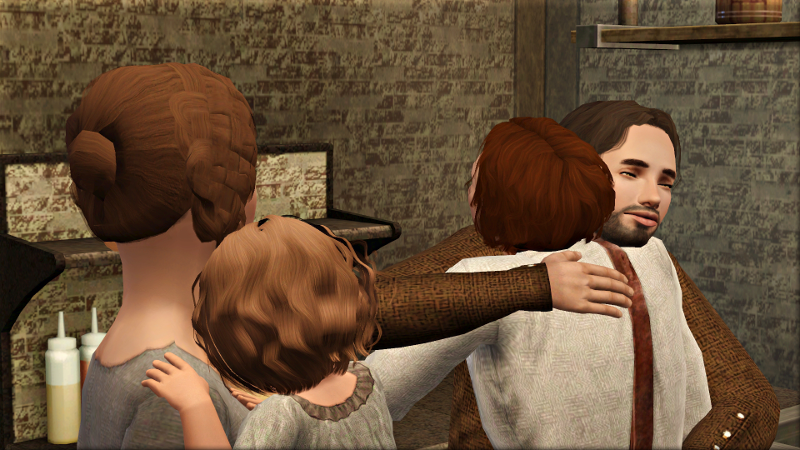 He has happy news too: he has persuaded his master to give him five days off this year, to marry his dear Tephna. He will take them whenever he will least be missed, perhaps during the Feast of the Watcher, when most of the household will be in Burdley for a wedding. 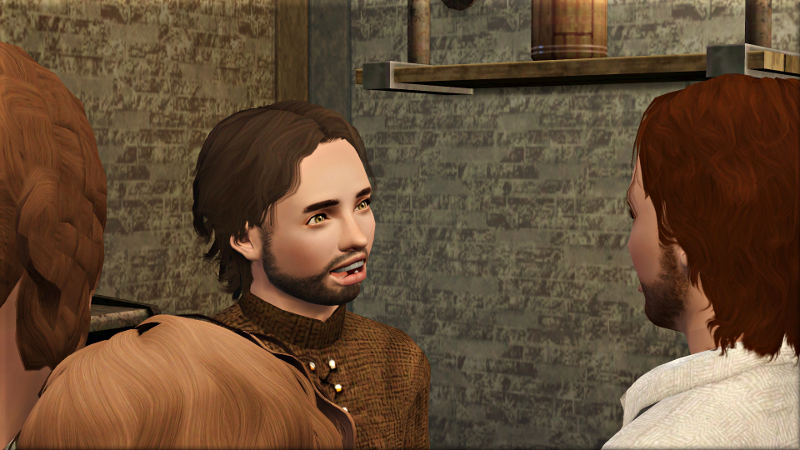 Richard grins and claps his brother on the back: it is about time, he tells him. Aelfgiva is delighted too. It will be wonderful to see Ralf and Tephna wed after all this time. She only pities that they cannot live together, in perfect happiness, as she and Richard do.

Later that evening, as she gets ready for bed, Aelfgiva notices how much her body has changed over just one day. Now she feels confident enough to tell her husband that they have a third child on the way. 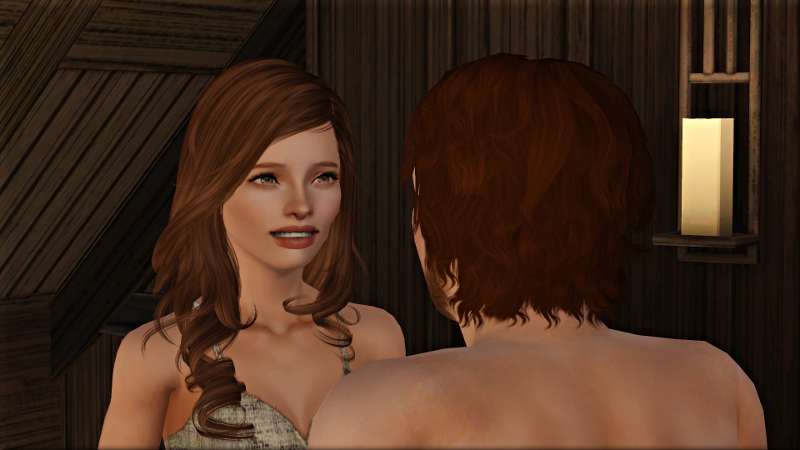 Richard is overjoyed. Lifting up her shift to kiss her belly, he tells her how beautiful she looks—that seeing this way reminds him of their wedding night. 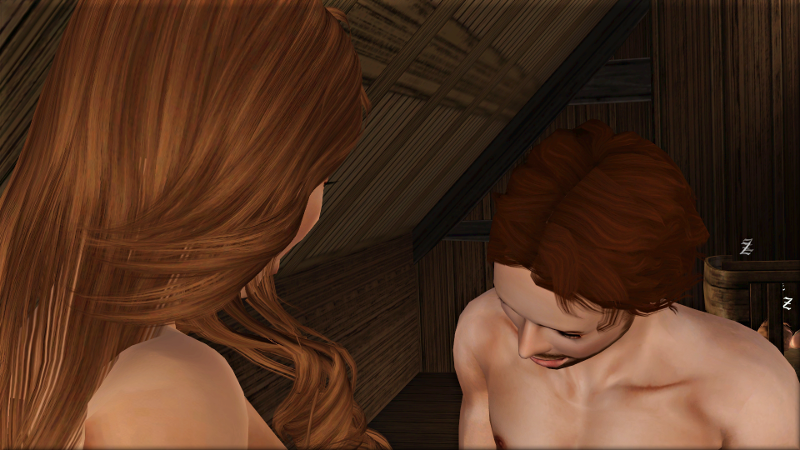 First thing in the morning, Aelfgiva slips out to visit her sister’s house. She wants Rikilde and their brother Robert to be the next to know about the baby. 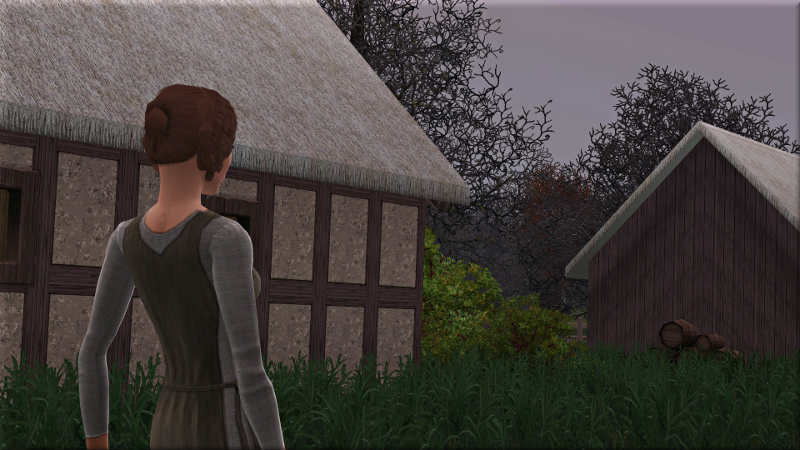 Robert coos and chatters to her swollen belly. 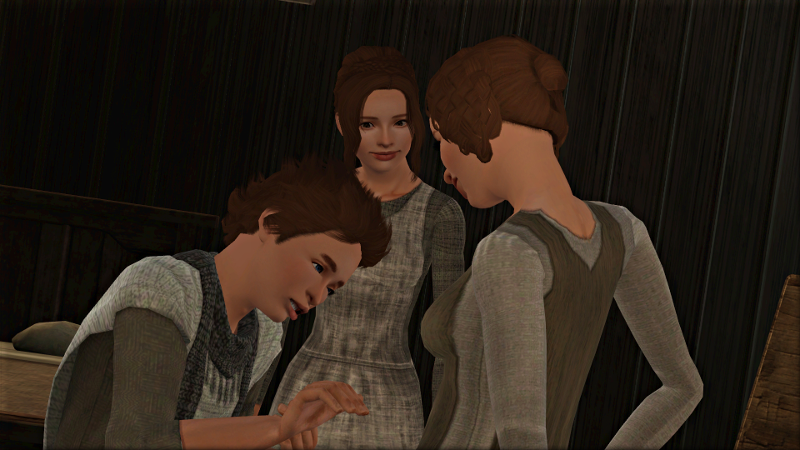 Rikilde seems happy too, but a little distracted. She keeps looking anxiously over to where her mother-in-law rests in bed. Poor Juliana is very weak now, finding it difficult even to form words. 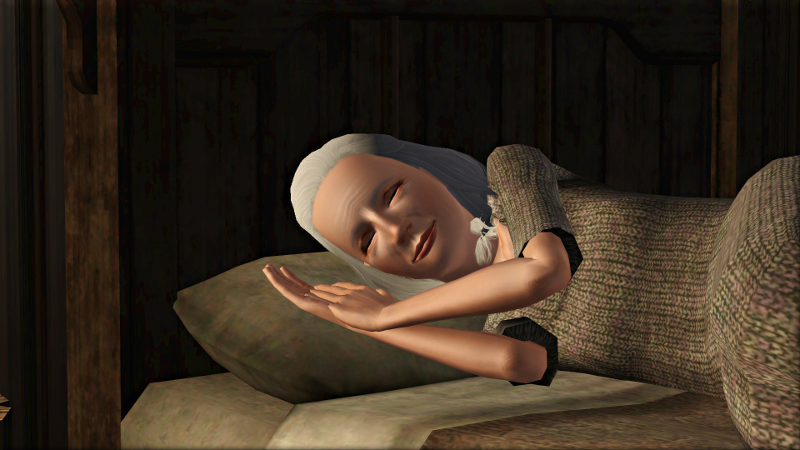 Growing up, she was like a second mother to all the Fowler children. Aelfgiva remembers running to her for comfort when their father told her he might not have long to live.

Aelfgiva sits with her for the rest of the morning, talking softly to her. 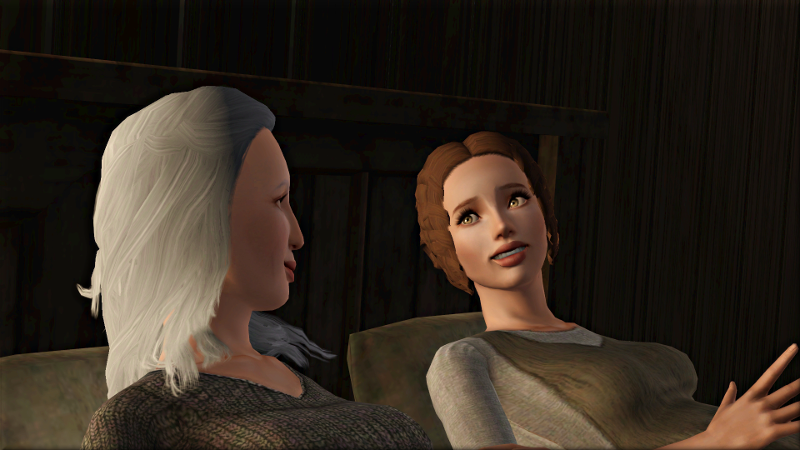 When she finally looks out of the window, she sees that hours have passed. Sabina will be missing her. The baby will come tomorrow, but she promises she will return every morning, as soon as they have had their blessings. 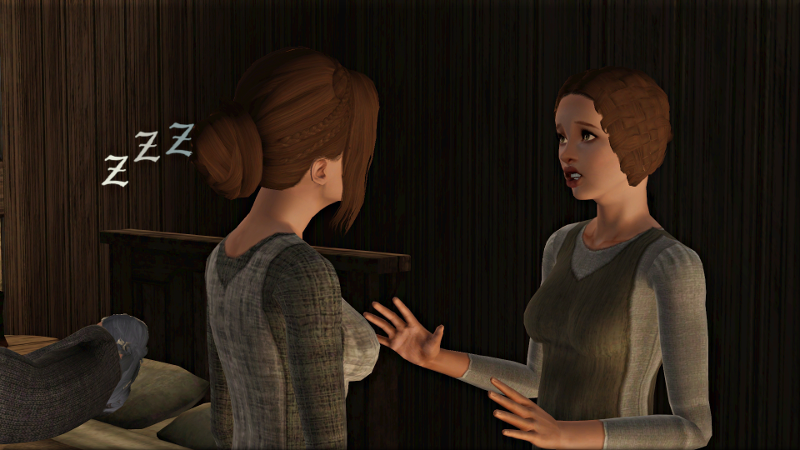 At home, she finds her little girl playing with her toys. James is out with his Uncle Mark, learning to ride. 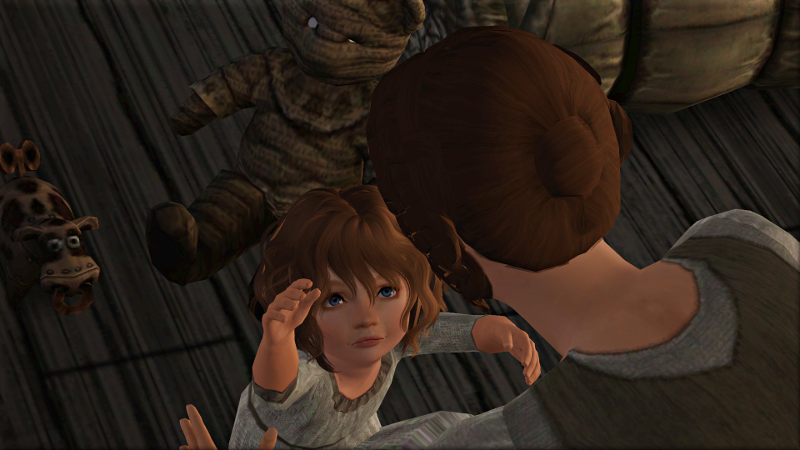 Aelfgiva feeds her a little bread, mashed up with warm cow’s milk. 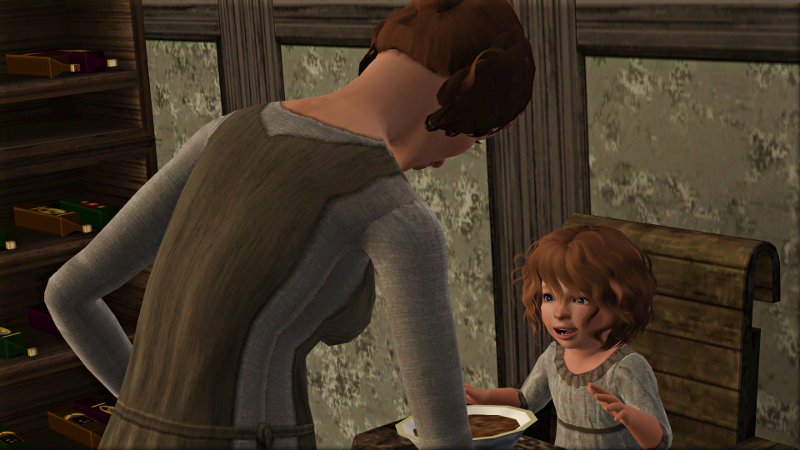 Her husband sings to himself as he helps his sister Aphra with the lunch. It should be her task, really, Aelfgiva thinks, but Richard likes to do it so very much. 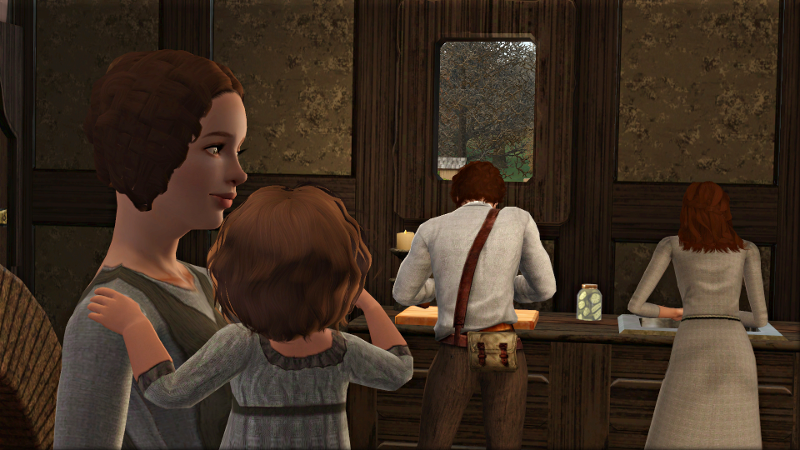 Throughout the day, various neighbours come in to buy bottles of nectar for their New Years’ lunches. Everyone is delighted by Richard and Aelfgiva’s news. 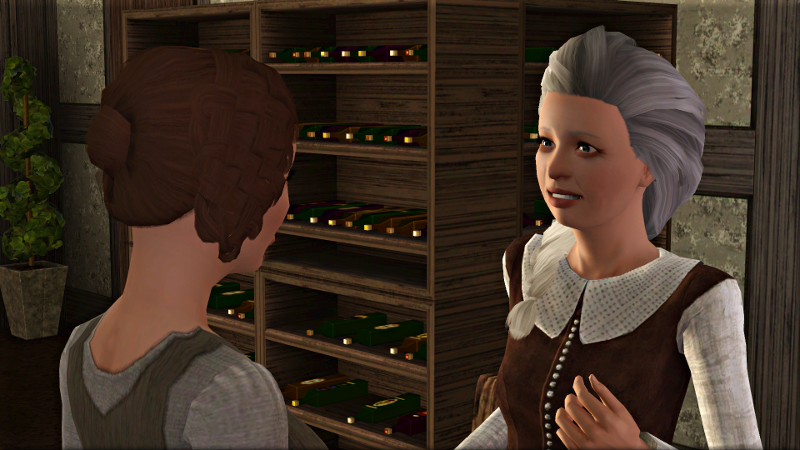 James is looking forward to having another brother or sister. 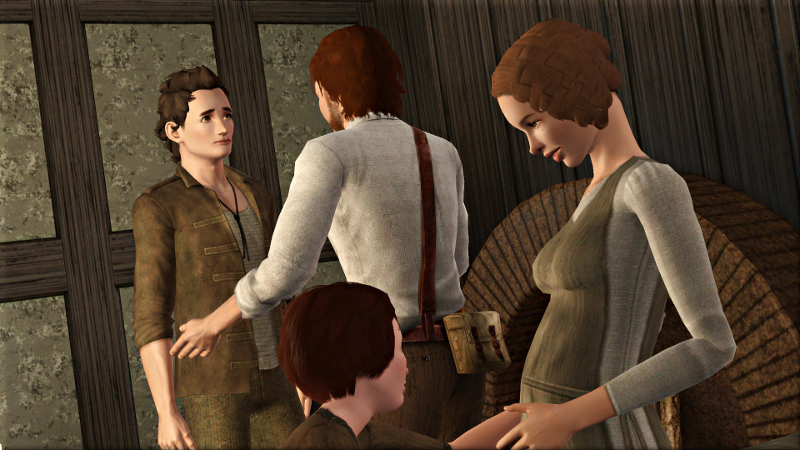 By later afternoon, the tavern is full of villagers ready to see in the new year. 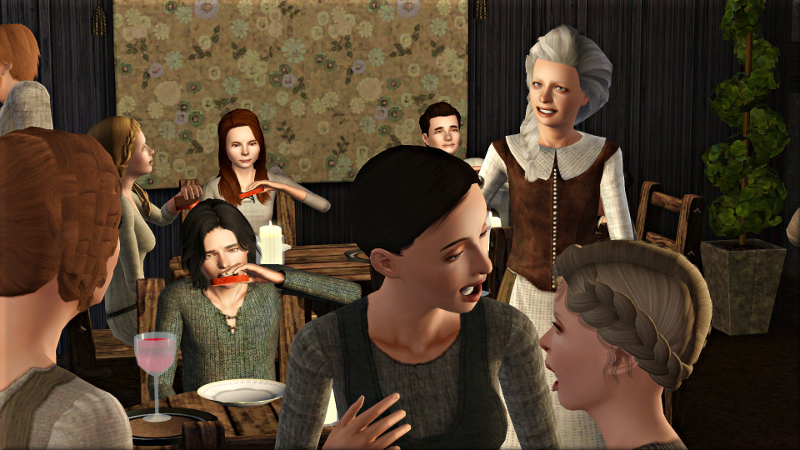 Marks sits quietly by the fireside, watching everyone congratulate his sister-in-law. 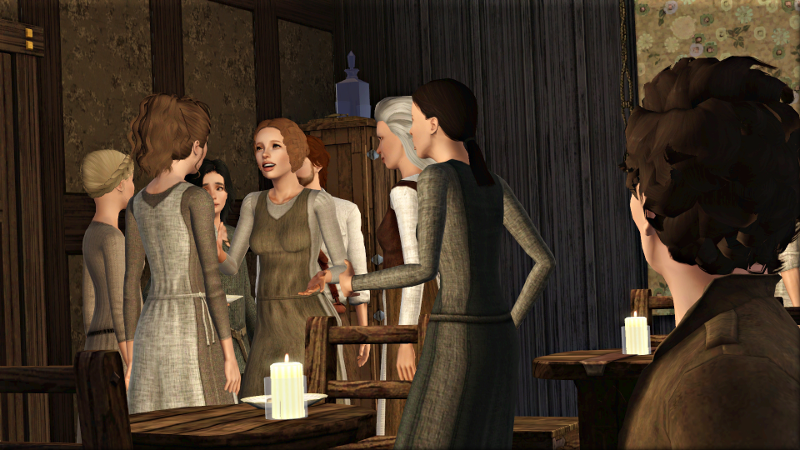 He loves Aelfigva dearly. She is kind and hard-working, and has been a good friend to him ever since he was a little boy. He only wishes she had brought some household goods with her, or that her sister’s family was not so poor. And now she and Richard are expecting a third child, just over a year into their marriage. Surely they will be parents nine times over before they reach middle age!—fine enough if the rest are boys, who may find work, but if they are all girls…

He keeps a careful eye on Richard to see what nectar he is opening. Mark has hidden their very best bottles away at the back of the racks; had he not, Richard would go straight for them every time they had anyone over. 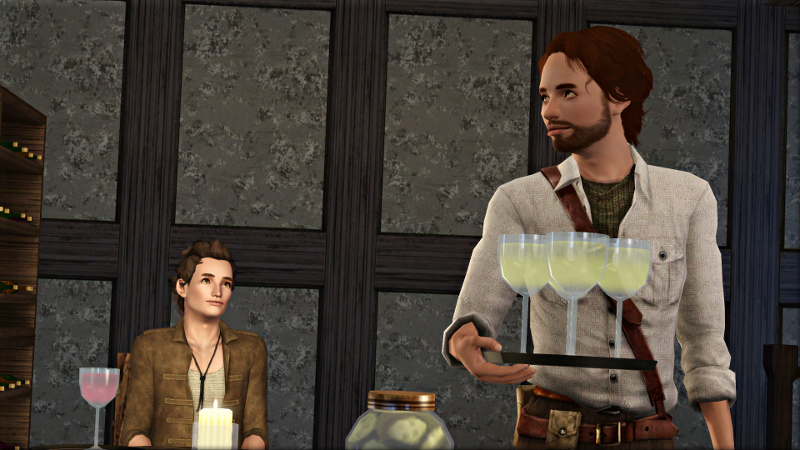 Mark starting helping his father with the books as soon as he learned to count, but he never really had to worry about money until his parents passed. Now, with the way Richard is, it is impossible not to. Every time his elder brother went to market, he would come home with some new trinket for Aelfgiva, until Mark started going in his stead.

Mark has no wish to hoard the wealth they have. We brought nothing into this world, their mother always said, and can take nothing out. But he wants to make sure they have enough to spend on things that matter: rent, food, and fuel; clothes suited to their station; their licence to sell their nectar, and so keep their parents’ legacy alive; acts of charity and hospitality to maintain their neighbours’ respect and his lordship’s approval; and, when the time comes, burial plots closer to the church and to the Watcher’s grace.

Seeing Richard sit down with their friend Gilbert, Mark rouses himself from his thoughts and crosses the room to join them. He knows Gilbert’s mother is sick, and wants to ask after her.

Richard and Gilbert are talking about Gilbert’s marriage prospects. He is determined to have a great love affair, but his ailing mother has told him that he must have it within the next few weeks, for she wishes to live to see him wed. 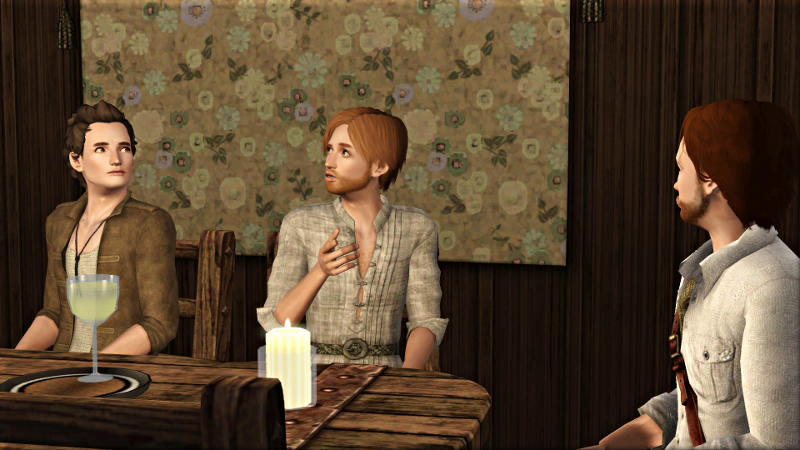 Gilbert has already chosen his wife, although the girl herself does not know it yet. It is golden-haired Oriel, the old baker’s second daughter. Richard heartily approves, declaring her the most beautiful maiden in the village.

On the other side of the room, Oriel is cruelly teasing Emma Cotter. 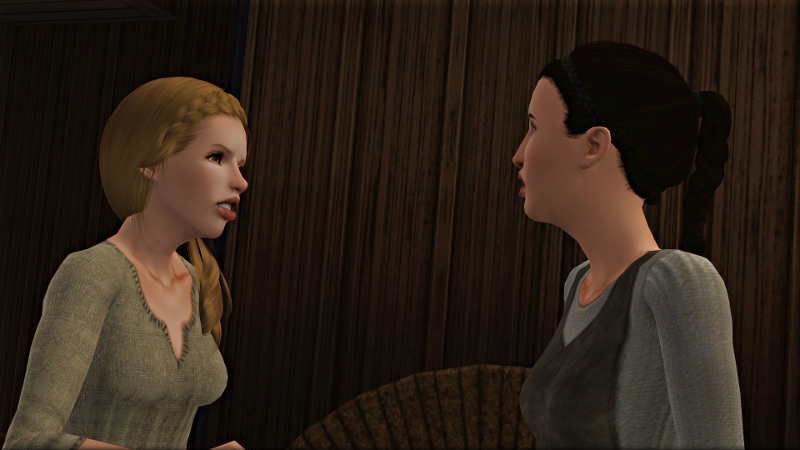 Mark watches as Tephna tries to separate them, and ends up getting pulled into the argument. 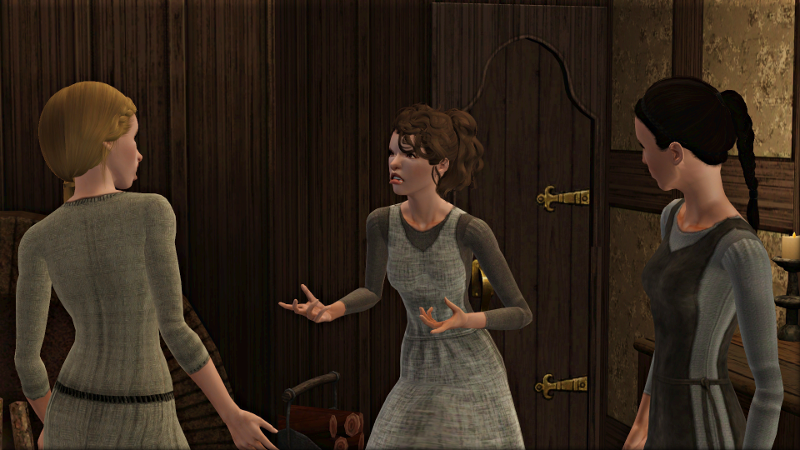 The Widow Yates has to step in to quiet them all down. 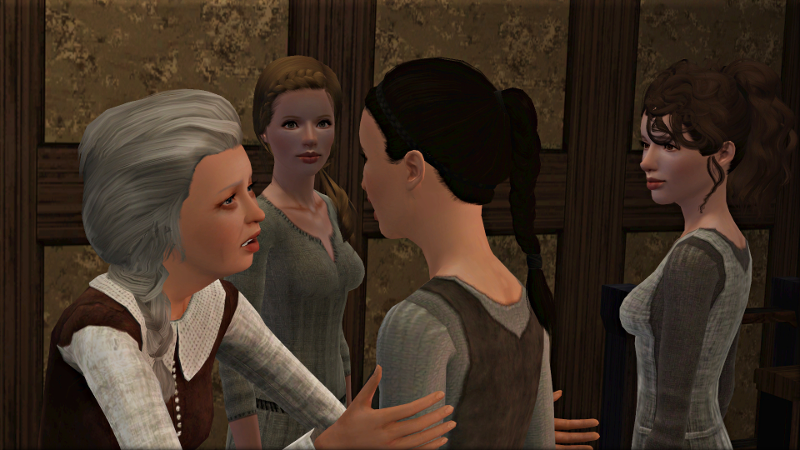 Mark asks whether Gilbert might not be happier with someone less…unkind. Their sister Aphra is not too much younger than him, modest, affectionate, an excellent cook…

But their friend is clearly infatuated. And Richard eggs him on: already they are planning out how best to woo the pretty baker’s daughter. 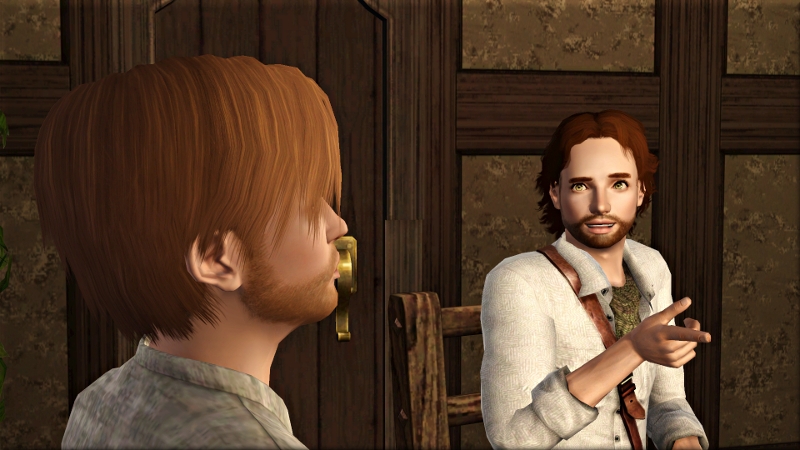 Richard once tried to woo Oriel for himself, Mark remembers, before James was born. No doubt he wants a second attempt, even if it is for Gilbert this time. Exasperated, Mark wonders off to find his sister.

Aphra is outside, near the sleeping horses. She has always found large crowds a bit too much. 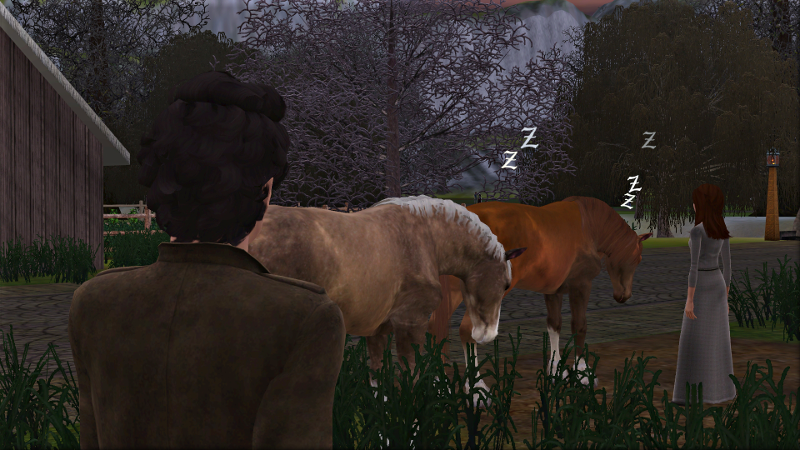 She smiles at Mark as he sits down beside her. As they gaze silently up at the night sky, he feels, despite all his worries, that life is sweet. 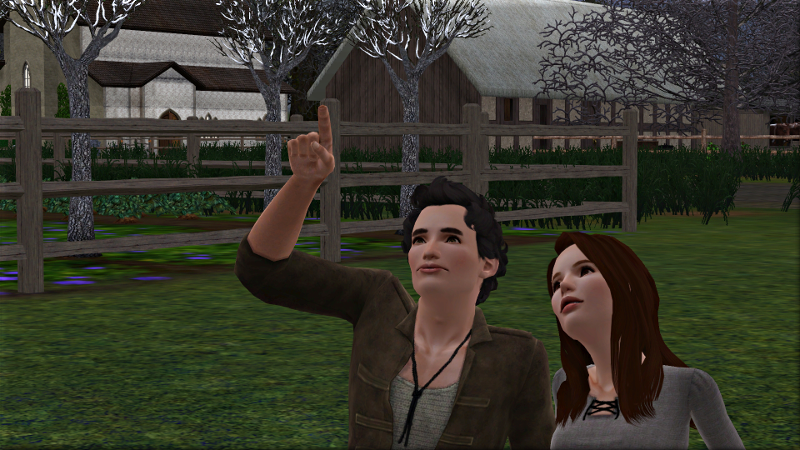