I’m a little embarrassed to admit that it’s been about a year and a half since I last updated this legacy! I’ve just been really tired, and not feeling inspired to finish up the builds I needed to proceed with this save file.

Anyway, it’s back now, and I apologise for the delay. I’ll try to keep a better balance from now on between this legacy, my Snordwich Chronicles, my Barnacle Bay builds, and other miscellaneous uploads.

And now for a quick refresher, since it’s been so long: in each generation of this legacy, I have my heir explore three skills, and only these three. I try to do most of the opportunities and skill challenges, except where they’re buggy or really boring, and/or I’ve already been through them in my EP Legacy.

This is our current heir, Carter Simovitch-Grisby. His traits are disciplined, photographer’s eye, adventurous, no sense of humour, family-orientated, hopeless romantic, and social butterfly. 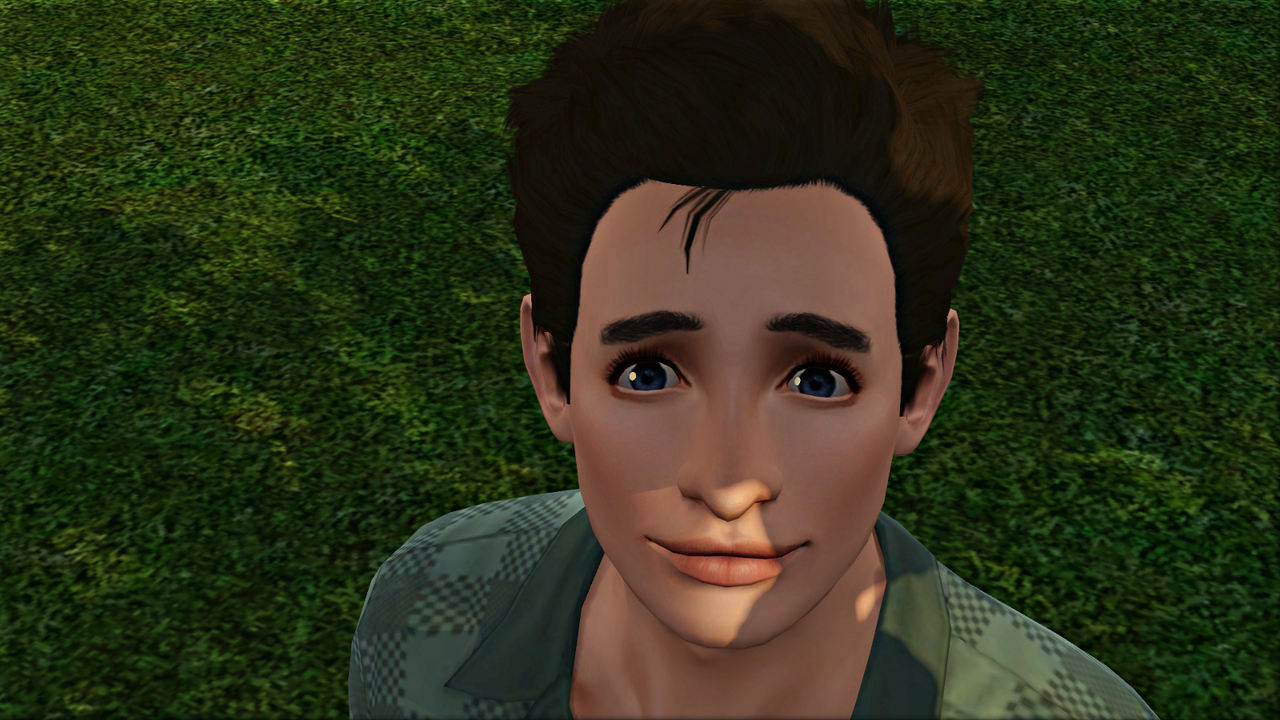 Carter’s three skills are photography, mixology, and martial arts. Although he already maxed out photography and mixology during parts nine to eleven, he will continue to make drinks and take photographs while I work on his lifetime wish, to become a martial arts Grand Master.

During our time in Riverview, the household had accumulated over a million simoleons, but I thought it might be interesting to make cash flow an issue again by giving Carter only 16,500 simoleons with which to start. Any special objects I have stored in the household inventory (like his camera and his mum’s paintings) I’ll let him eventually ‘buy back’ with cash he earns. I might continue to reset the household funds like this every couple of generations, so that I get to build both a starter and a mansion for each world we live in.

This is the little house I’ve been working on for Carter. 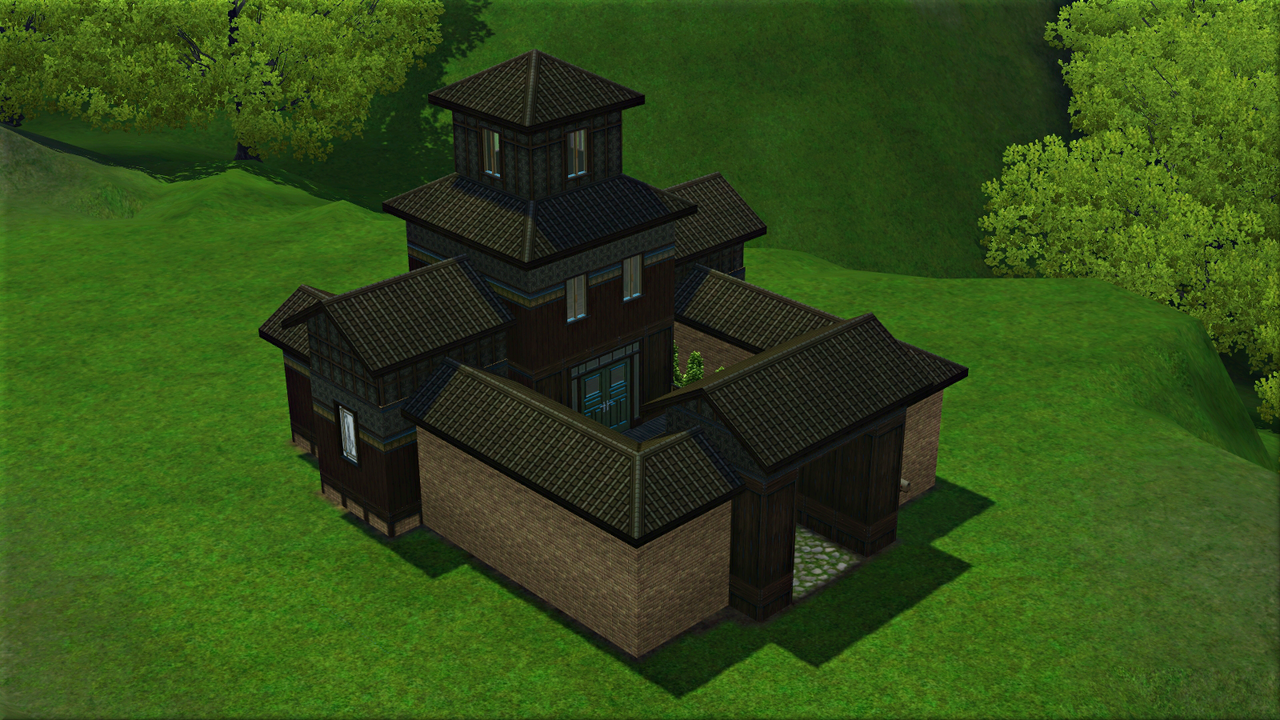 Buying it left him with just 20 simoleons and no furniture, but that was round about how his grandfather Arjan started out too. I’ll be using Nraas Careers: Self-Employed to allow Carter to earn money from martial arts matches, and I’ll also have him consign some of the photographs he takes.

Before he could register as self-employed, though, he needed one point in the martial arts skill, so I sent him up to the Academy. It was only 8am, but there were already sims there training: special merchants Bao Louie and Ho Sung Kim. 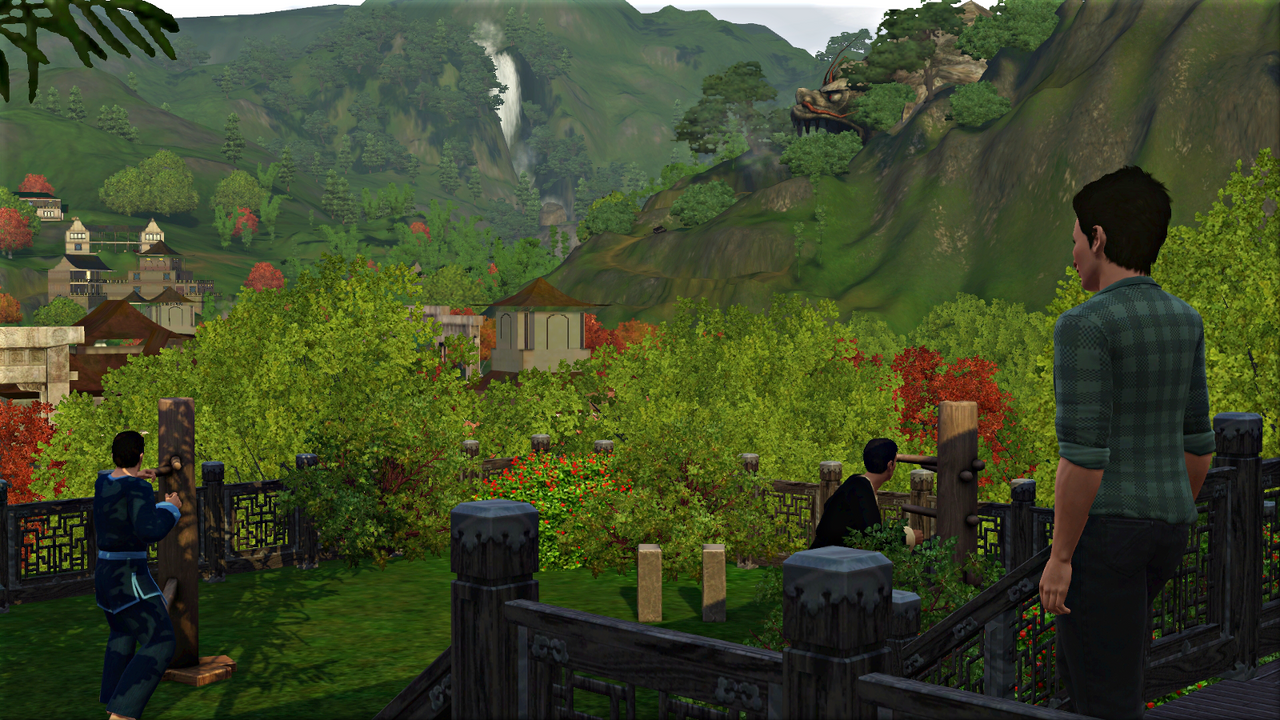 Carter gave a friendly introduction to them both, which, in Shang Simla, means a bow. 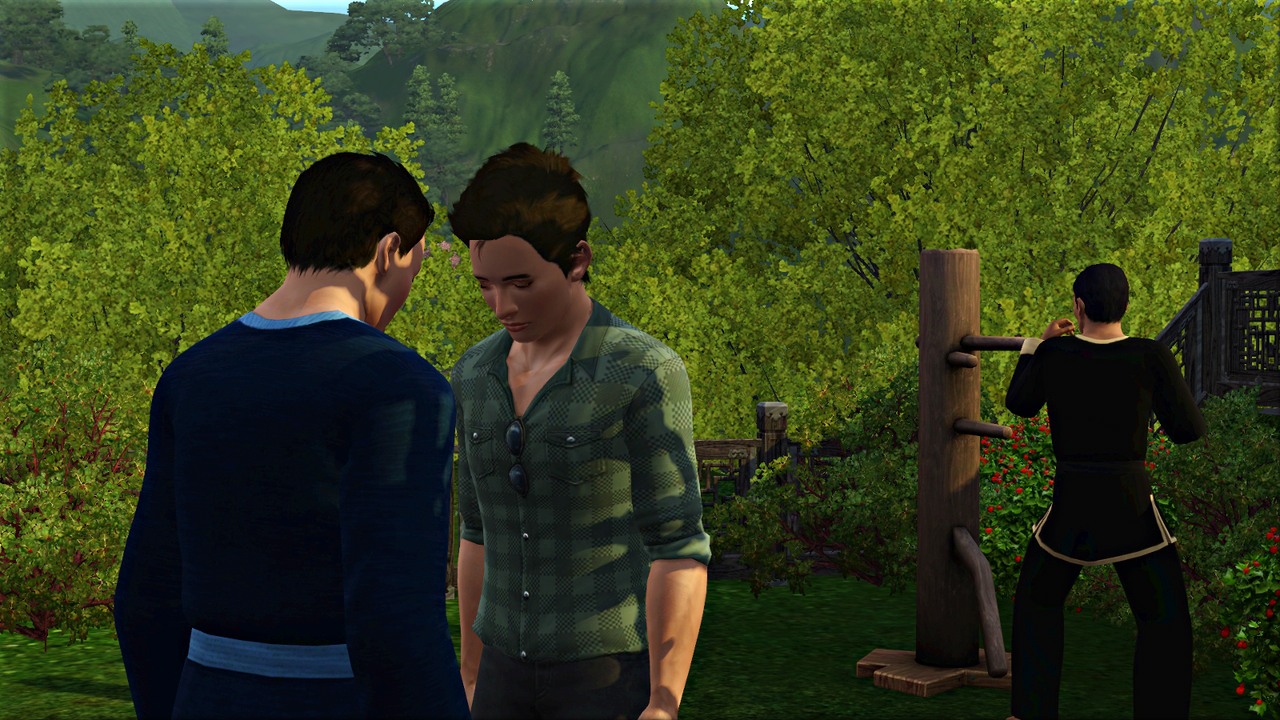 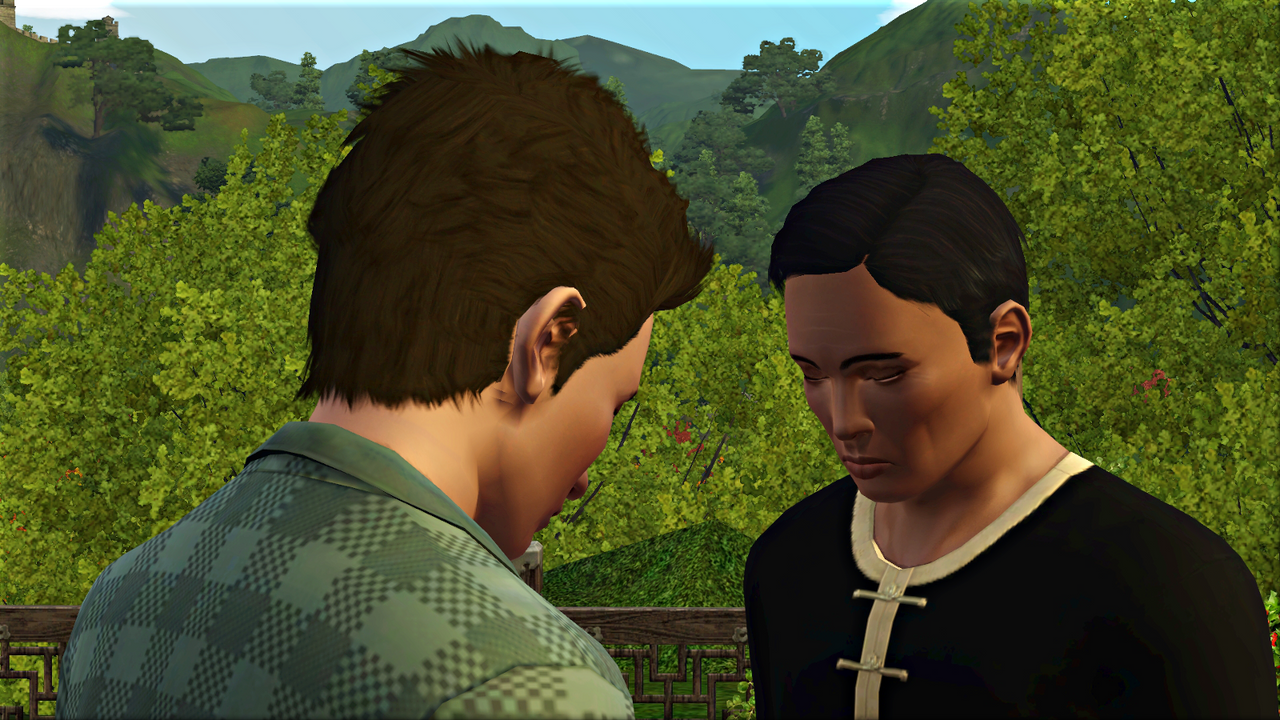 Bao got back to training while Carter and Ho Sung discovered that they share the hopeless romantic, family-orientated, and adventurous traits. 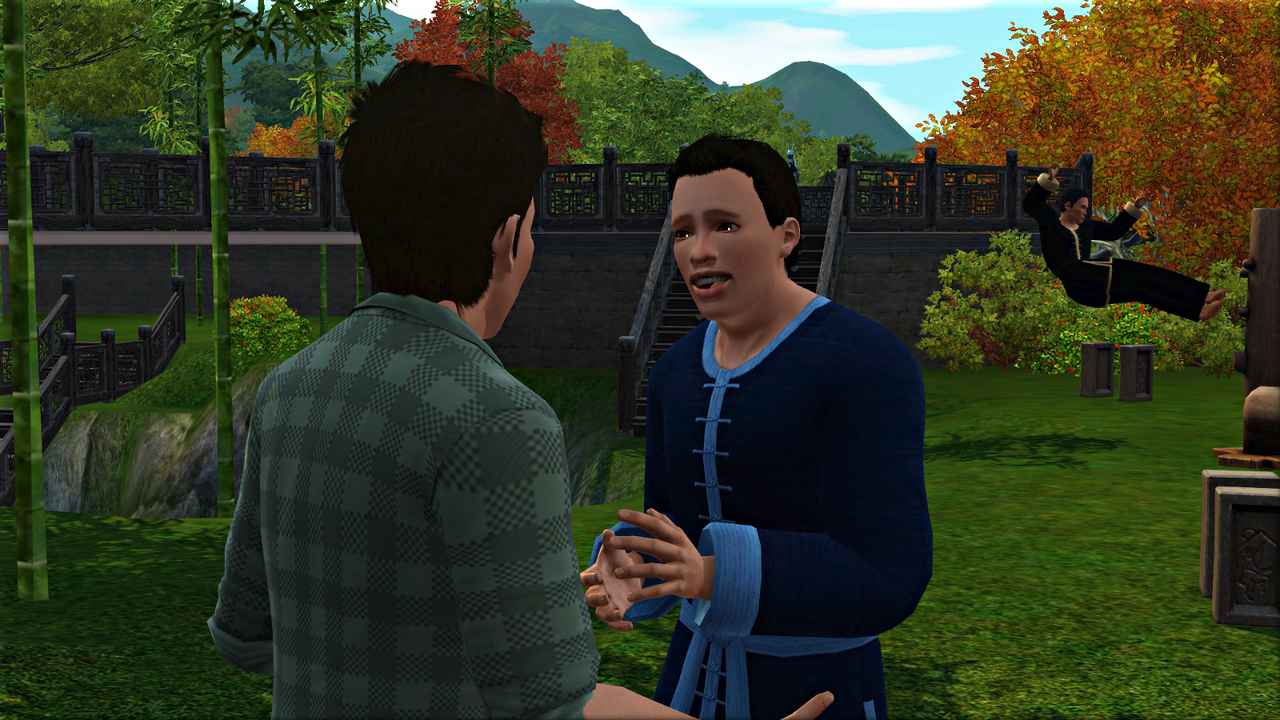 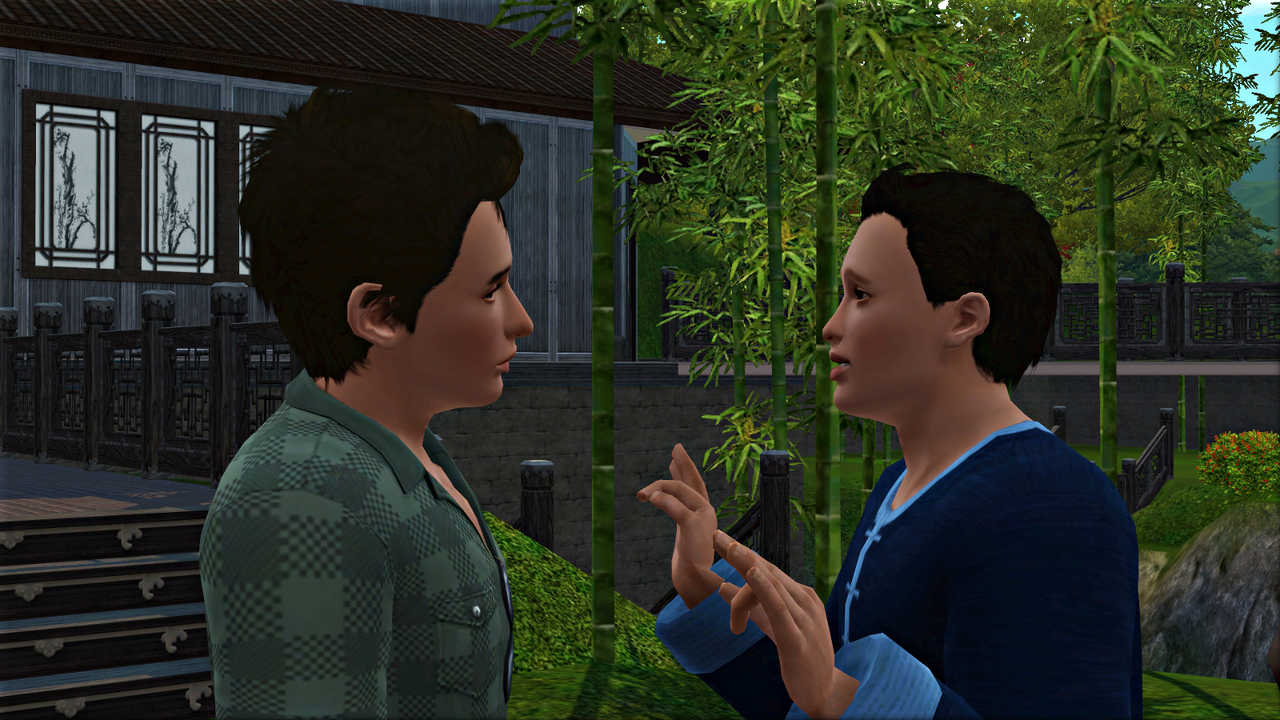 He was impressed by Carter’s trivia knowledge. I remember this from when we in Riverview, actually: Carter’s the only ‘no sense of humour’ sim I’ve ever played that everyone’s just been immediately charmed by. 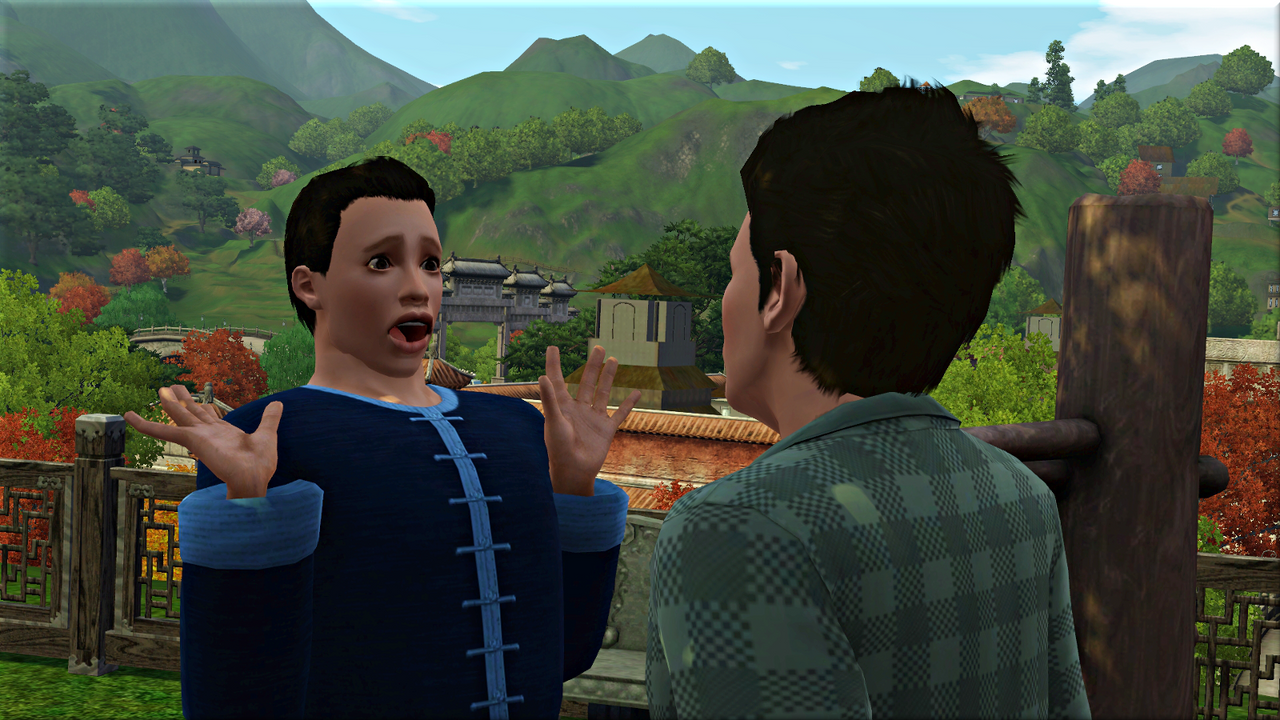 I figured that was enough socializing to keep Carter from freaking out about feeling invisible for a little while, so I had him get to work on his martial arts. He wasn’t very good at first. 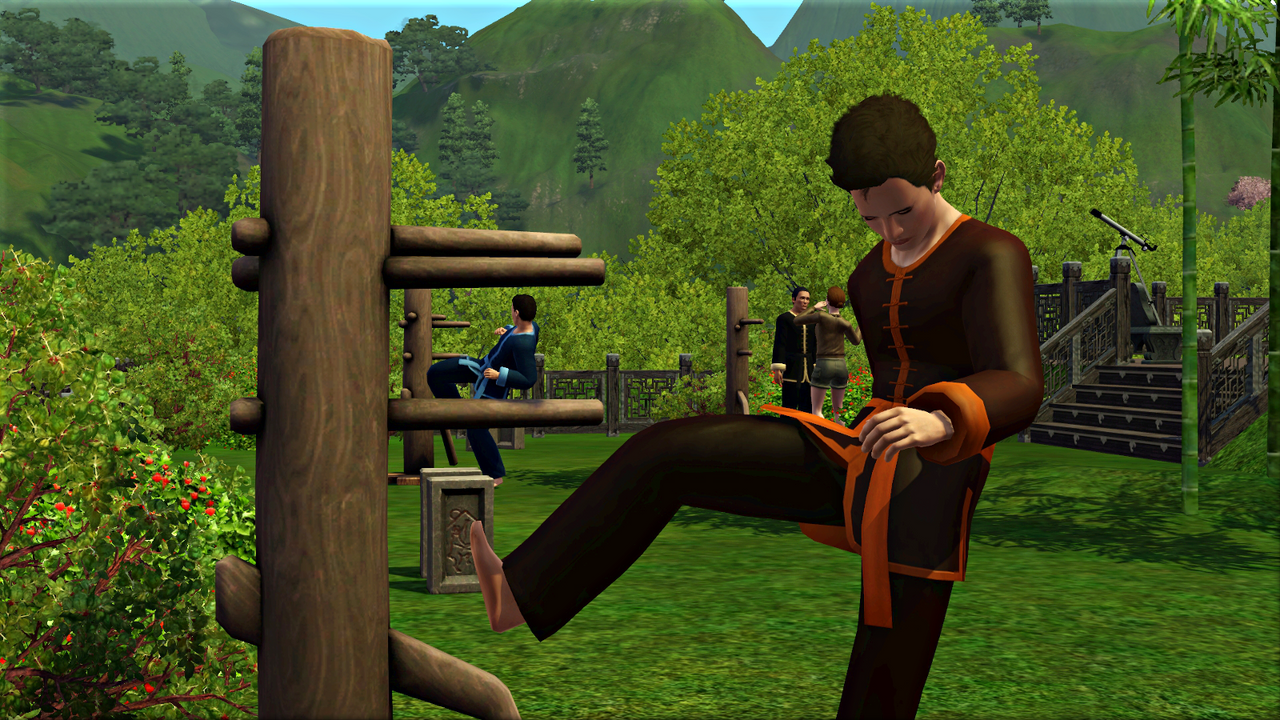 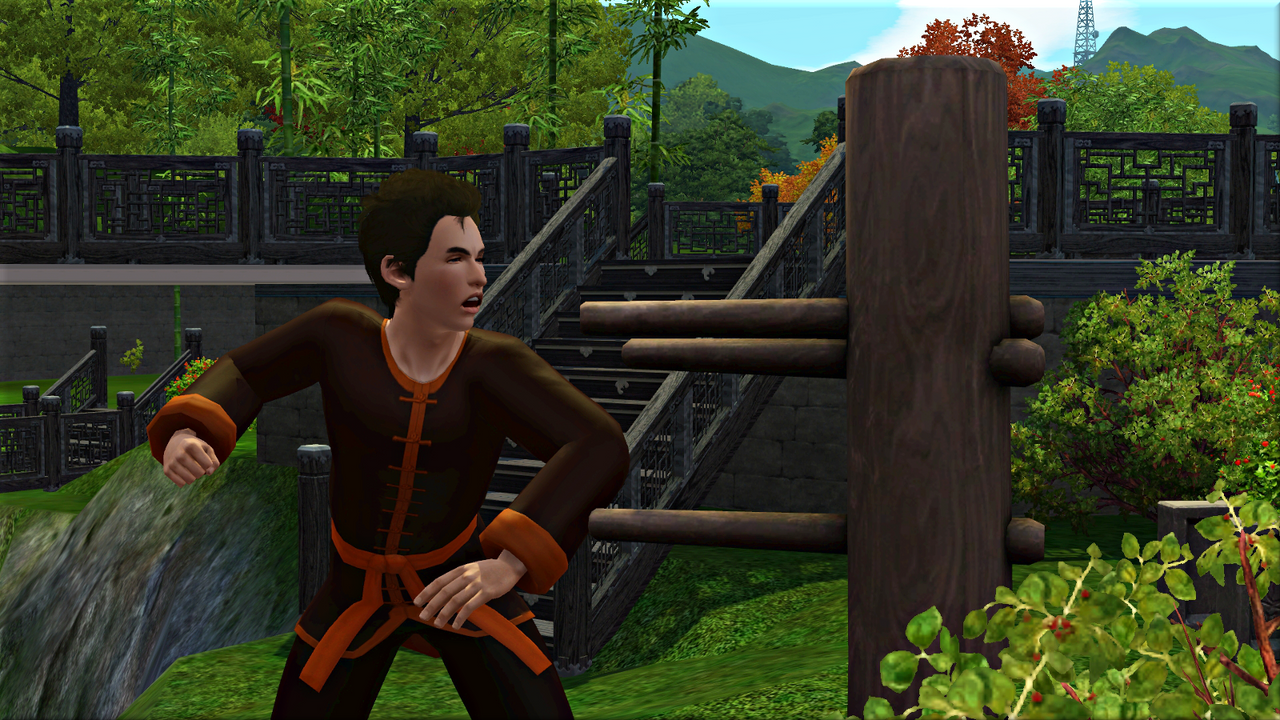 I’m not sure why he’s got an orange belt already; that’s meant to come with level 3.

By early afternoon Carter had earned his first skill point and was ready to spar. His athletic skill got leveled up along the way, which technically breaks the rules of the challenge, but there’s not much I can do about that now; I just won’t have him actively work on it.

For some reason he couldn’t spar with Ho Sung or Bao—perhaps because they’re special merchants?—so I sent him to the Forbidden City in search of an opponent. There, he ran into Ho Sung’s sister Sun Young, and asked her to spar. 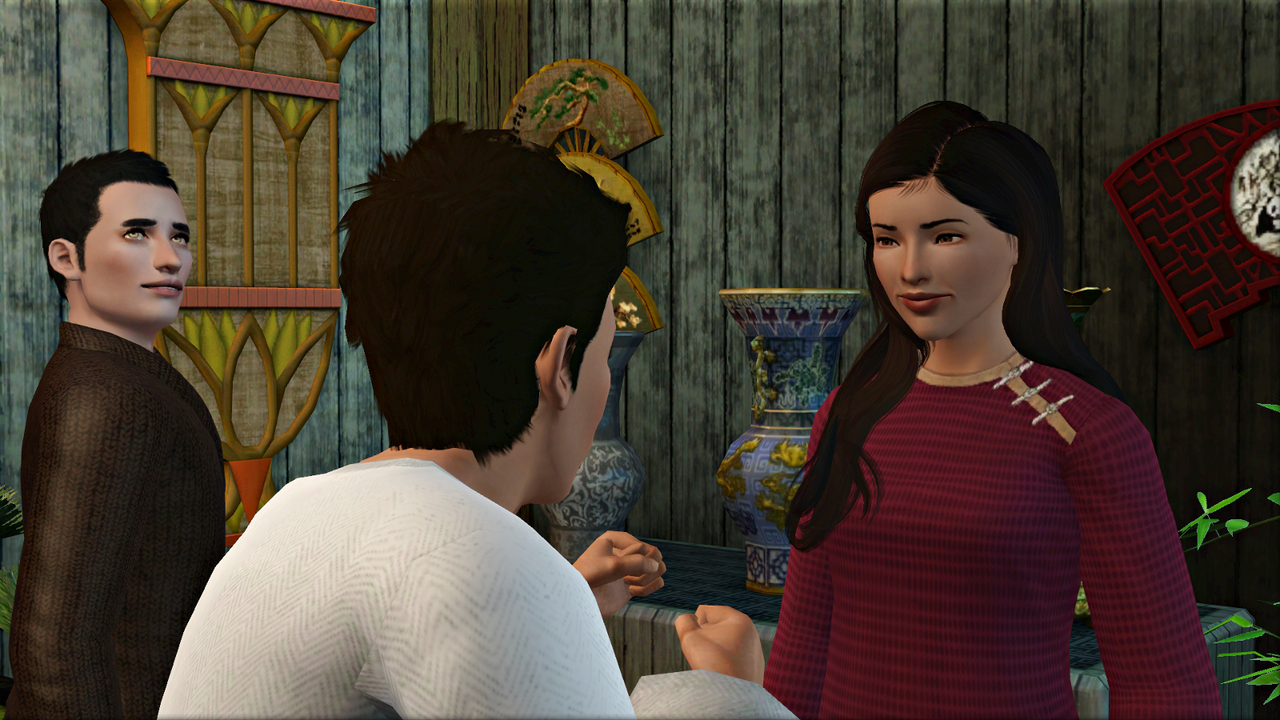 She was two levels above him, so I expected her to kick his ass, but he held his own, and actually ended up defeating her 2-0, earning himself 12 simoleons. 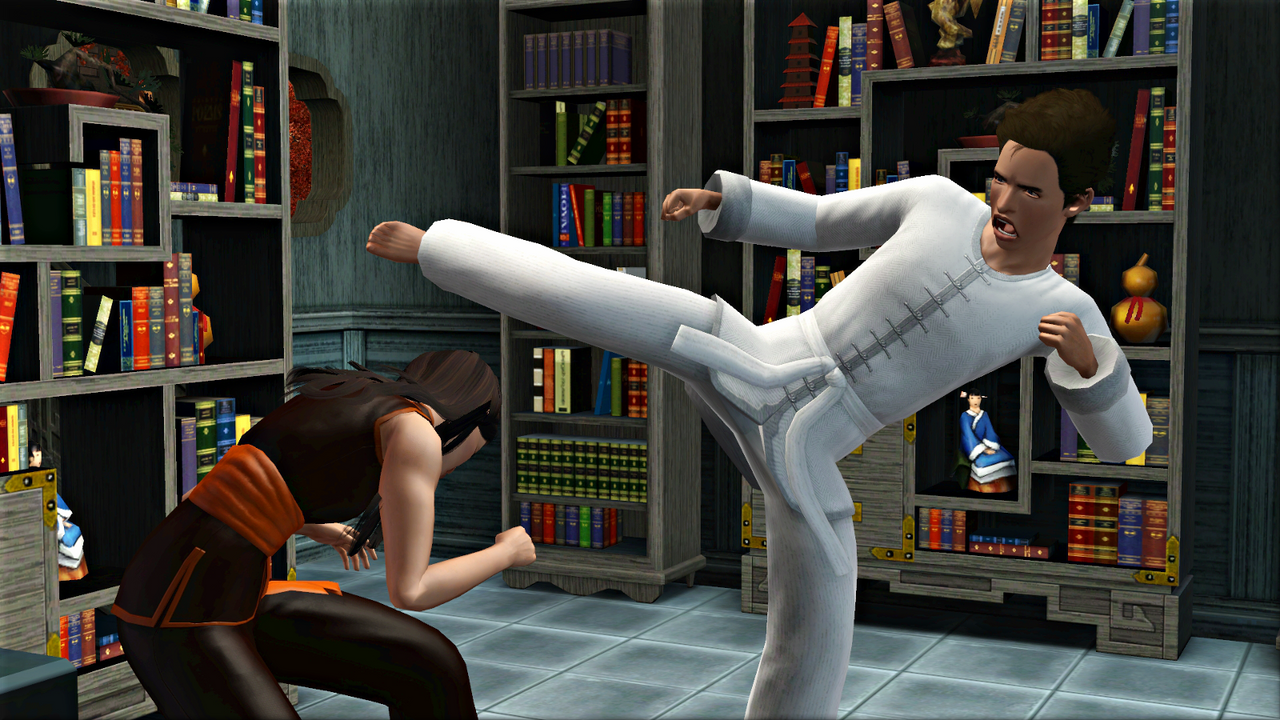 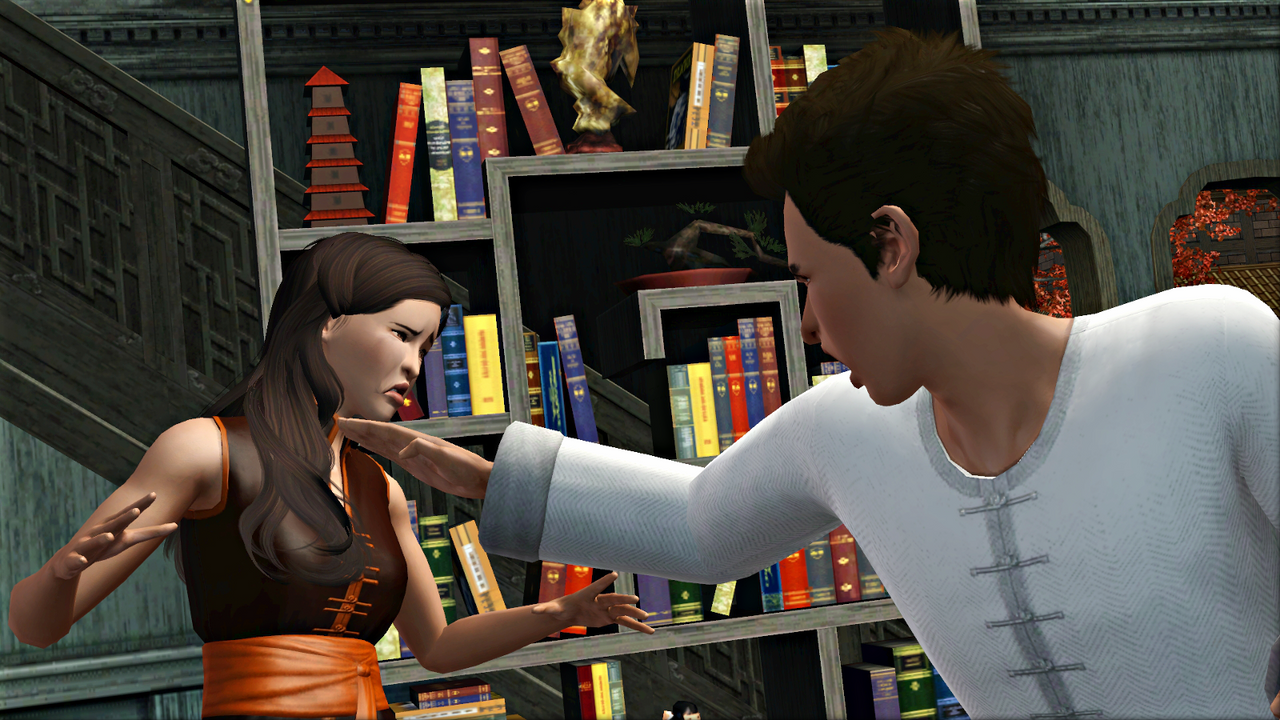 After the match, Carter crossed the square to visit his Aunt Paula, who lives in Shang Simla with her son Thomas. I moved them over here with a few other of my ongoing inactive households, and it was about time Carter went to say hi. 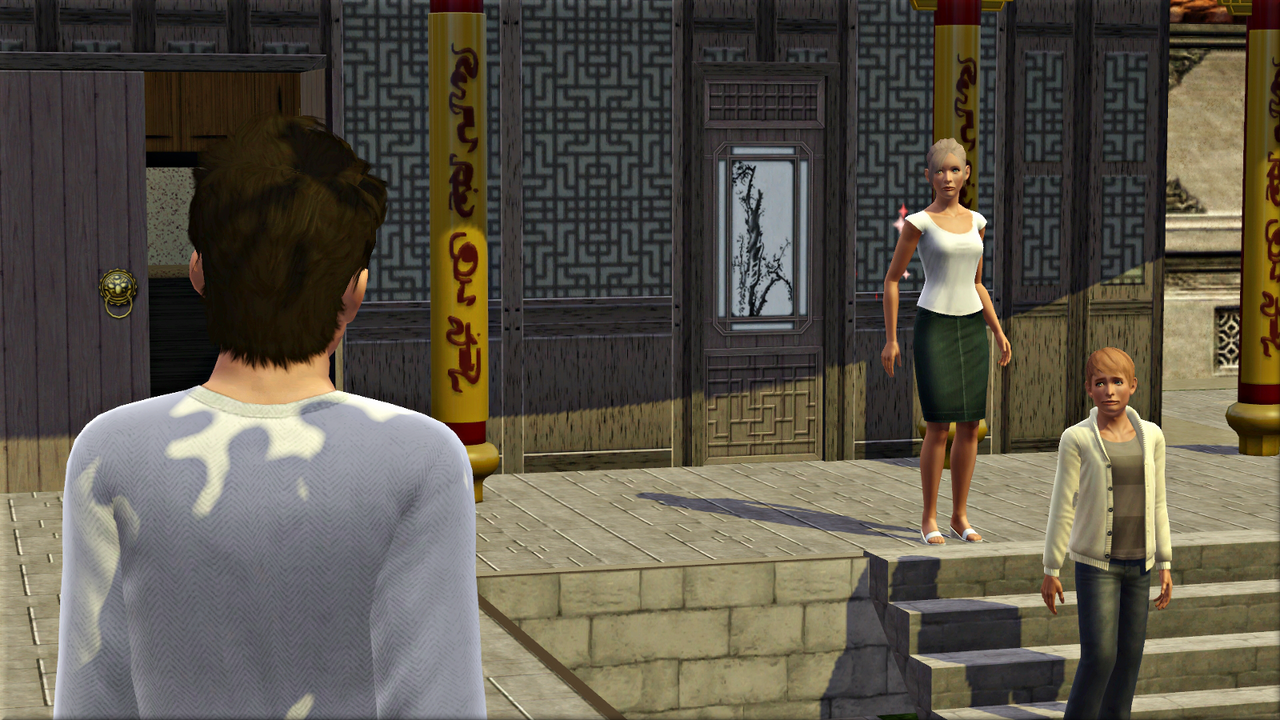 Thomas and Carter get along well. They’re both interested in martial arts, though Thomas isn’t skilled enough to spar yet. 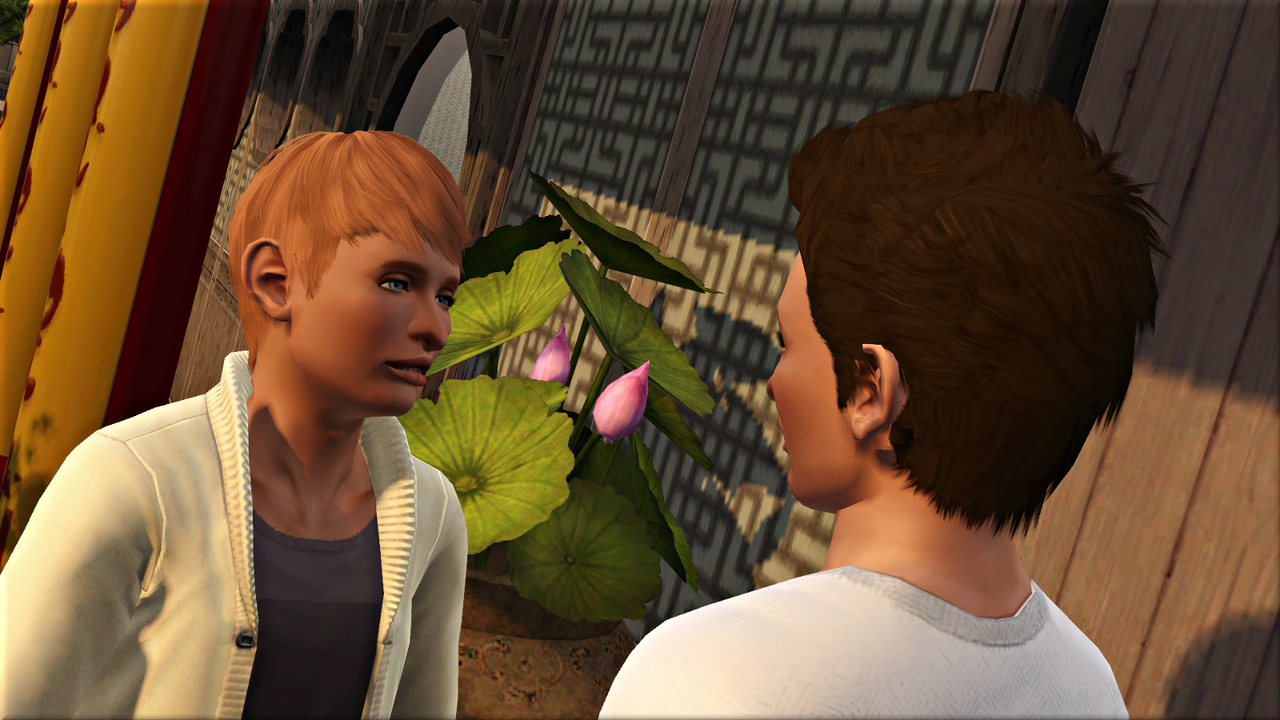 I was hoping that if Carter stuck around for a bit then Paula or Thomas would make some food for him, but no luck there. Fortunately I’d already placed plenty of places to eat throughout town, since we won’t be doing any cooking this generation. First up, I decided to call over Ho Sung and have Carter and him try out try out Jessabeans’ Dim Sum House, a wonderful makeover of an EA residential lot. 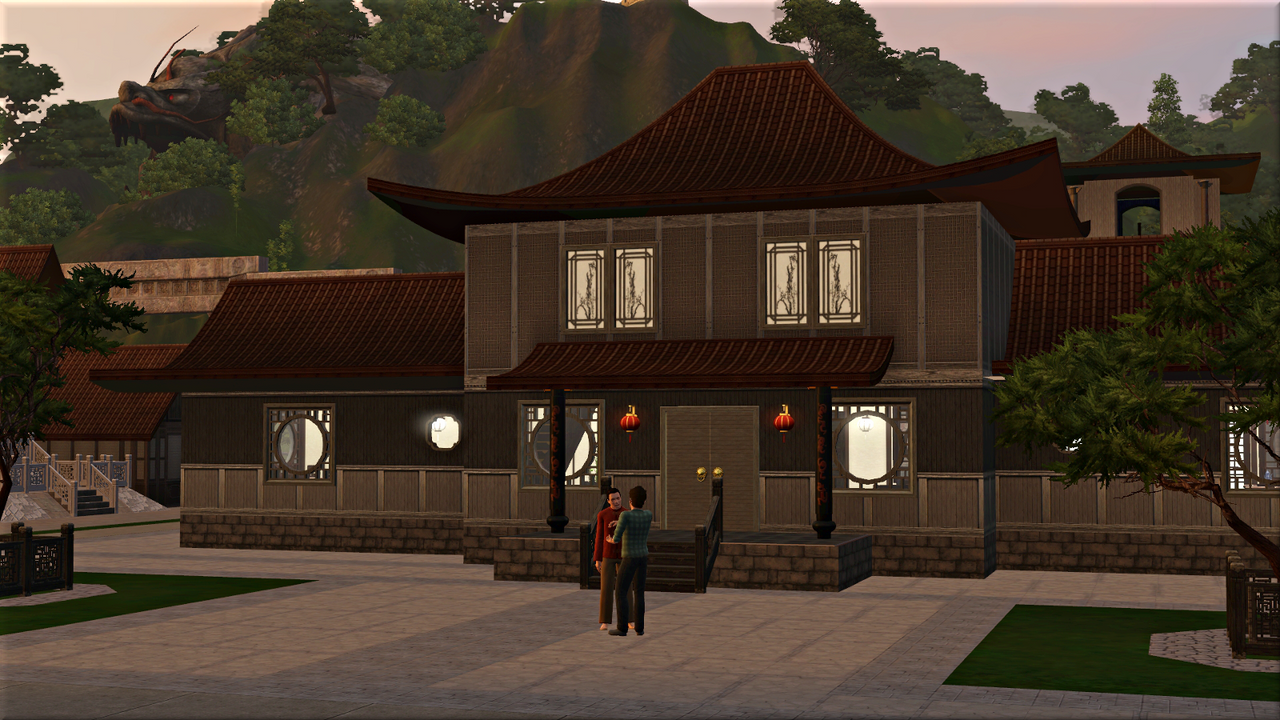 This place is beautiful! It’s so exciting checking out other builders’ lots in game. 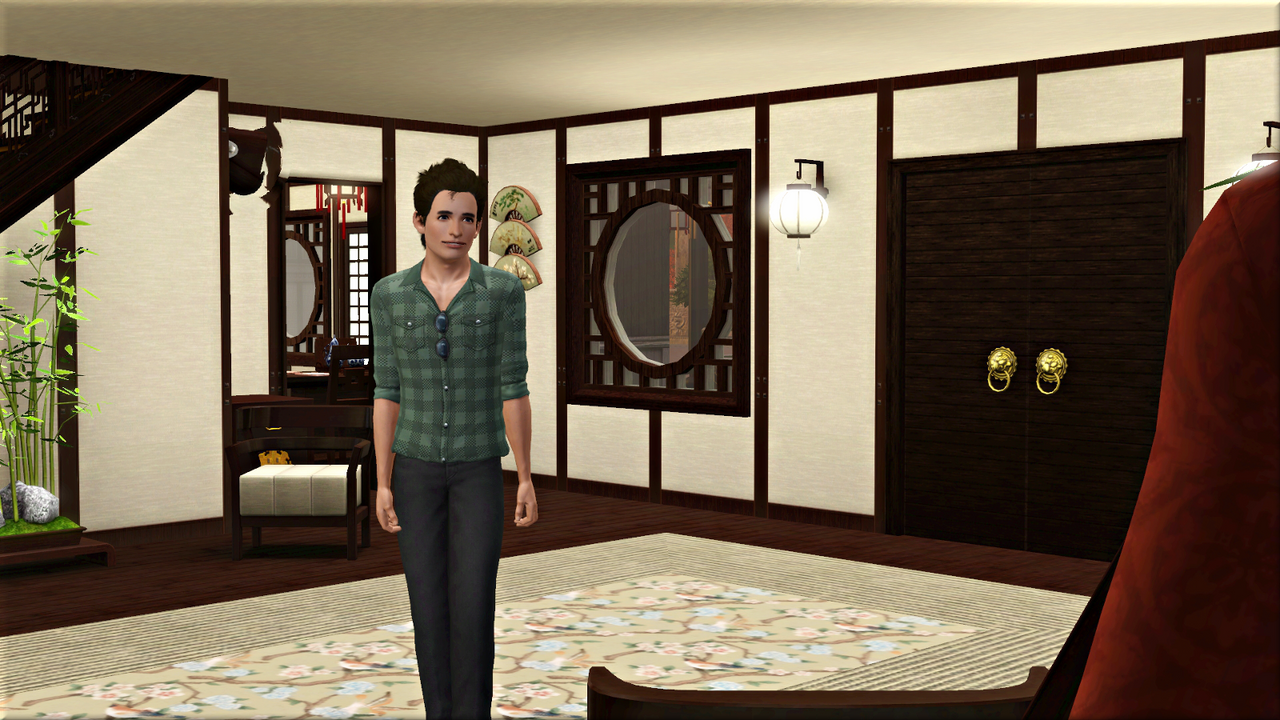 I had Carter and Ho Sung dine upstairs this time—closer to the free tasting nectar! 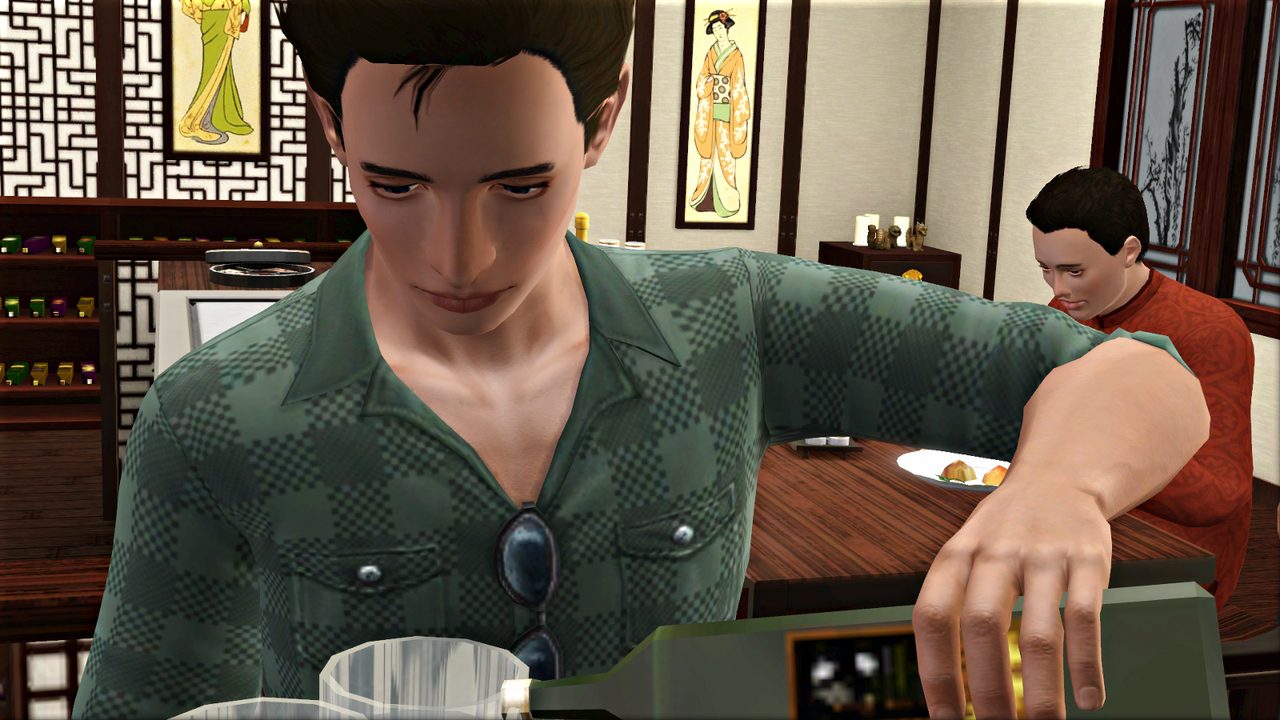 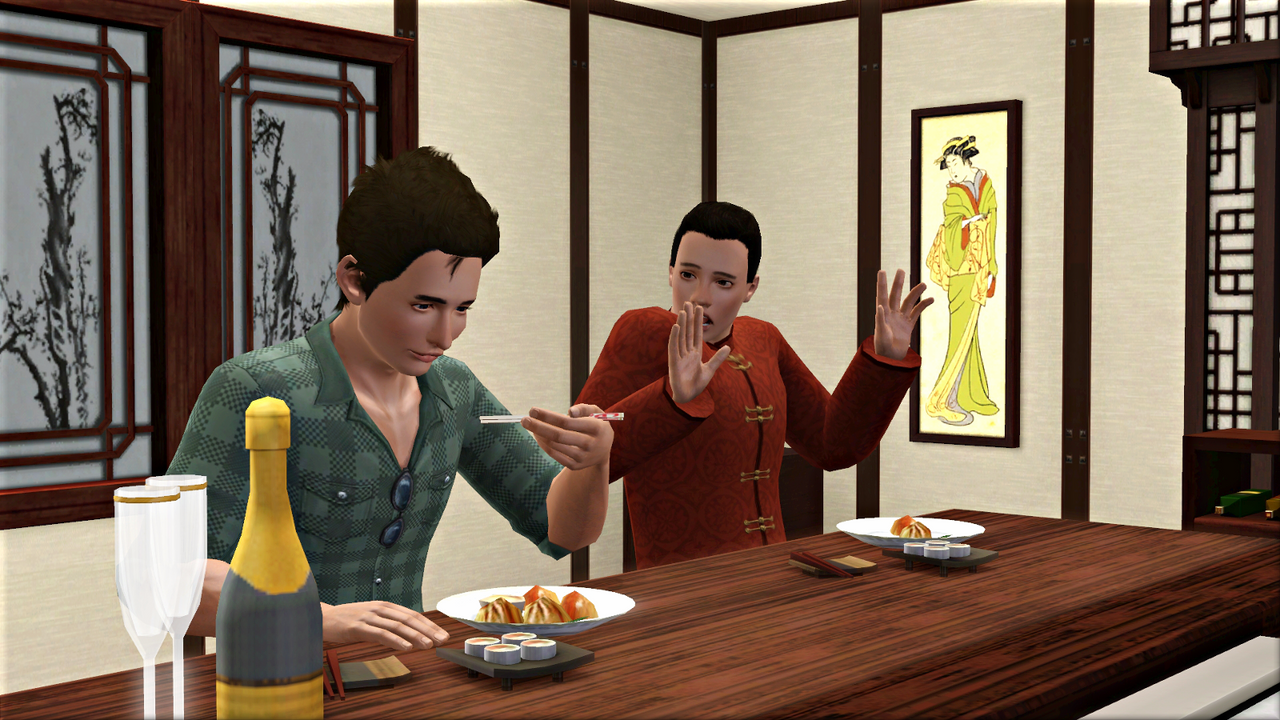 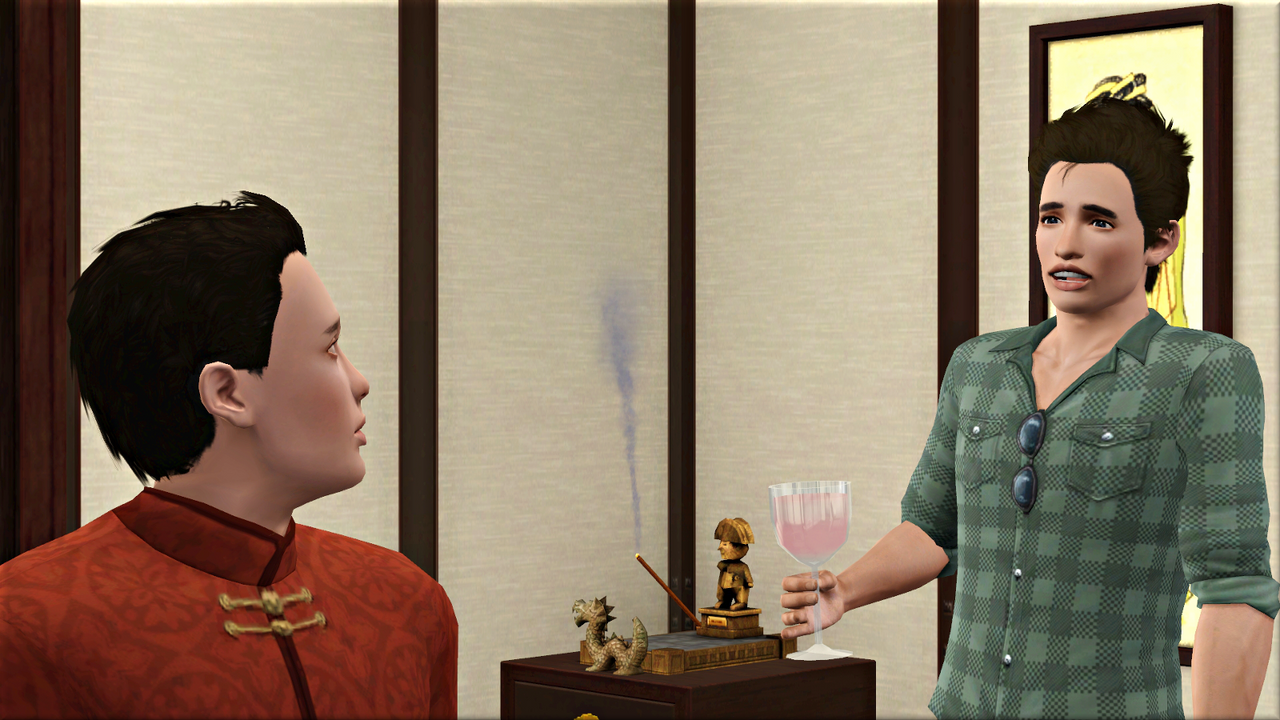 I noticed that Ho Sung’s special merchant assignation had been removed, and that Carter now had the option to spar with him, so I do think that they were related. Carter was just a bit too tired though, so I found a place for him to nap the rest of the night away. 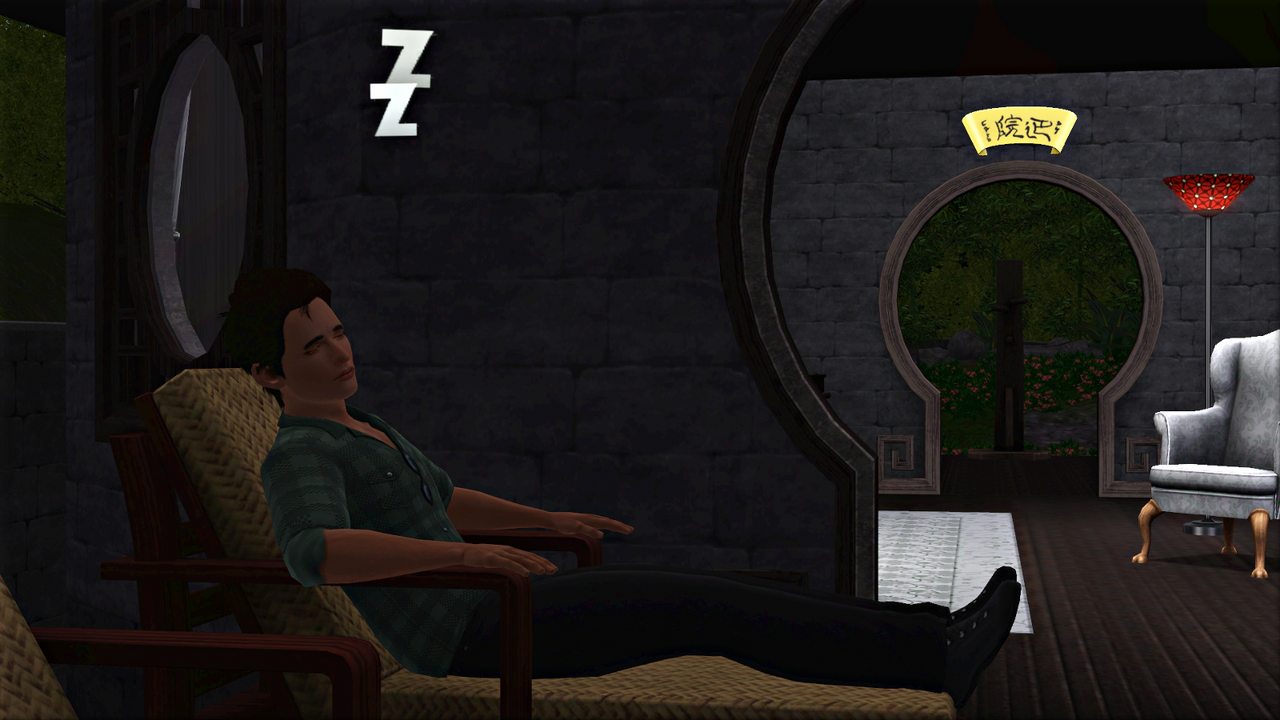