While Carter was working his way through the first couple of tournament ranks, he had rolled a wish to kiss someone for the first time, which makes sense, since he’s a family-orientated hopeless romantic.

With his friends Ho Sung and Jeramy, I sent him to a fusion lounge I’ve been building. Perhaps he might be able meet someone special there. 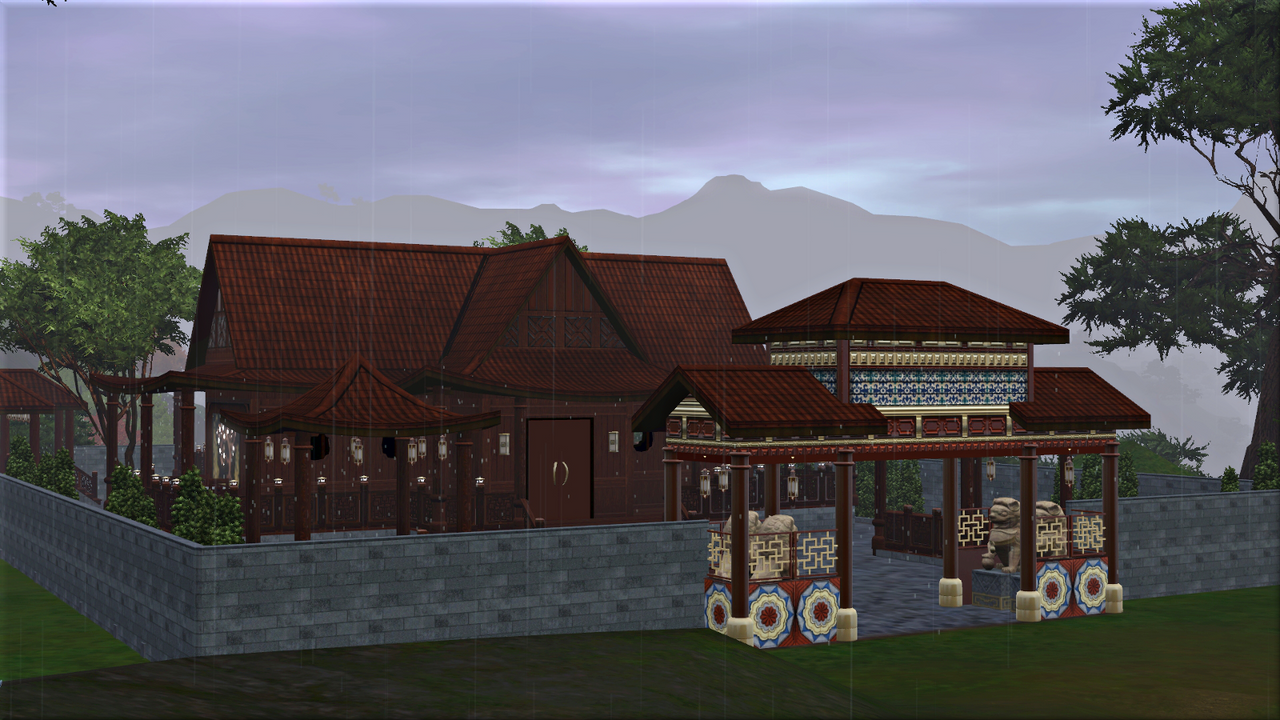 Jeramy had no trouble finding someone to flirt with. 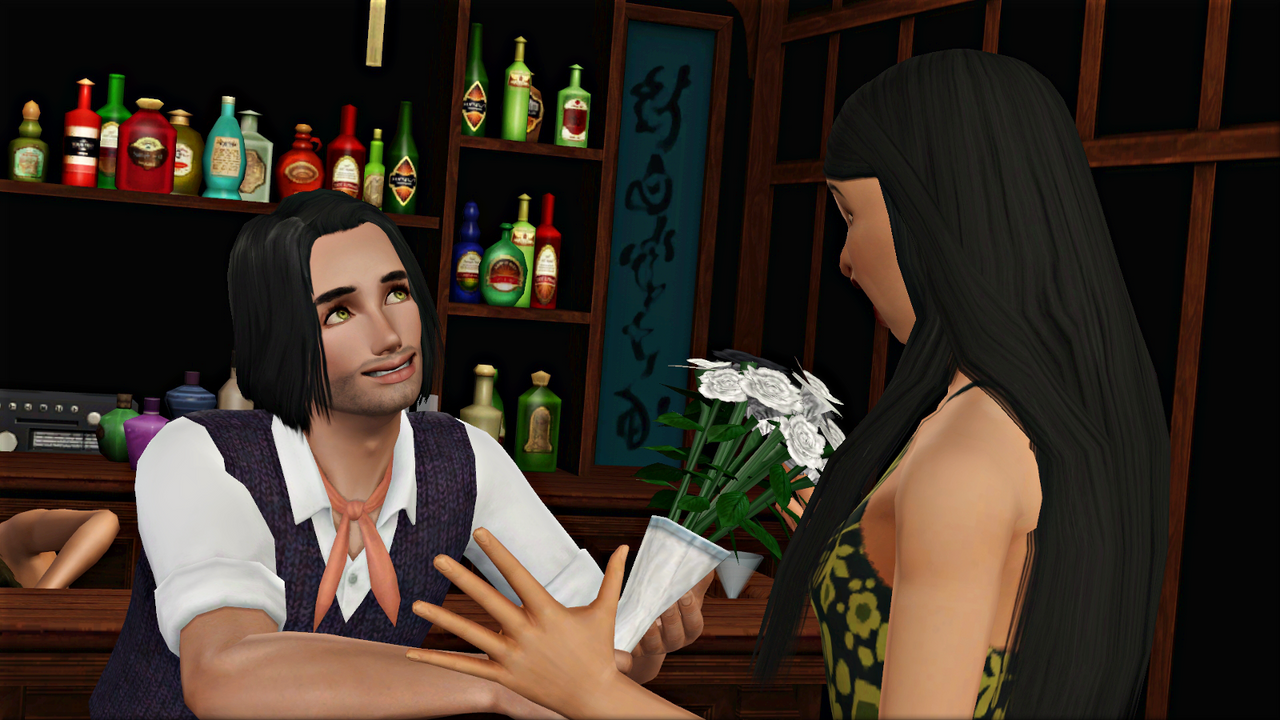 No one really caught Carter’s eye, but he still had a good time getting to know new sims and dancing with his friends. 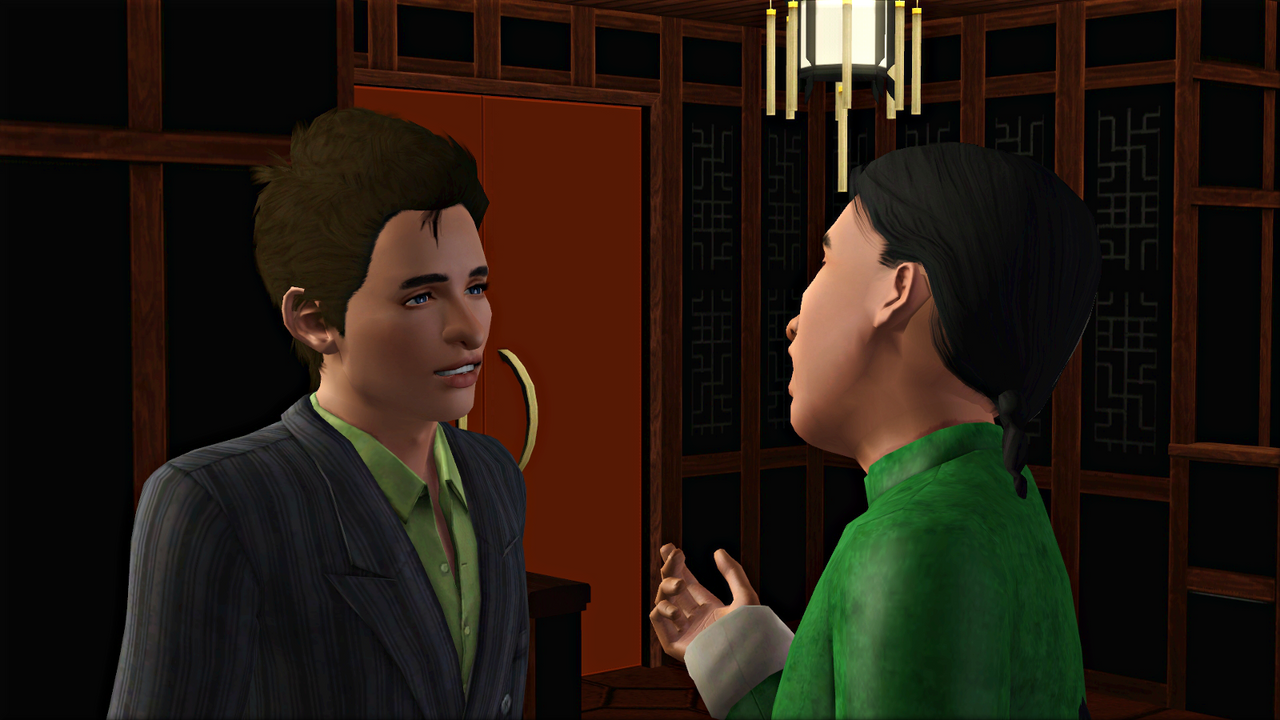 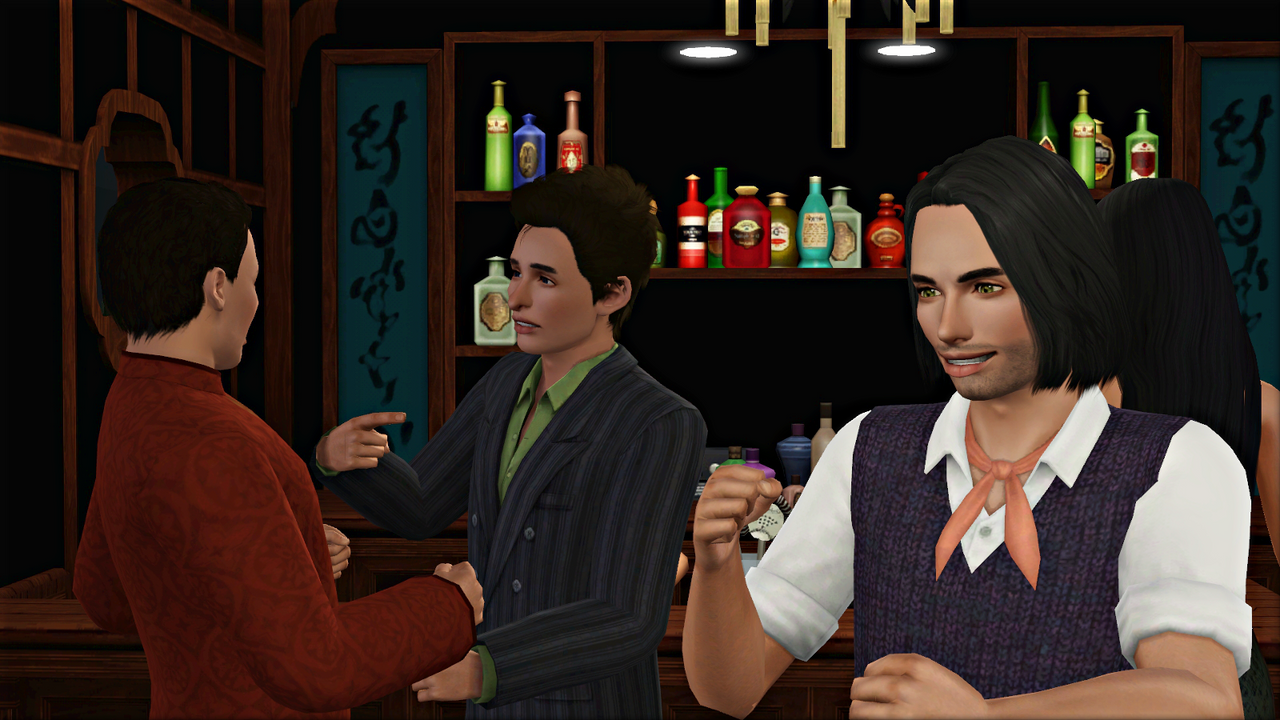 Ho Sung taught him a Chinese song, ‘Ping and His Checkers’. 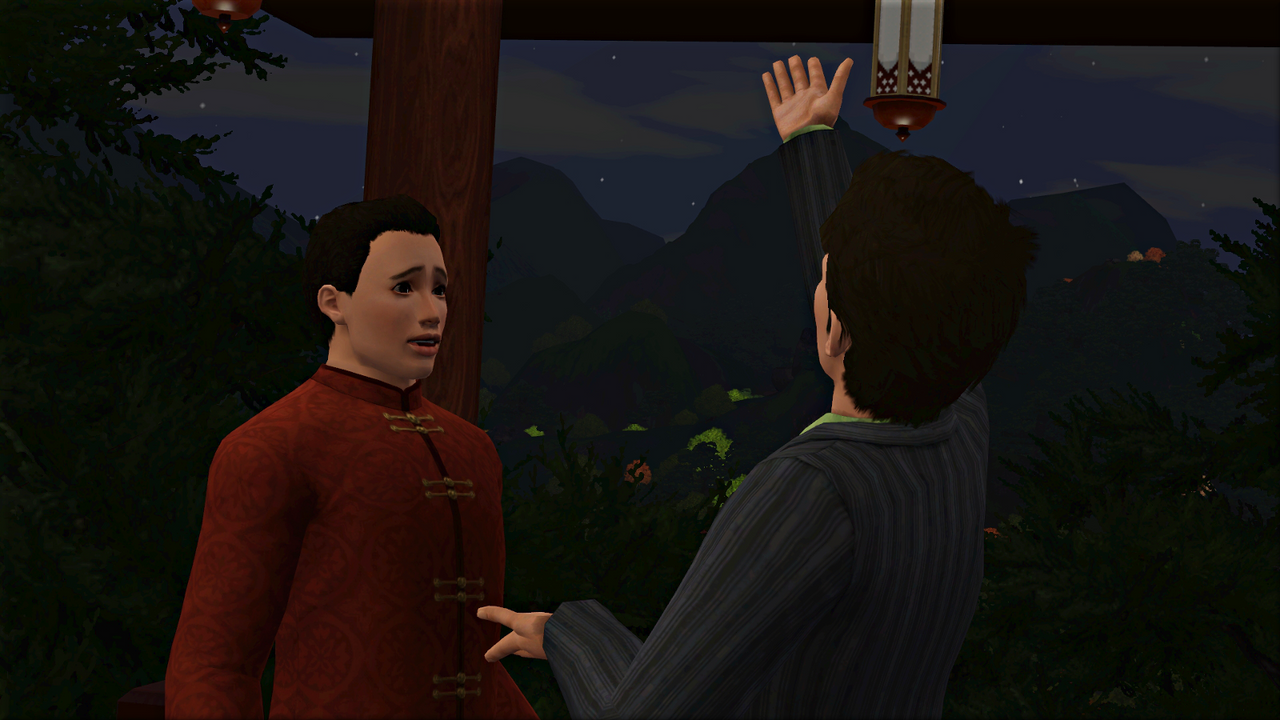 He also learned the recipes for Sakura Shoji Sweetness (a party drink) and Zen Zinger (an energy drink). 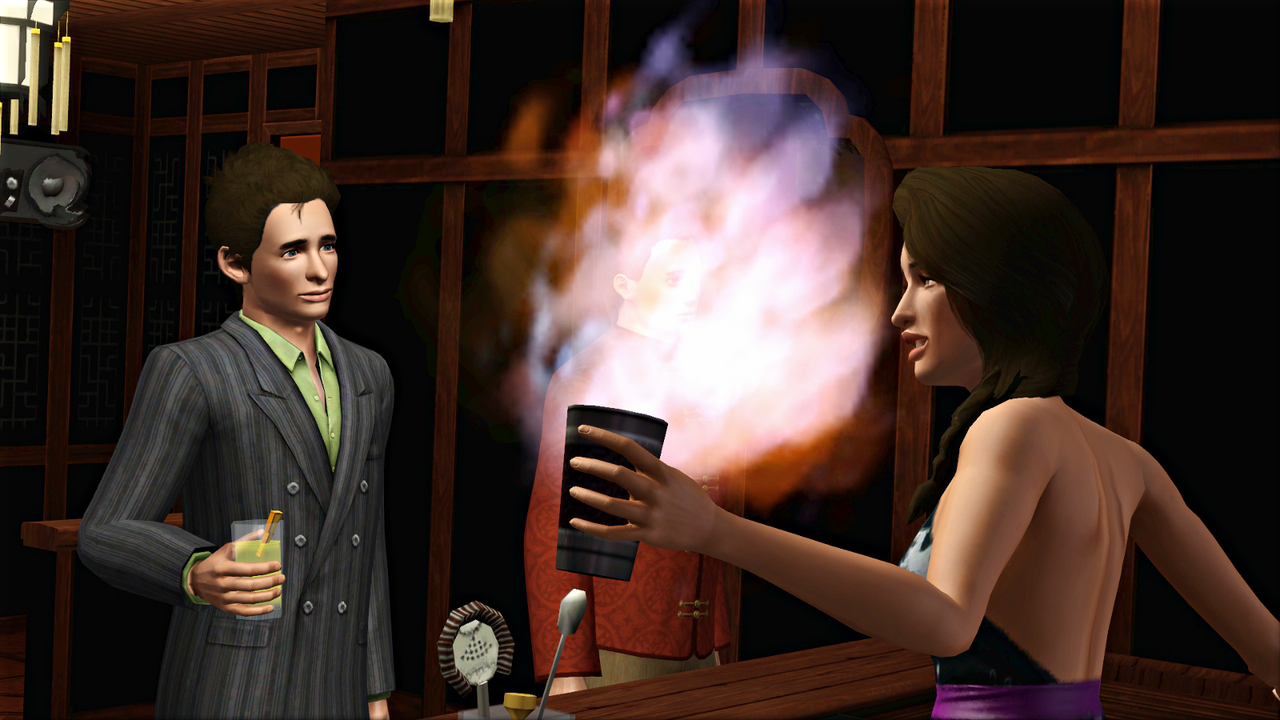 Shang Simla is not the right place to try to master all the drinks, and besides I’ve already done that in my EP Legacy, but these will bring just a bit more variety to Carter’s repertoire.

Since Carter now has his camera back, I decided to spend the following morning working on a few of the photo collections. I’m not even going to try to complete any of them; to me, they’re just a rough guide for bringing in the simoleons.

He still had quite a few left to capture in the ‘Plants and Flowers’ category, so I sent him to Han’s Orchanrd, where he was able to check off ‘Bell Pepper Plant’, ‘Garlic Plant’, and ‘Potato Vine’. 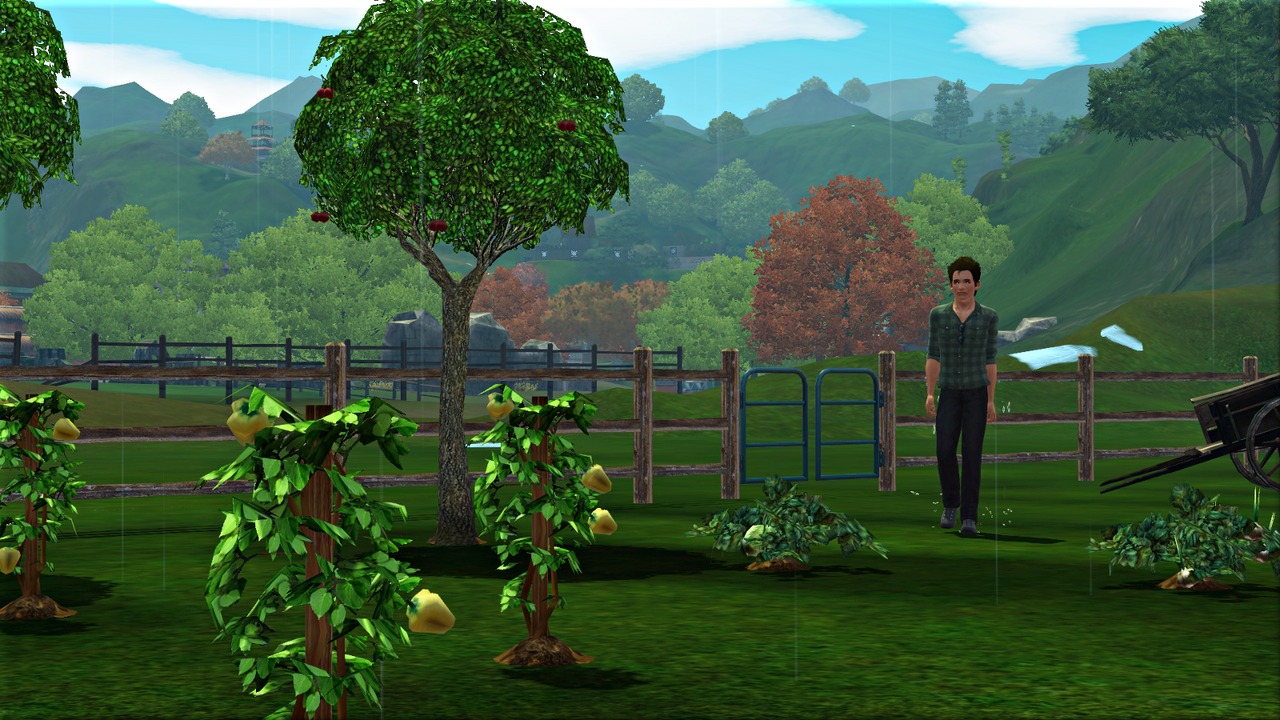 Next, he got shots of the Scholar’s Garden and Academy. Carter completed the ‘Architectural Eye’ back in Riverview, the boost from that bringing their value up to over 1,000 simoleons each. 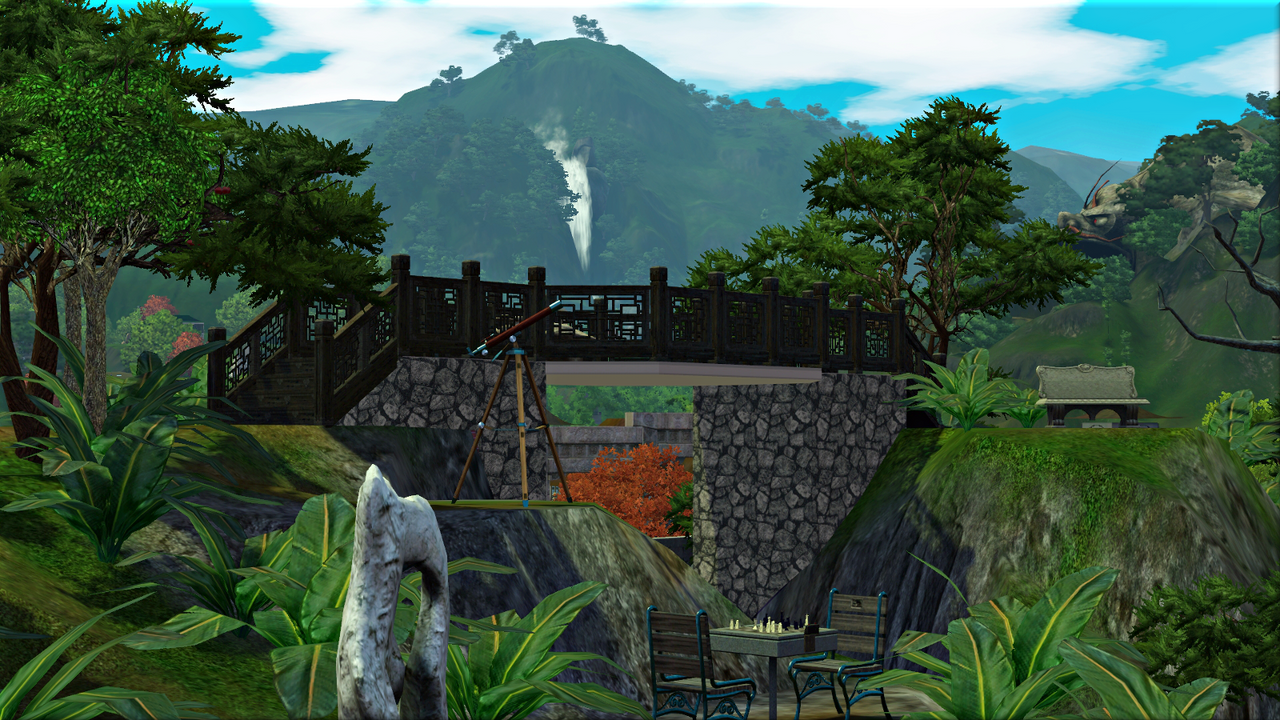 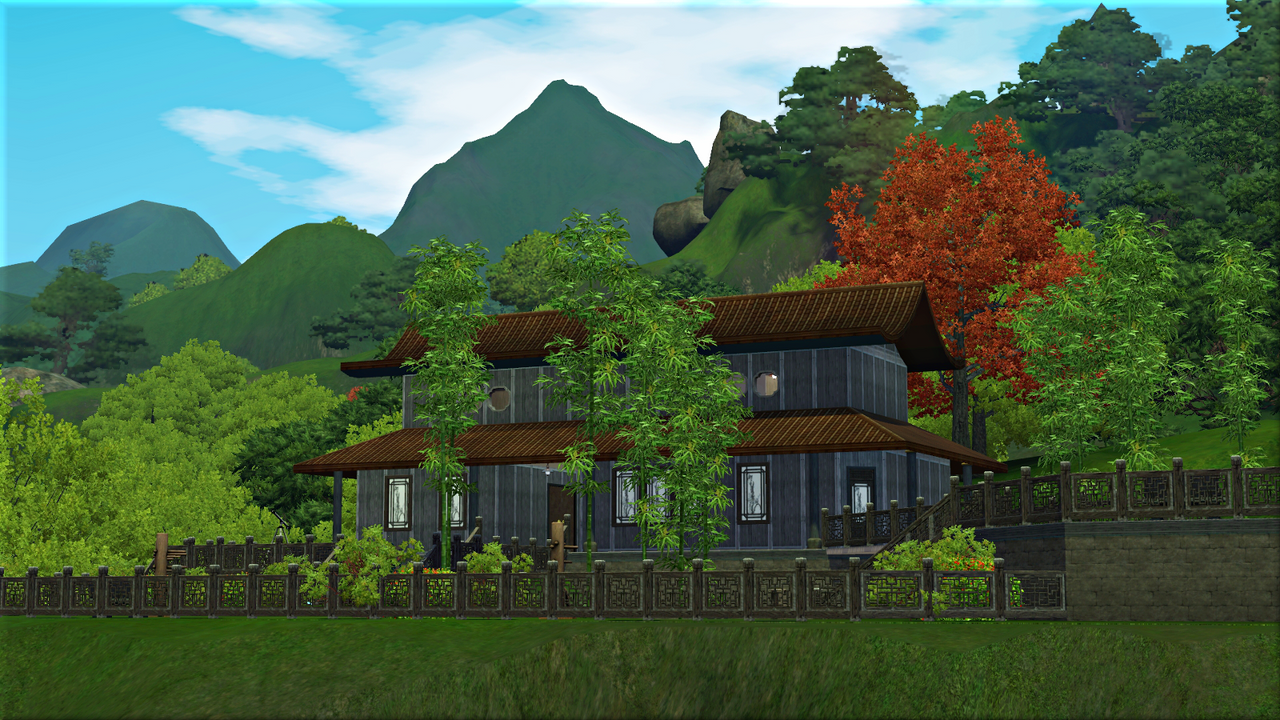 While he was taking the one of the Academy, I noticed he could also get ‘Board Breaker’ and ‘Honing Body and Mind’ from ‘Sims in Motion’. 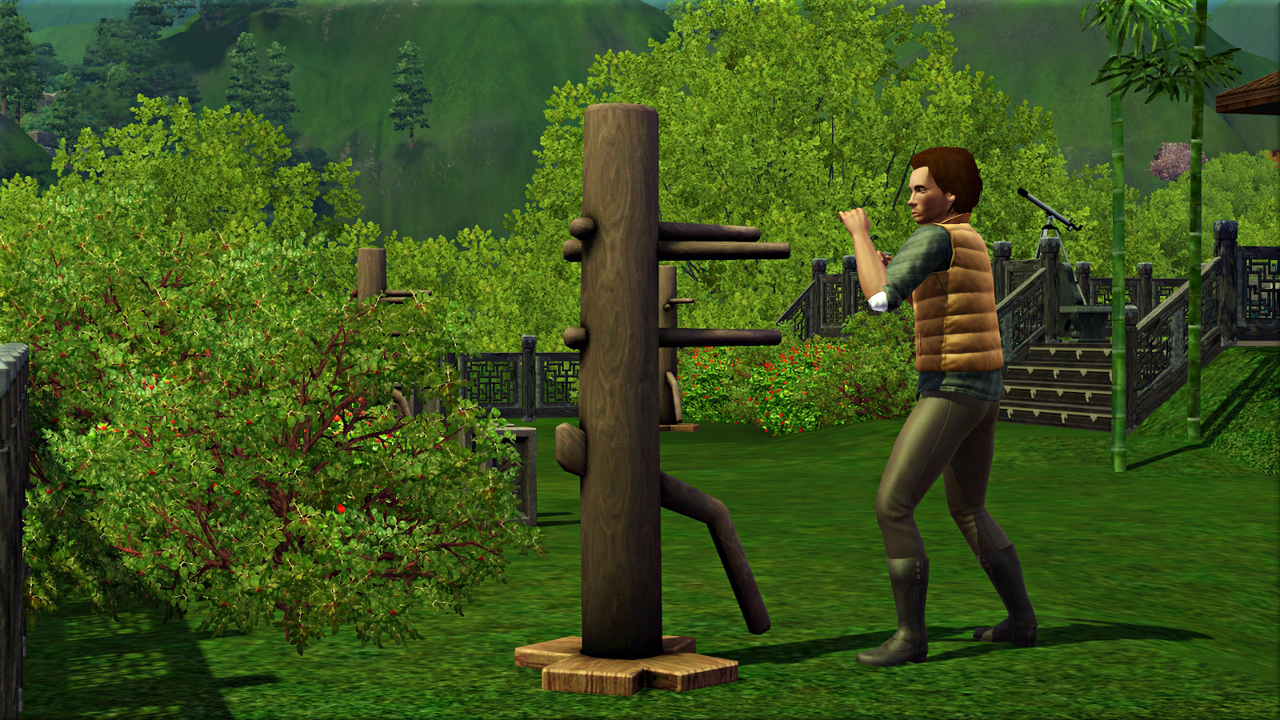 That was enough photographs for one day, I figured. I’d consign them all first thing the next morning. In the mean time, Carter continued with his tournament matches. He’s got some pretty cool moves now! 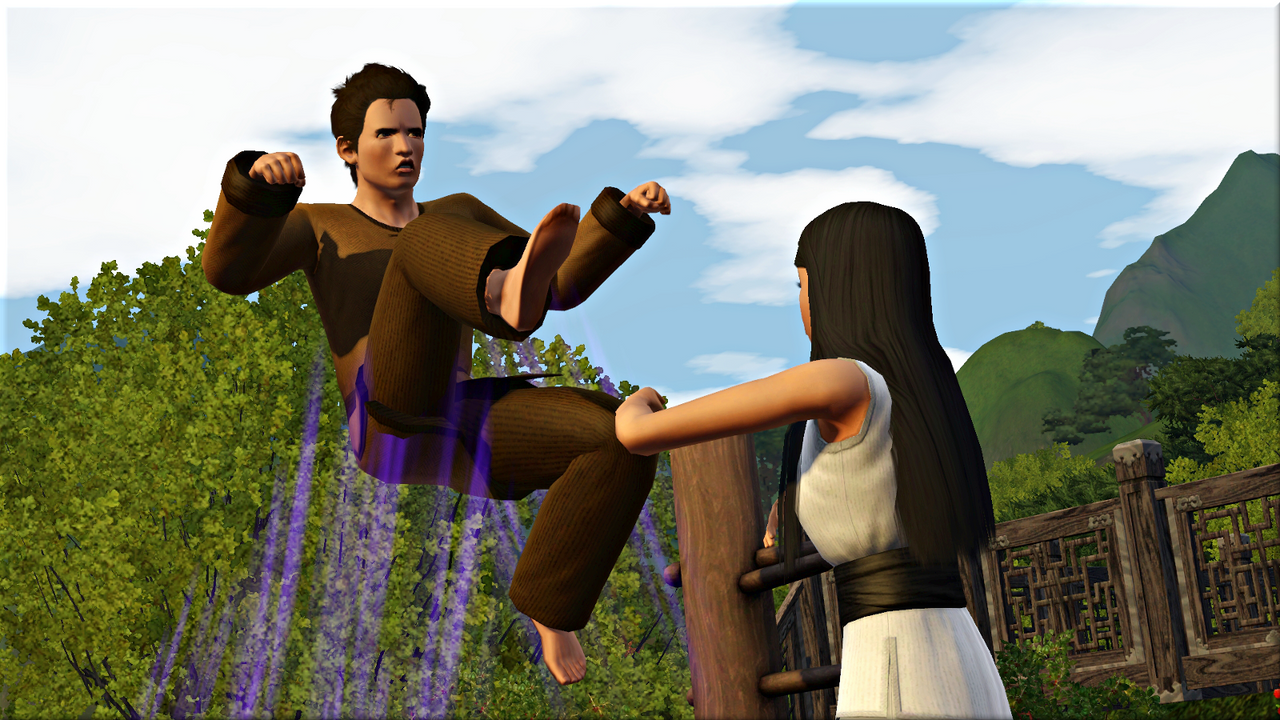 So did his opponent, Maya Wang. 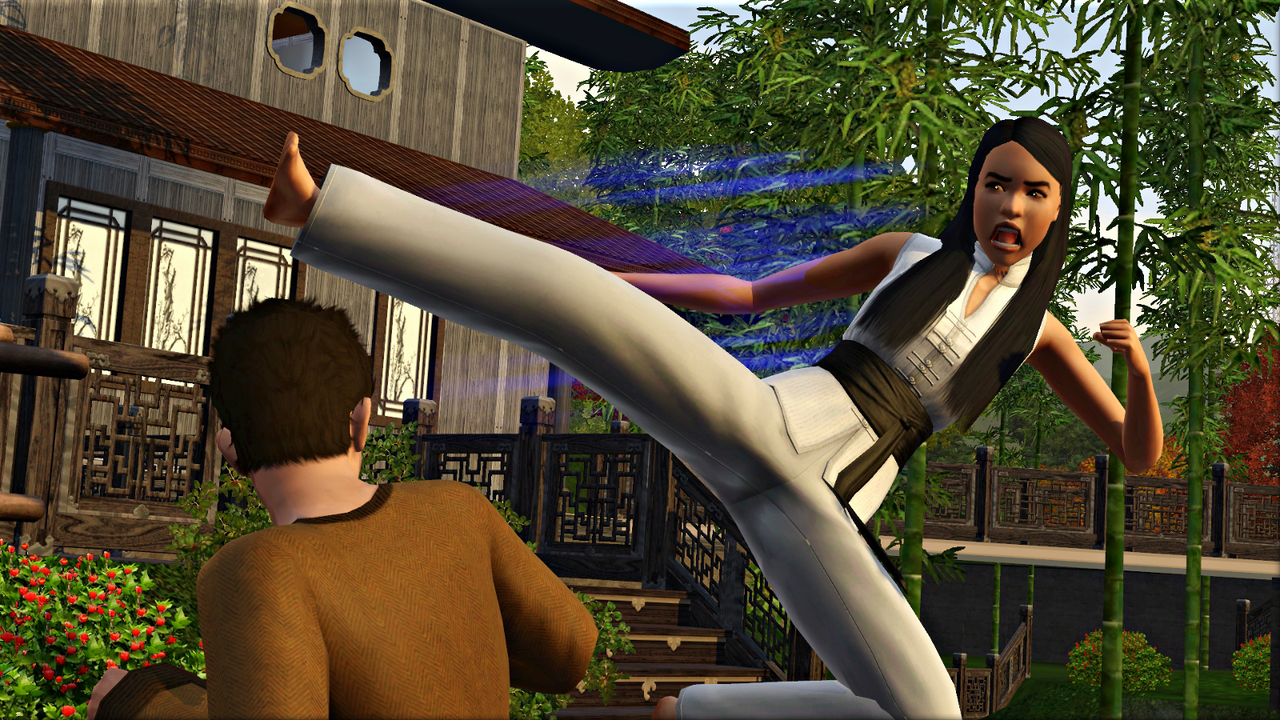 Maya’s a black belt—a level 9—but Carter was able to defeat her 2-0. 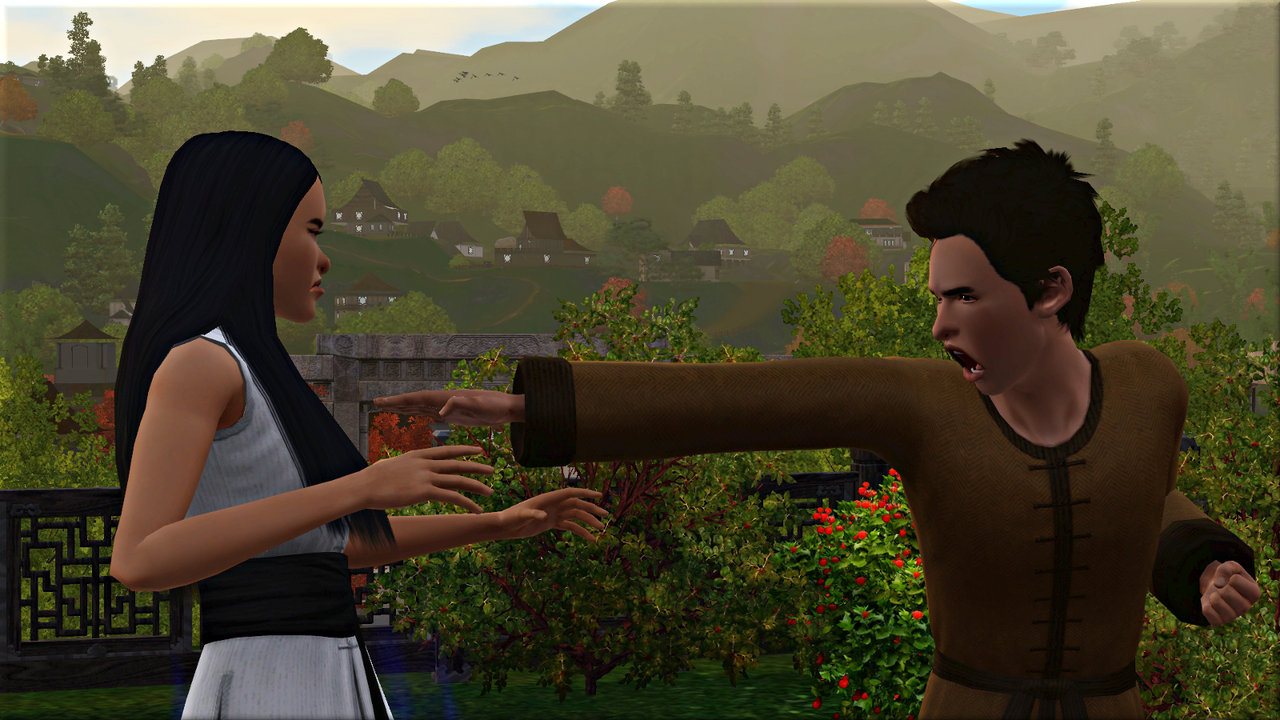 I had him sleep outside the consignment store that night, all set for an early start. 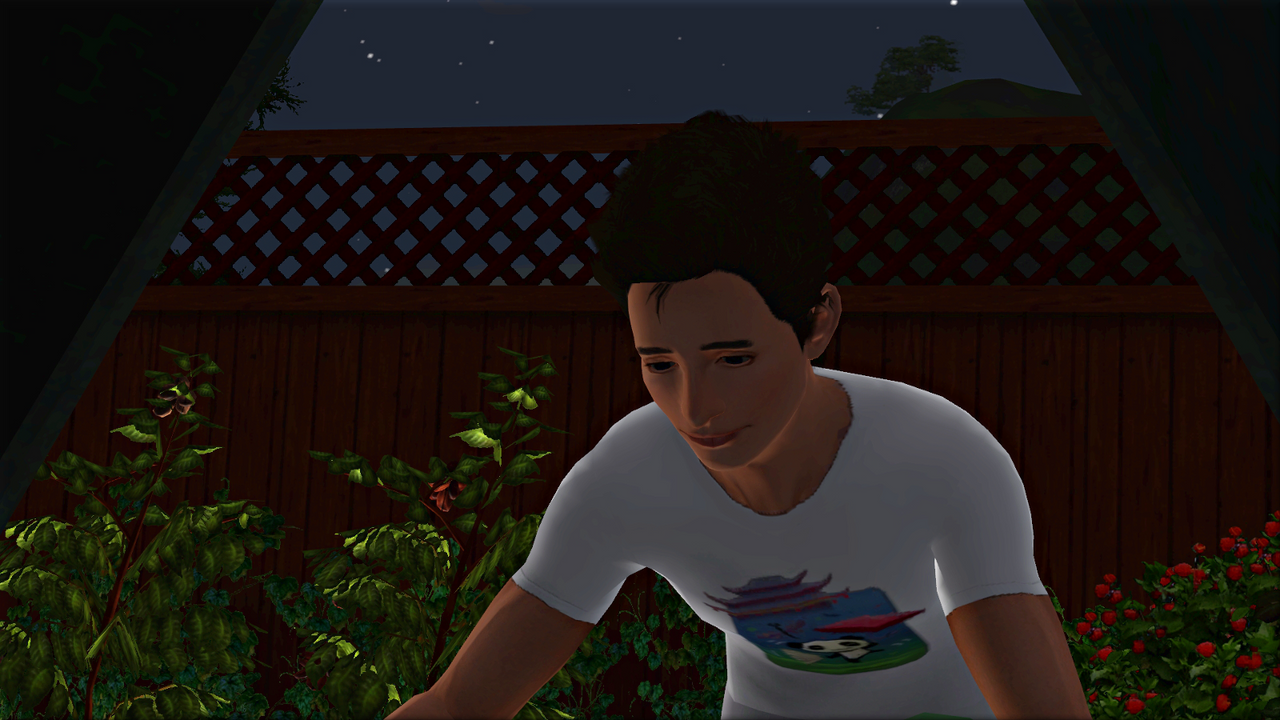 He began his day with a plate of fried shrimp. Then, at 9am, he was able to consign his photographs in the art shop. (If you’re interested in this lot, it’s a row of commercial units I recently uploaded.) 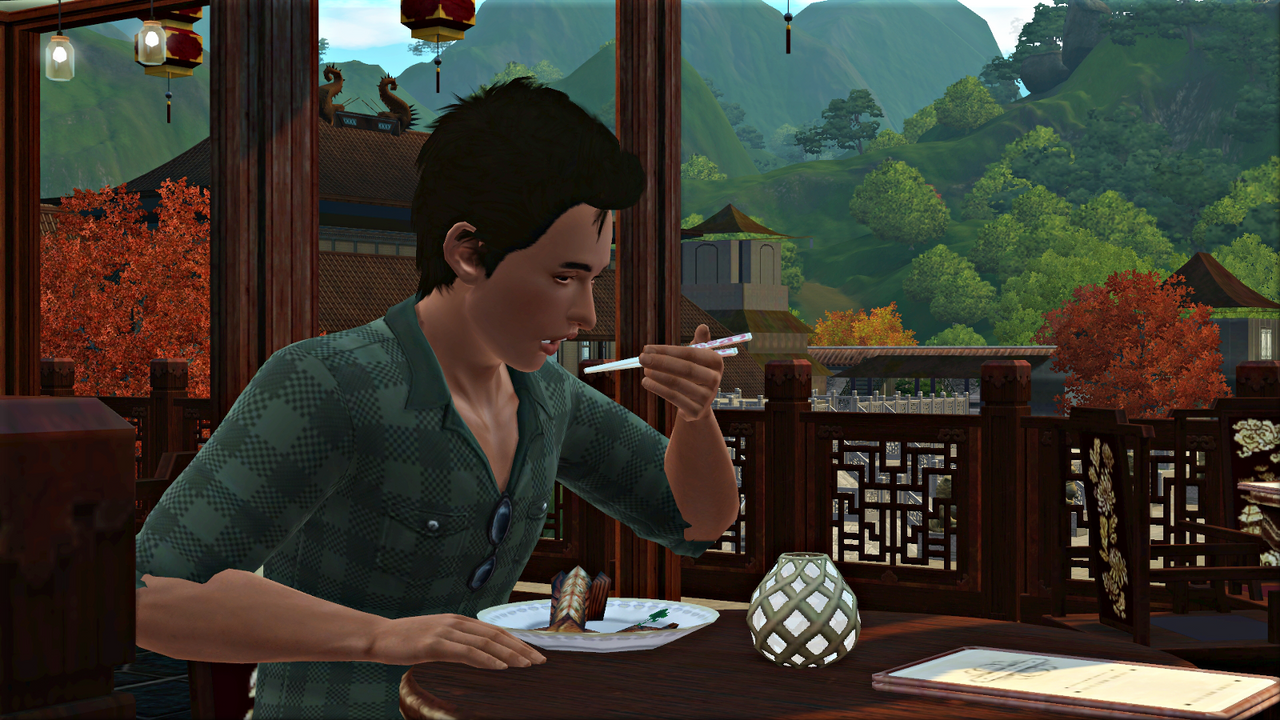 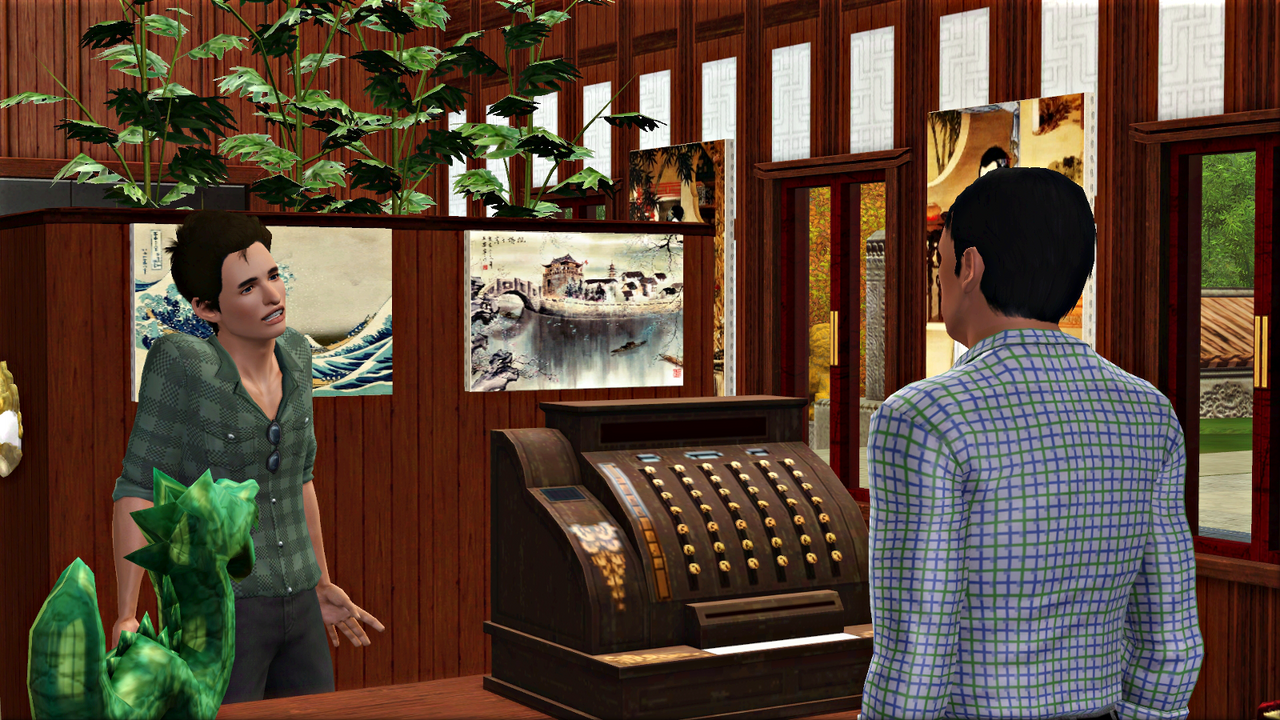 I wanted to see how easily they would sell before taking any more, so I had Carter spend the rest of that day just fighting matches. He was breezing through them until fellow brown belt Shen Su proved too tough for him. 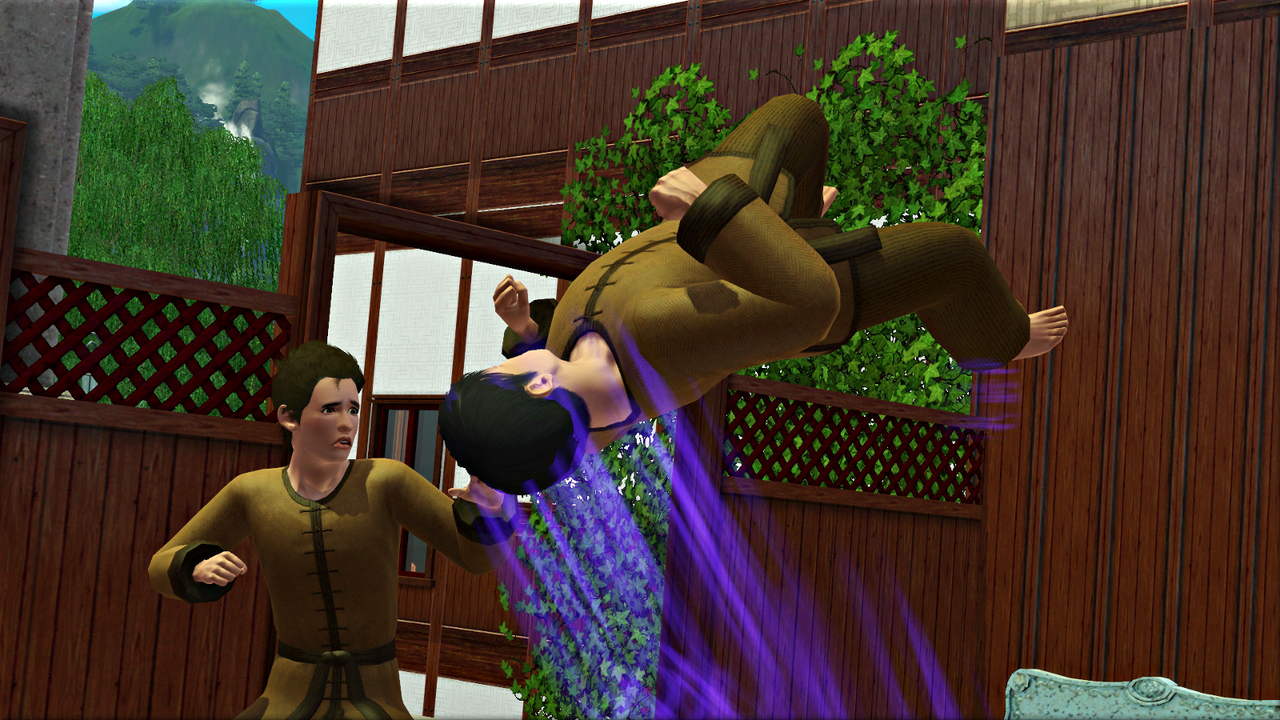 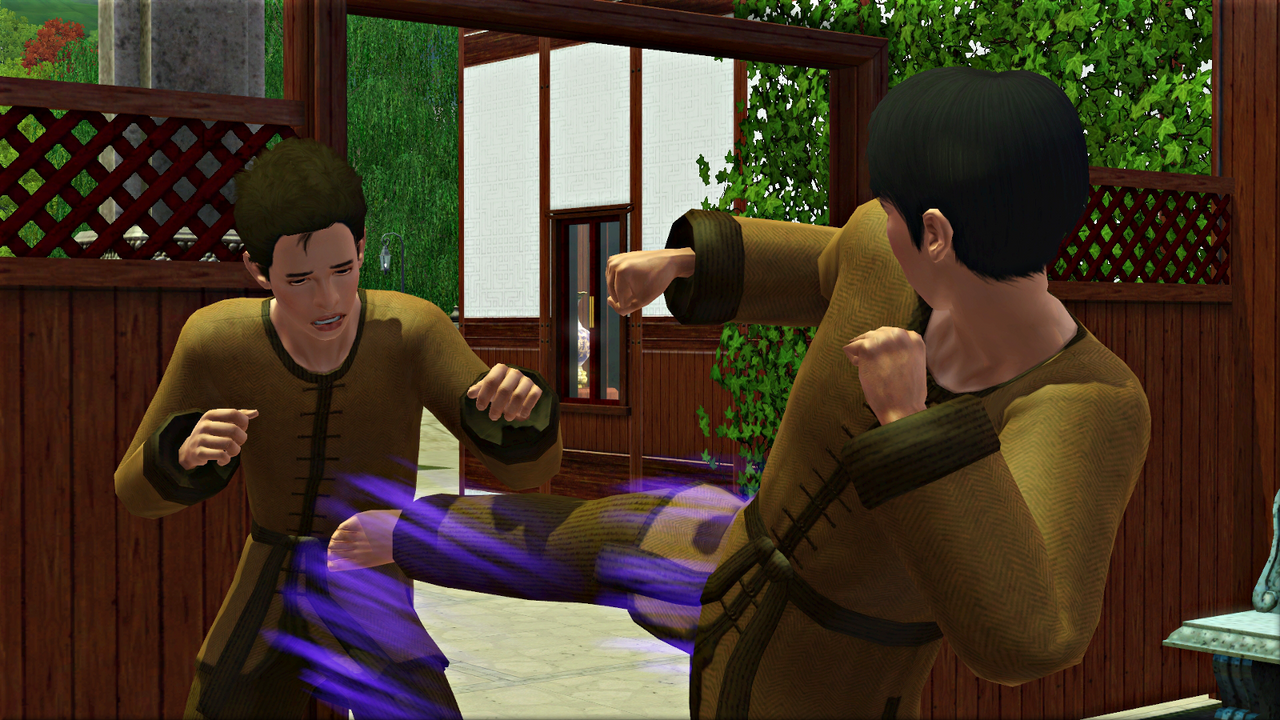 Eventually, though, even Shen was defeated. Carter bought him dinner to thank him for the challenging matches. 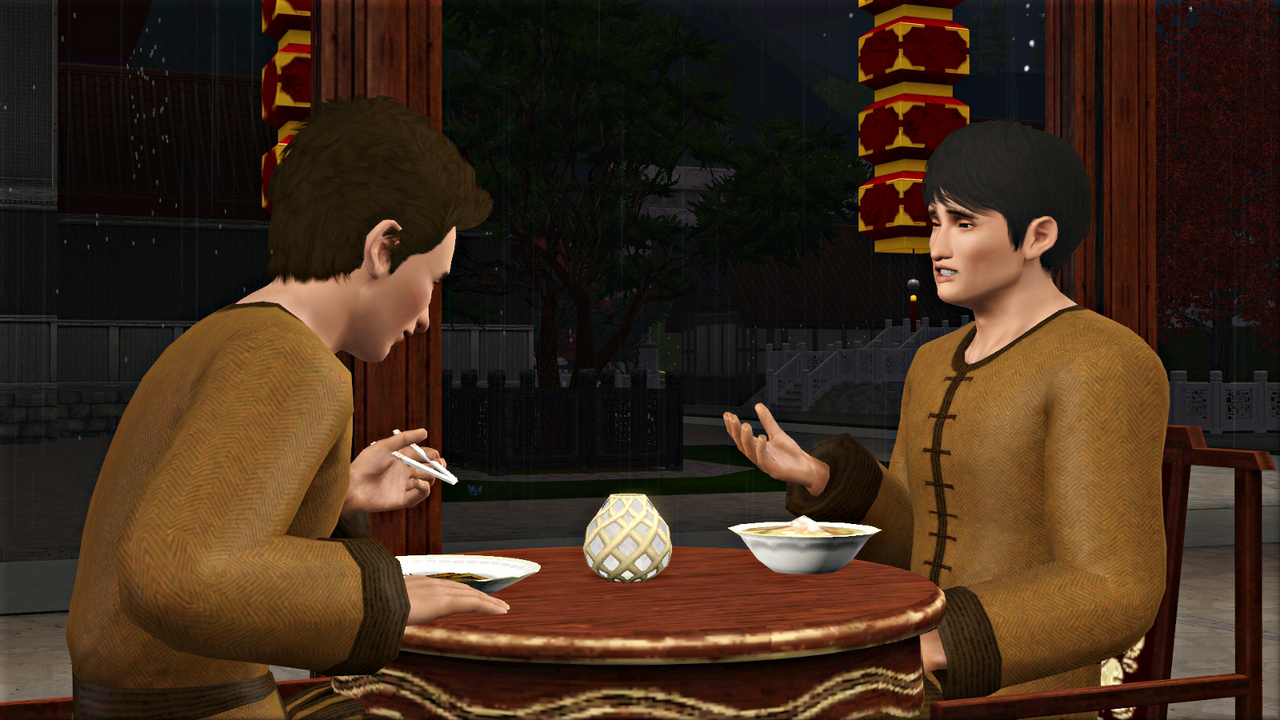 All but  a couple of Carter’s photos had sold, bringing in about 5,000 simoleons. The next day, I sent him to the Dragon Cave to tackle the the ‘travel’ category. 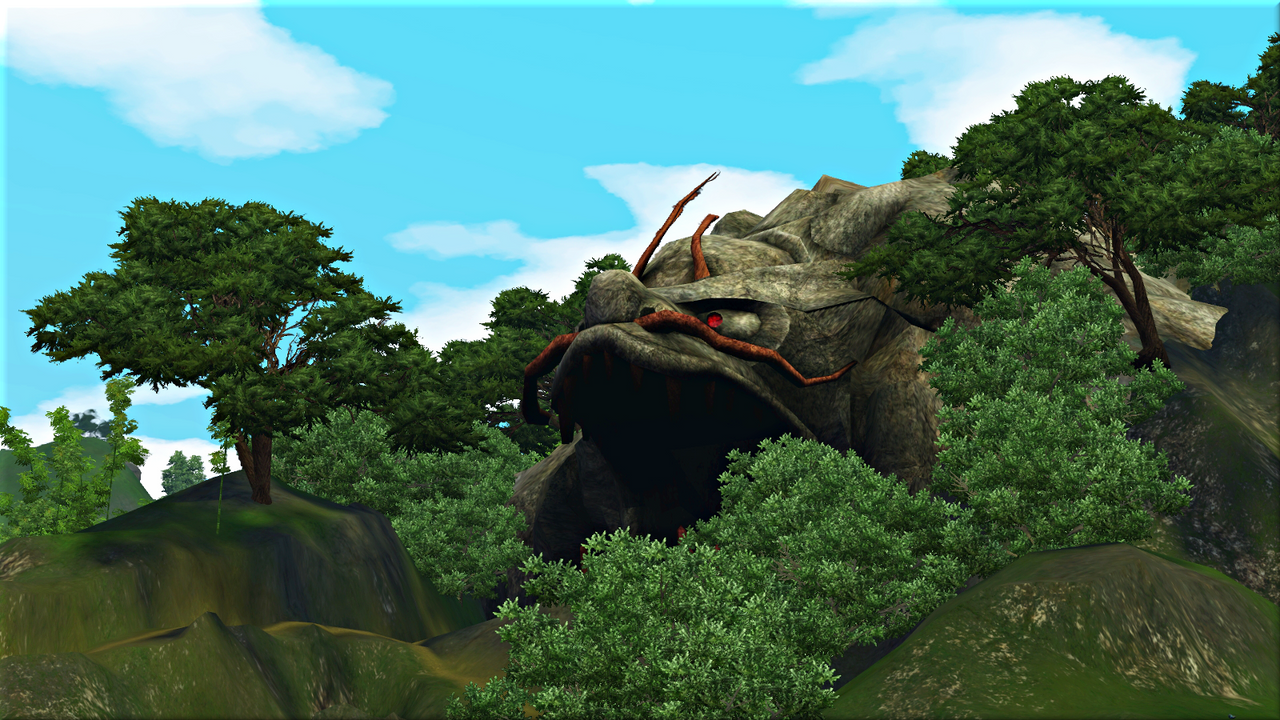 Inside the tomb, treasure lay strewn about everywhere, but Carter left it all alone. He was here to document, not to loot. (If you want to see what The Temple of the Dragon looks like solved, check out the layouts linked in Part 1.6 of EP Legacy.) 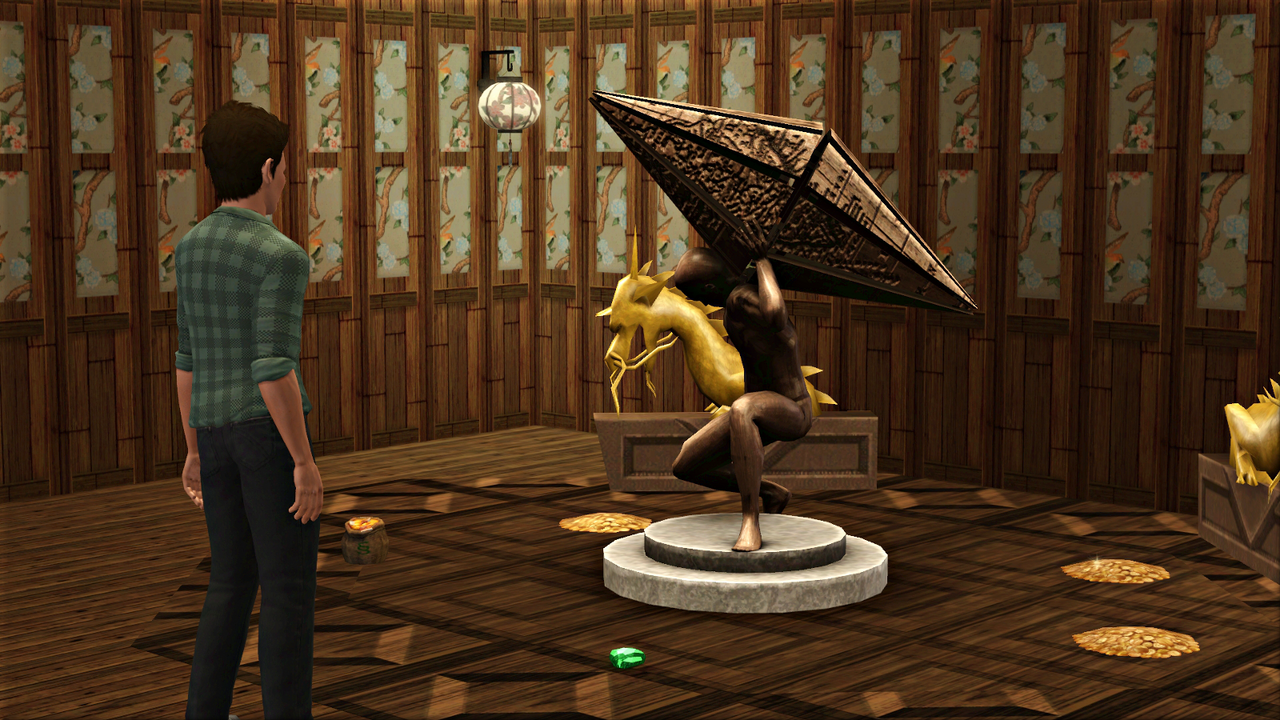 The pictures were  a mixed bag. They were all under 1,000, apart from the one of the Dragon Cave itself, which was worth almost 5,000 for a large portrait. Stupid—I should have got a panoramic one. I’ll be able to in the future of course, but never again with the first-time-capture multiplier. Carter consigned them all the following morning.

While he was in the Dragon Cave, I’d received a notification that Thomas had aged up. When I checked the family tree, I saw that Aunt Paula had too. I had Carter buy a shower-in-a-can as a birthday present for Thomas. It was a bit of a weird gift, but Thomas is disciplined and athletic so I figured he might have some use for it. 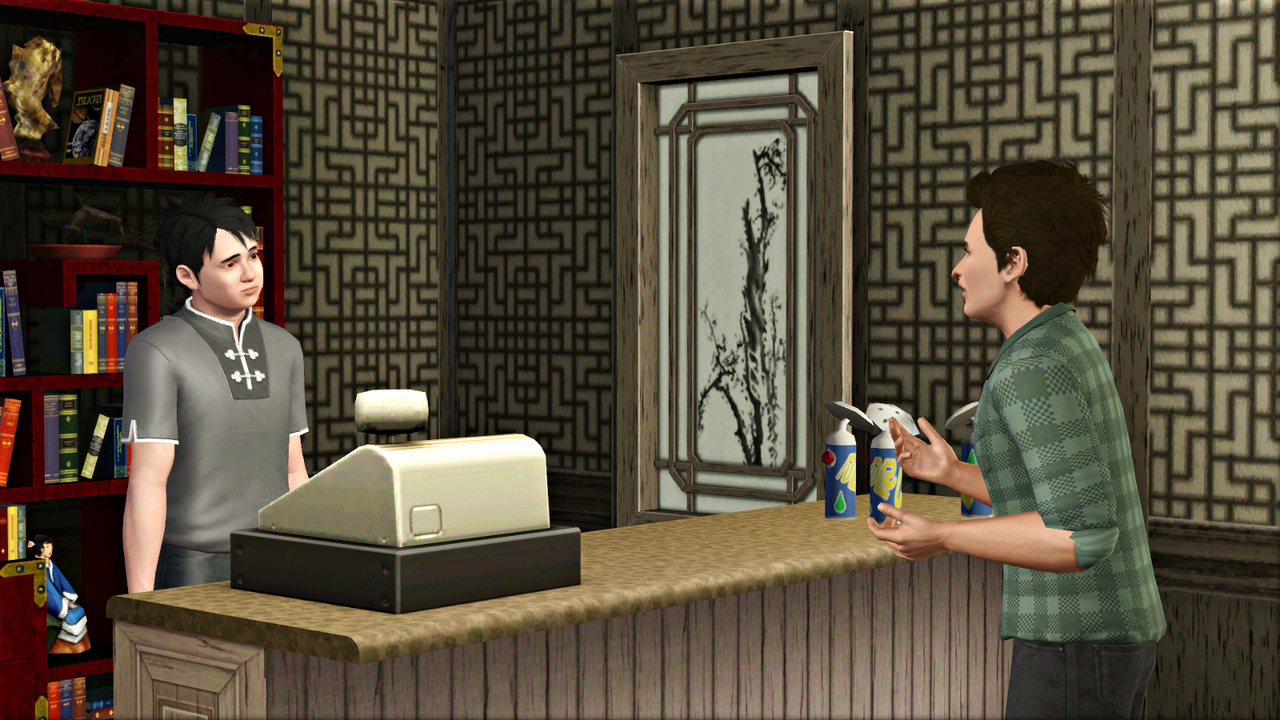 Paula was difficult to find something for. She’s frugal and a snob, which is a weird combination. I guess she wants nice things at a discount…but does she also want other people to be frugal, or just to save money herself? I wish you could buy gift vouchers for other sims. In the end I settled on a vase from the relics store.

I’d take the gifts round that evening. First, some more tournament matches. 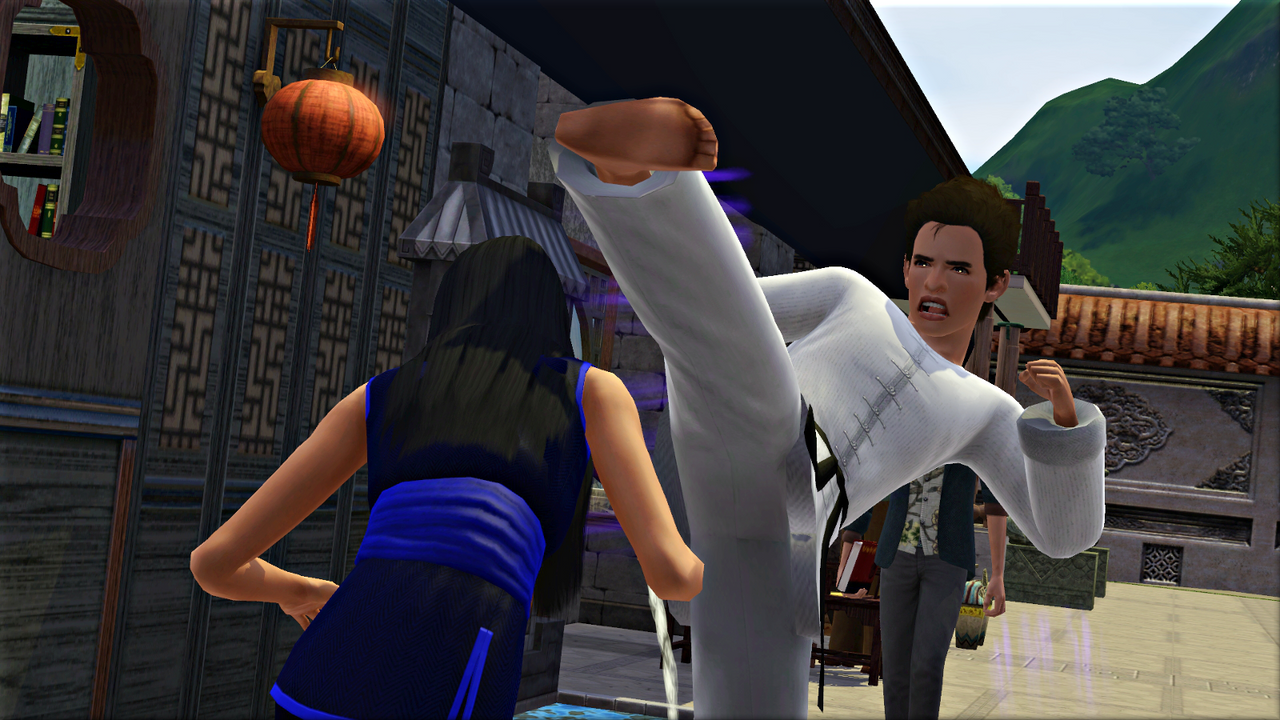 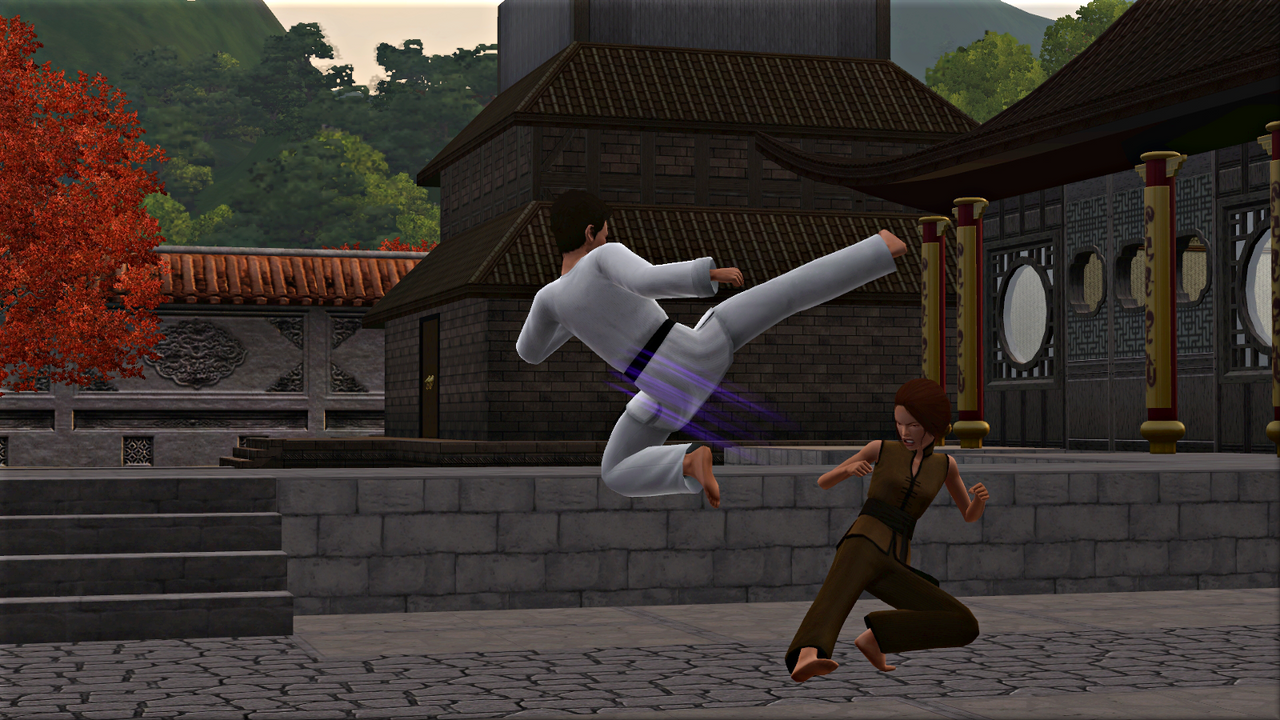 Some more photos sold at end of business day—not the Dragon Cave one, but enough enough of the others to add up to about 5,000 again.

Thomas loved his birthday present. Aunt Paula, however, was unimpressed. 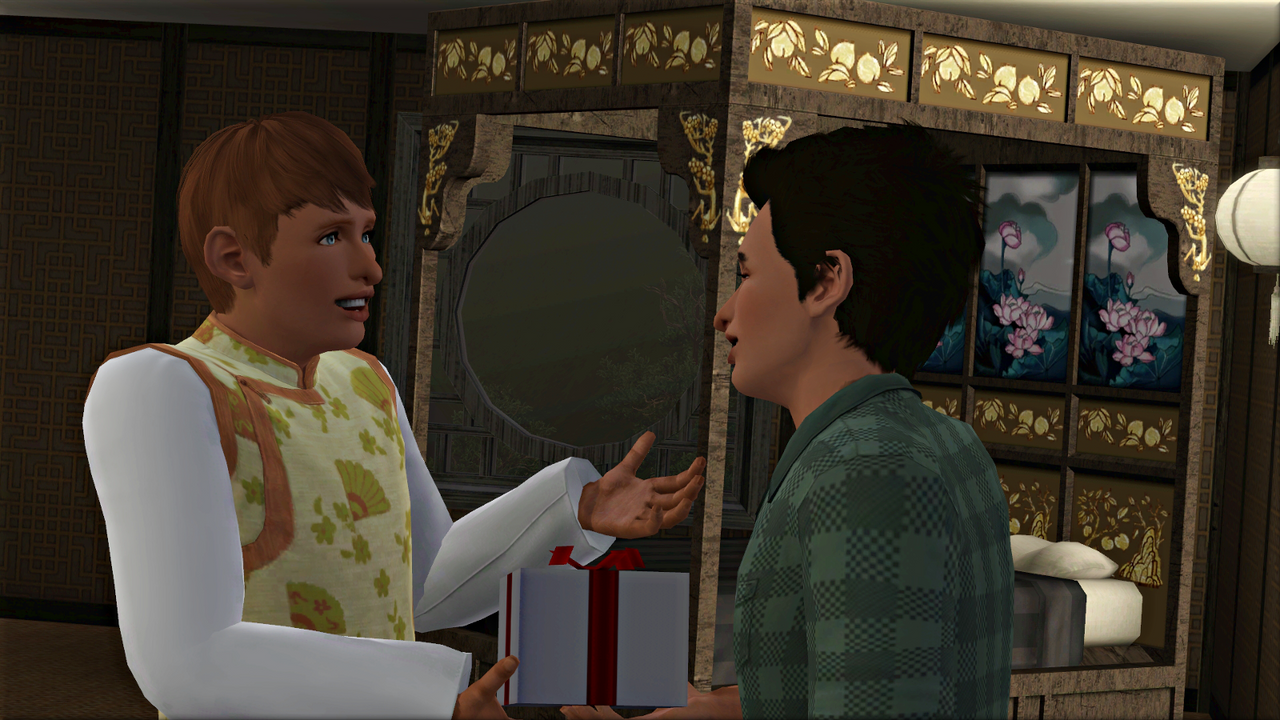 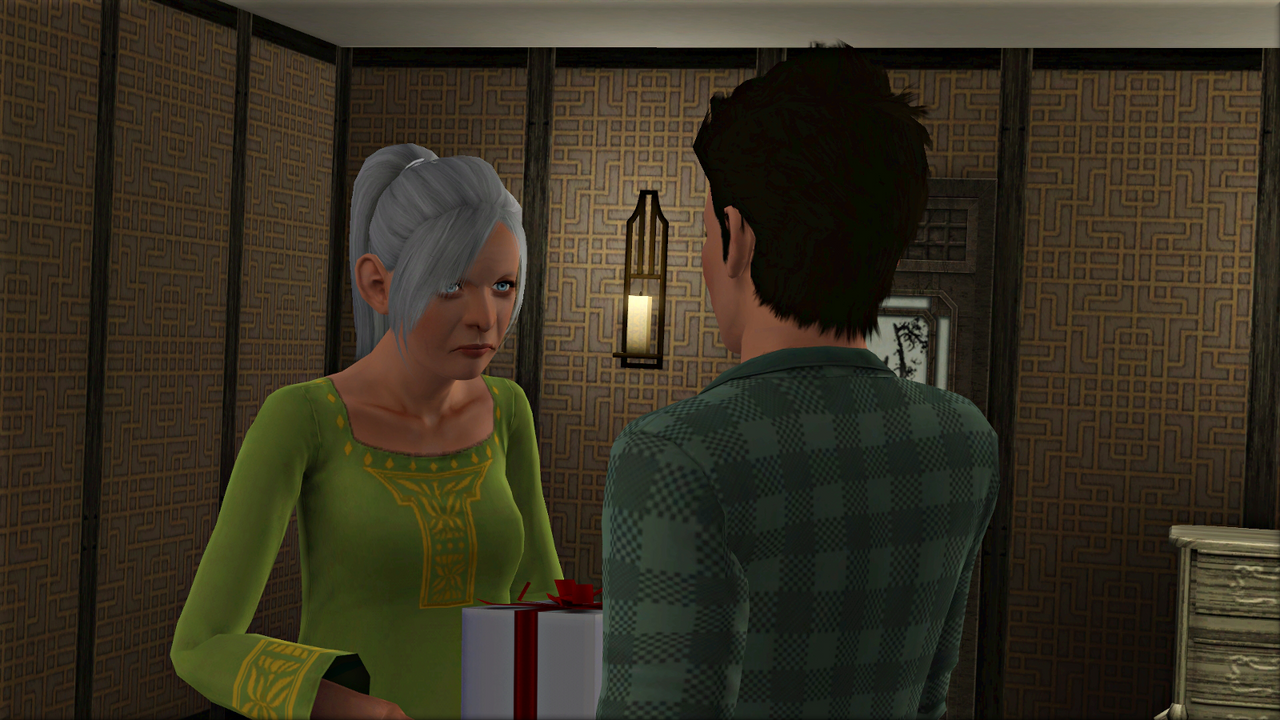 I’m sorry, Carter! I thought it would be okay! I felt bad watching his face fall. 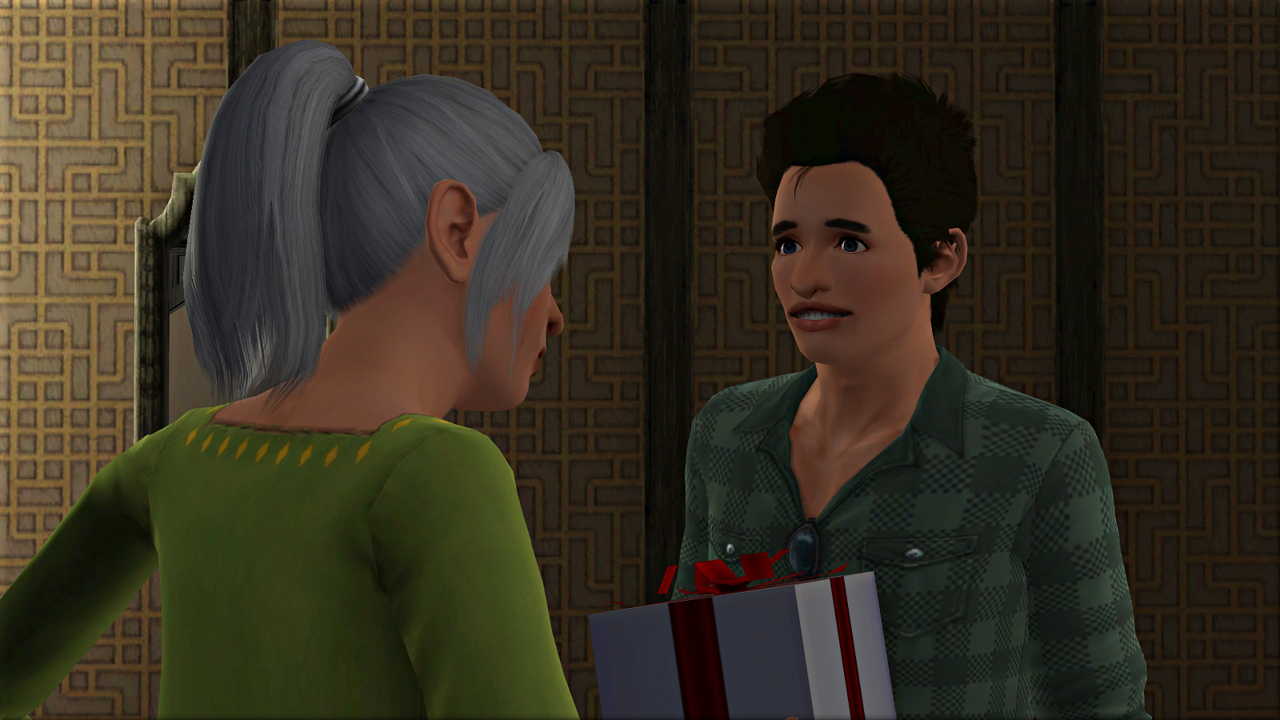 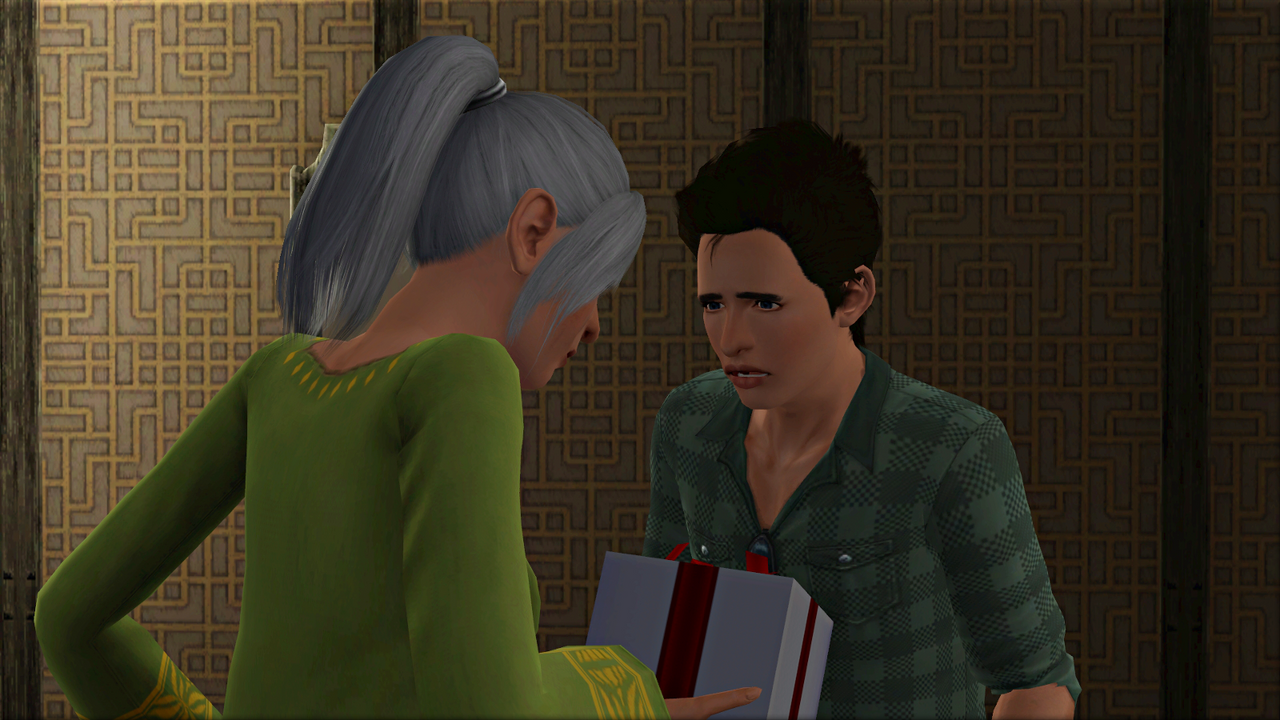 Apparently ‘we don’t know each other well for me to accept this’. What the hell, Paula? I thought we were good friends. She did also say he should have spent more on the gift though, so perhaps that’s her snob trait exerting its influence.

Anway, we had around 20,000 simoleons by this point, none of which would be to buy any more gifts for ungrateful aunts. It was time to get some proper furniture, a decision I had confirmed when Carter’s tent was struck by lighting in the middle of the night. 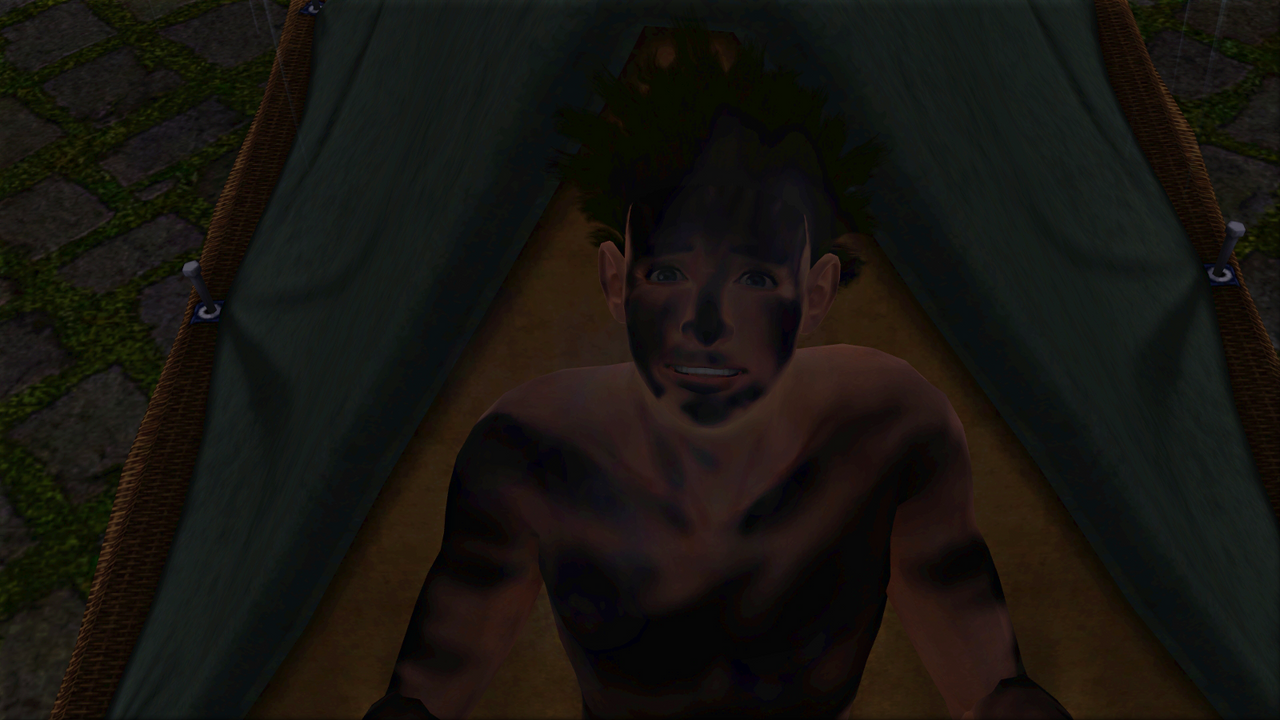