Unlike the other trait-related dreams I’d tried out so far, Jia’s ‘dream about a different personality’ from the last part seemed have permanent effects. Before she next went to sleep, I manually changed her traits back to what they were before.

That night, it was ‘personal hygiene’ for Lin and ‘generations’ for Jia. 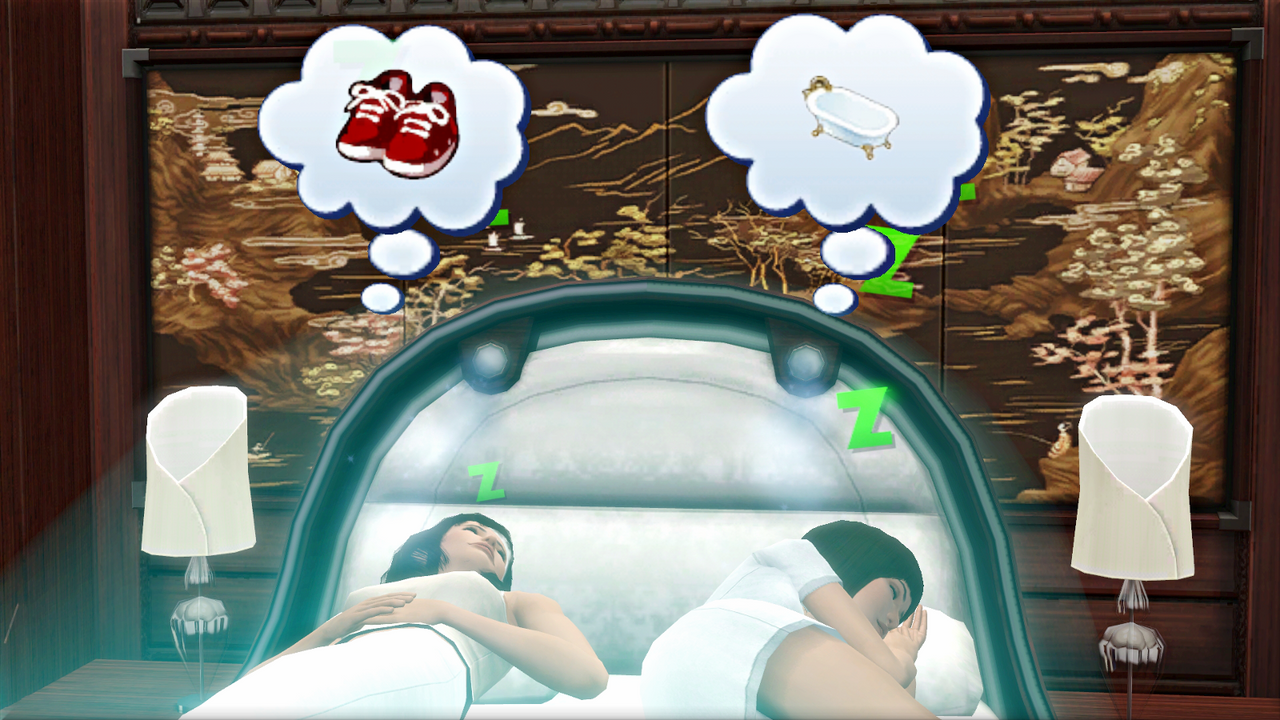 Lin’s dream turned bad in the final moments, leaving her with low hygiene and an additional -15 moodlet. She was able to raise her hygiene quickly up again with a sonic shower power cleanse, though the bad moodlet remained with her for the rest of the day. 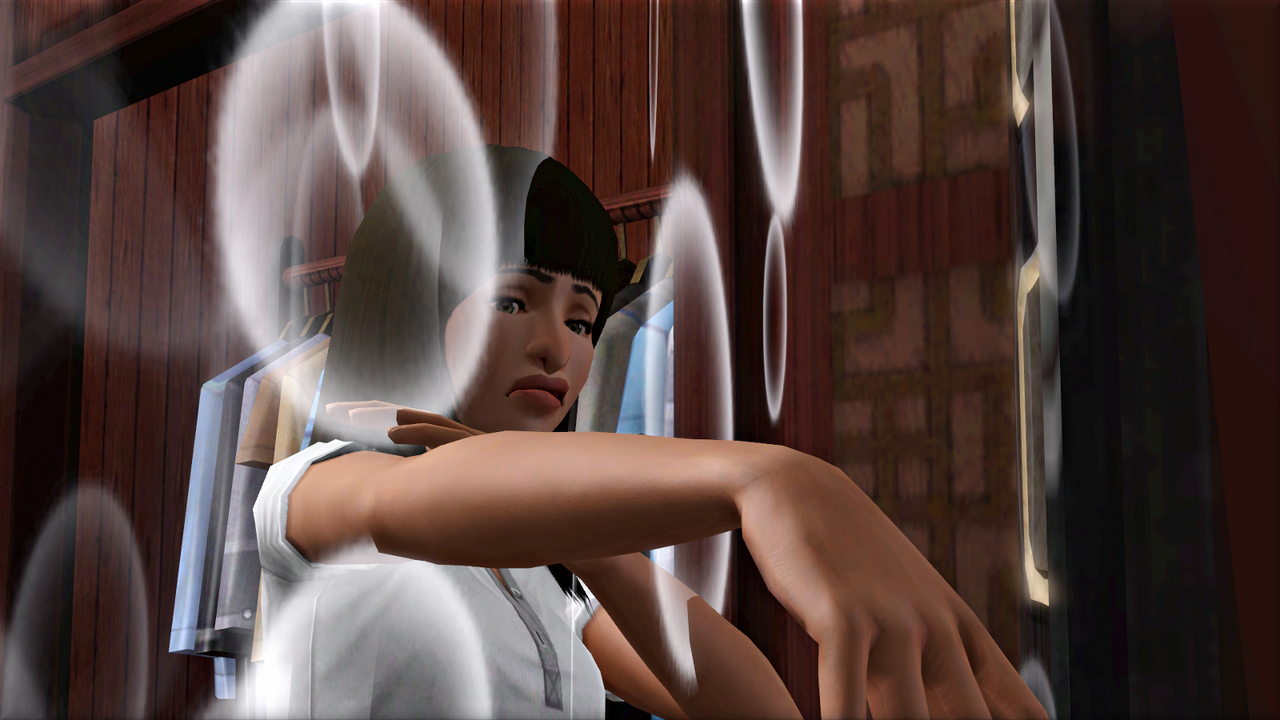 Jia’s dream went much better; her Zs were green when she woke up. As a result, her ‘gatherer’ trait was temporarily replaced with ‘nurturing’. The timing was quite appropriate. 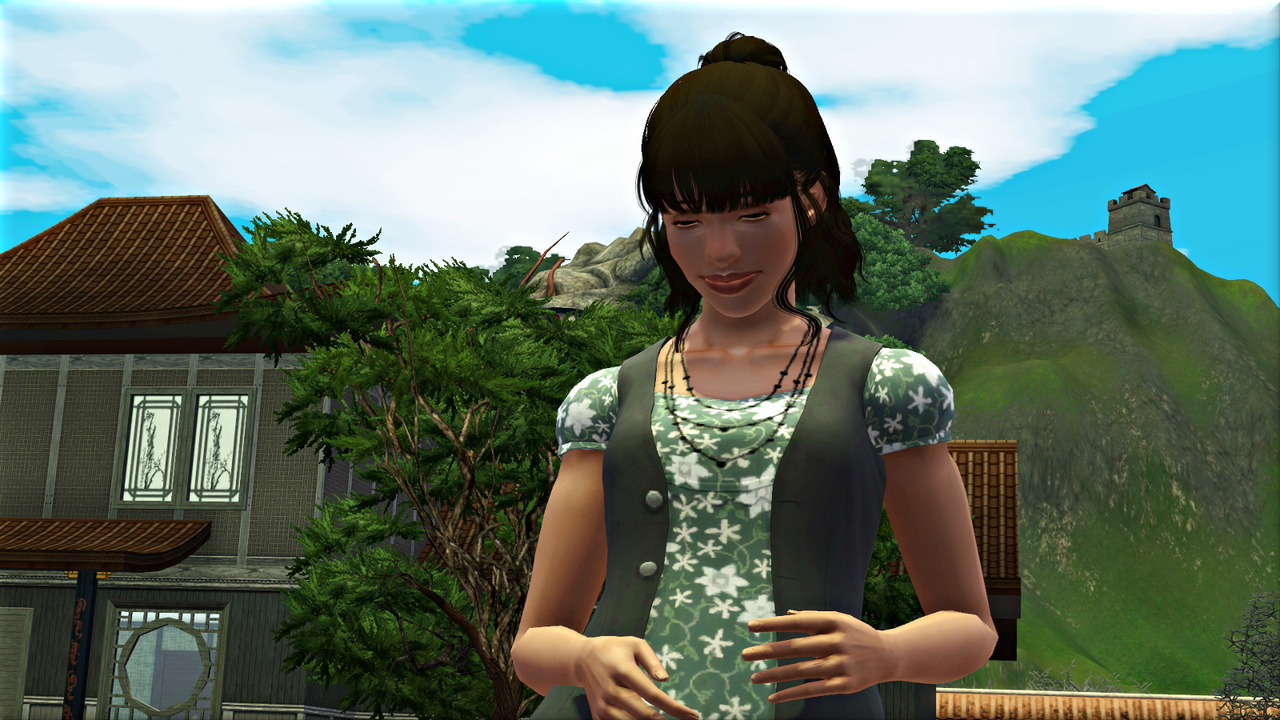 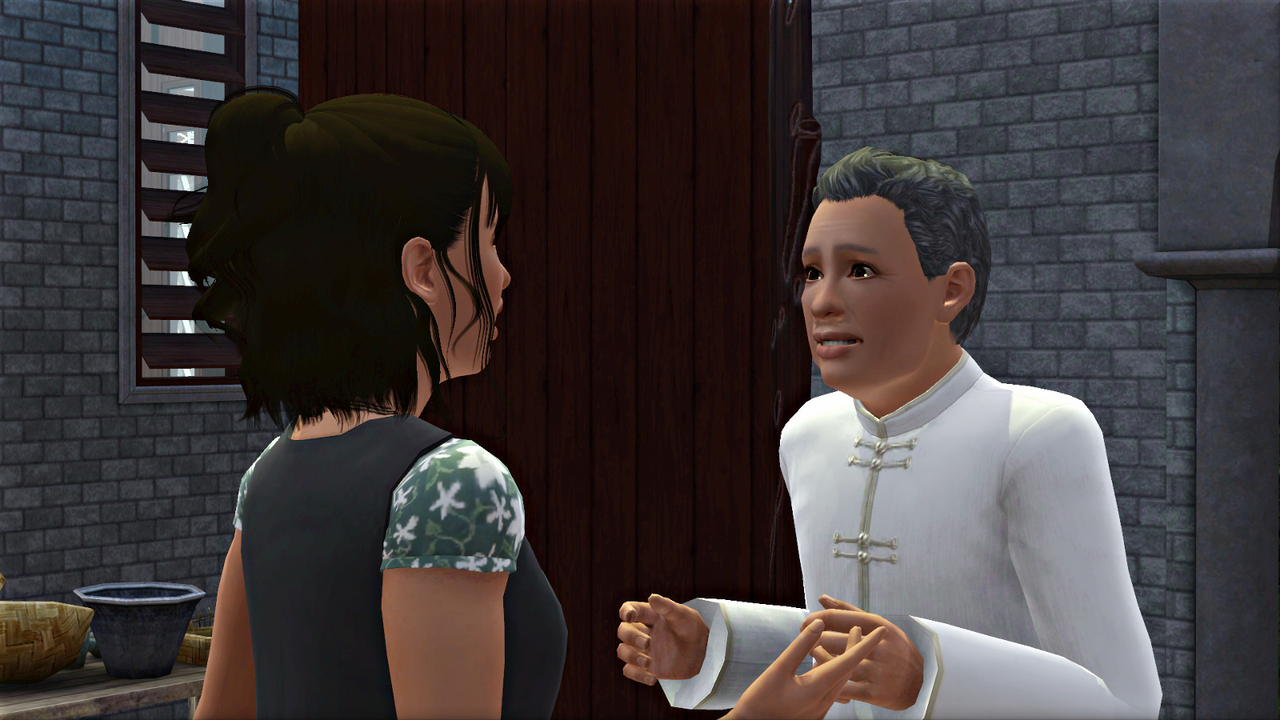 Gang was pleased too. 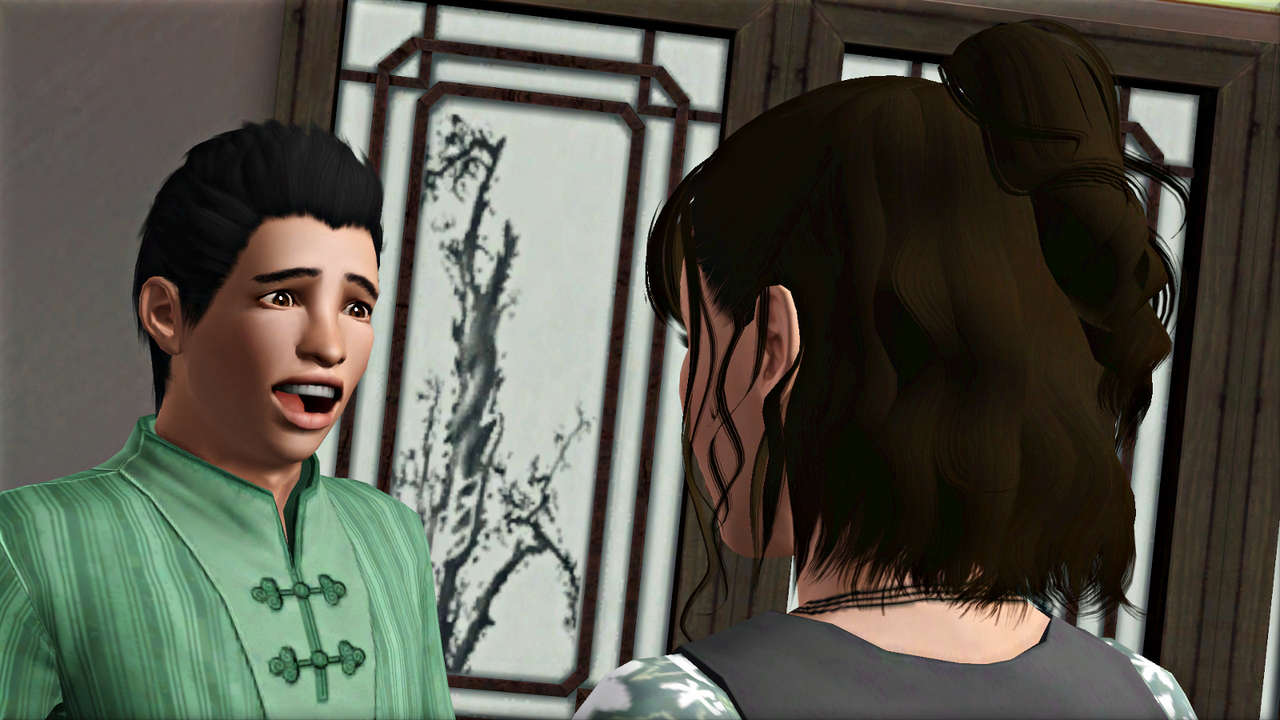 I had Jia ask him to move in. 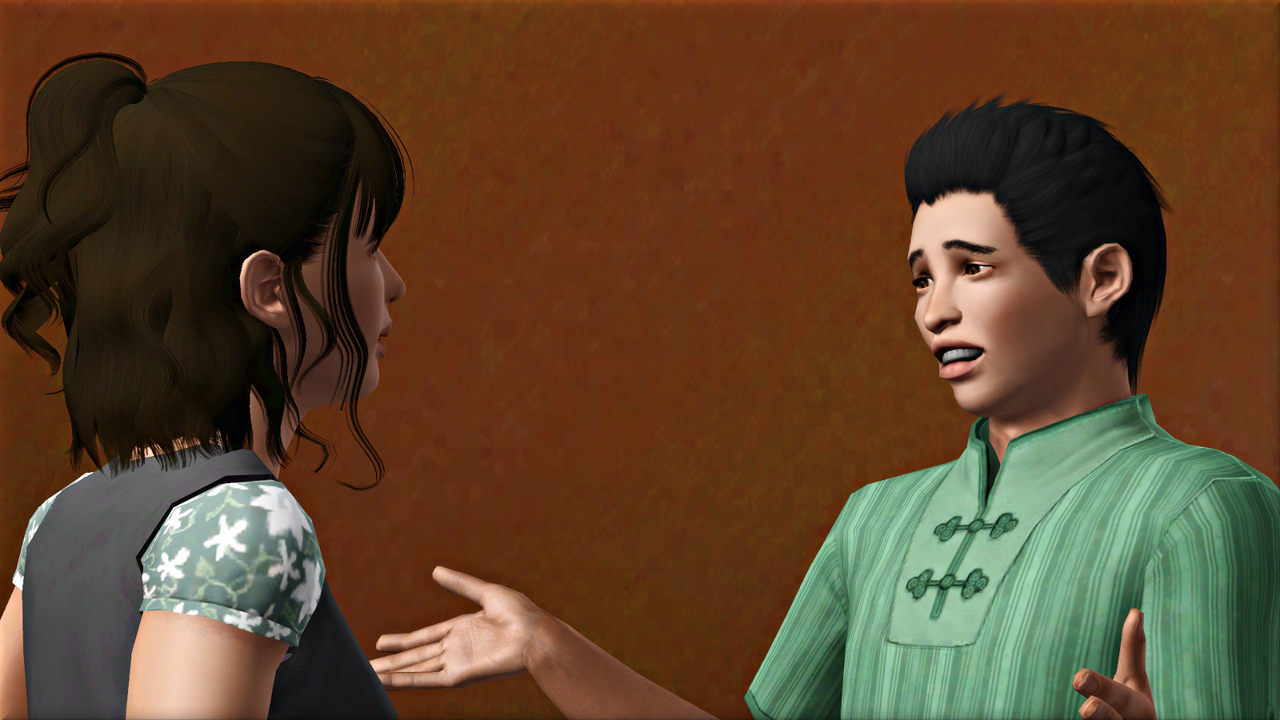 This was all happening sooner than I’d planned, but I guess this is the kind of randomness I signed up for when I set the woohoo pregnancy chance to 5%. Plus, I’m looking forward to getting on with the next generation.

Gang’s traits are brave, loves the outdoors, excitable, kleptomaniac, and childish. He’s not a vegetarian, but his favourite meal is a tofu one. He works in the ghost hunter profession. 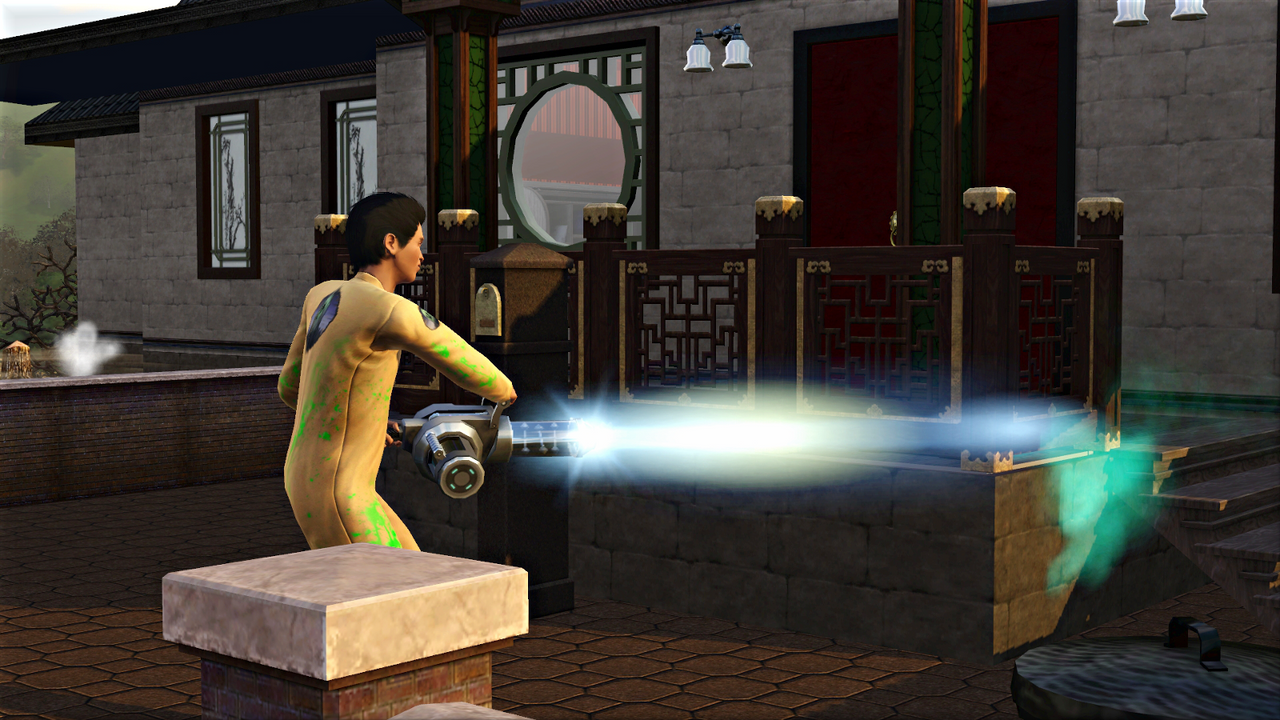 I’m going to keep him in this line of work for now, and see how far along I can get him without raising logic or handiness.

Visiting sims’ houses for jobs will provide him with a good cover story with what he’s really up to: working towards his lifetime wish of possessing stolen goods worth 50,000 simoleons. 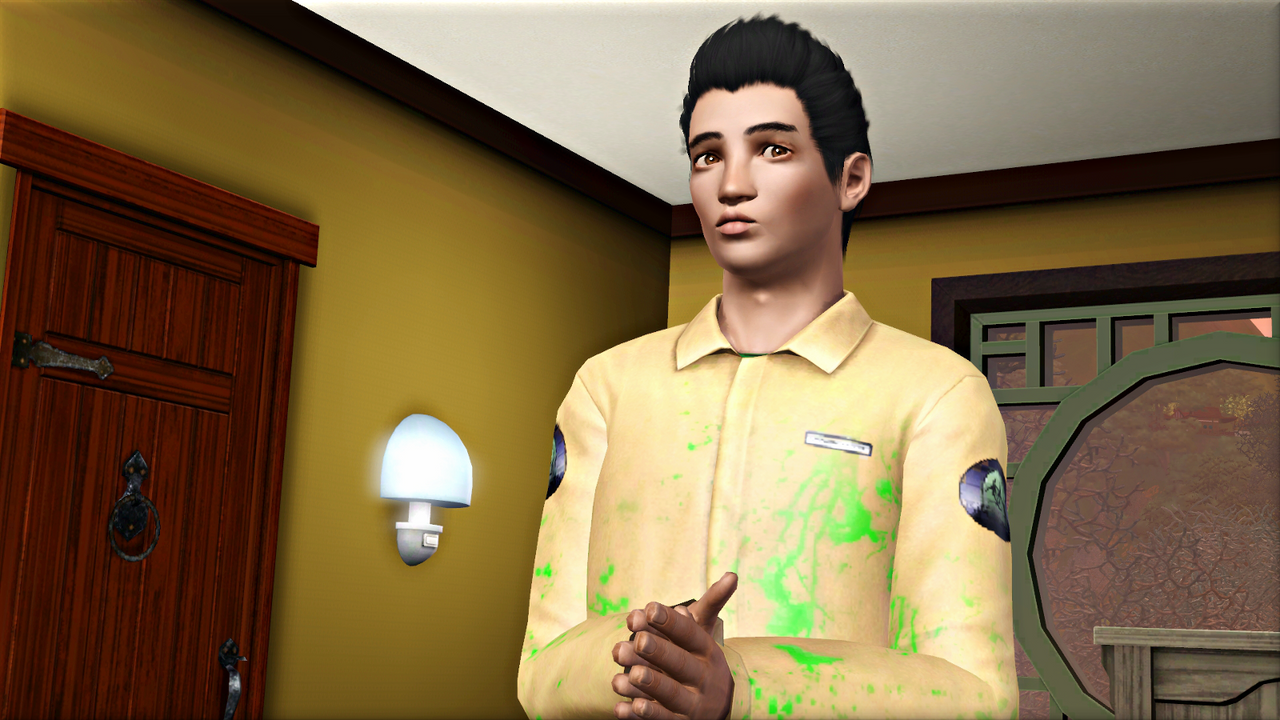 While Gang was off banishing spirits and stealing lampshades, Lin had a birthday party. 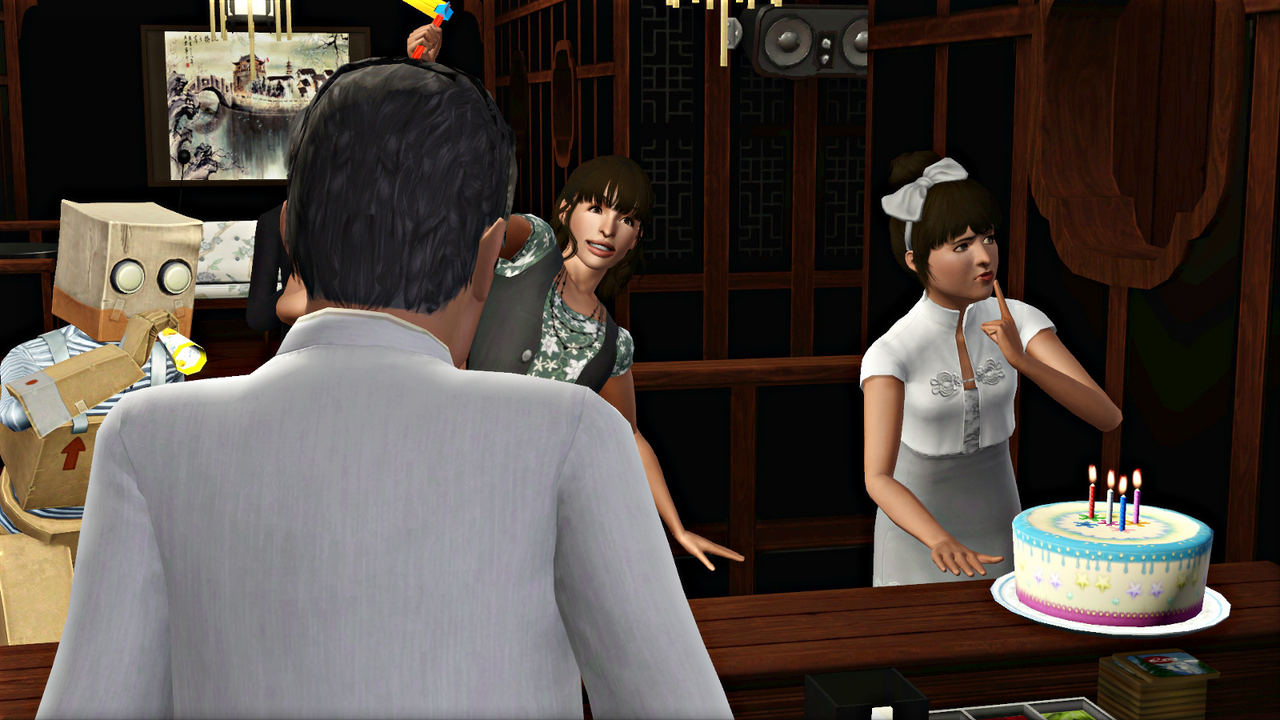 Unfortunately she still had the same aging bug I described in Part 26. I had really hoped that might have fixed itself by now.

Just like last time, I had to age her up in CAS again and then reset her. 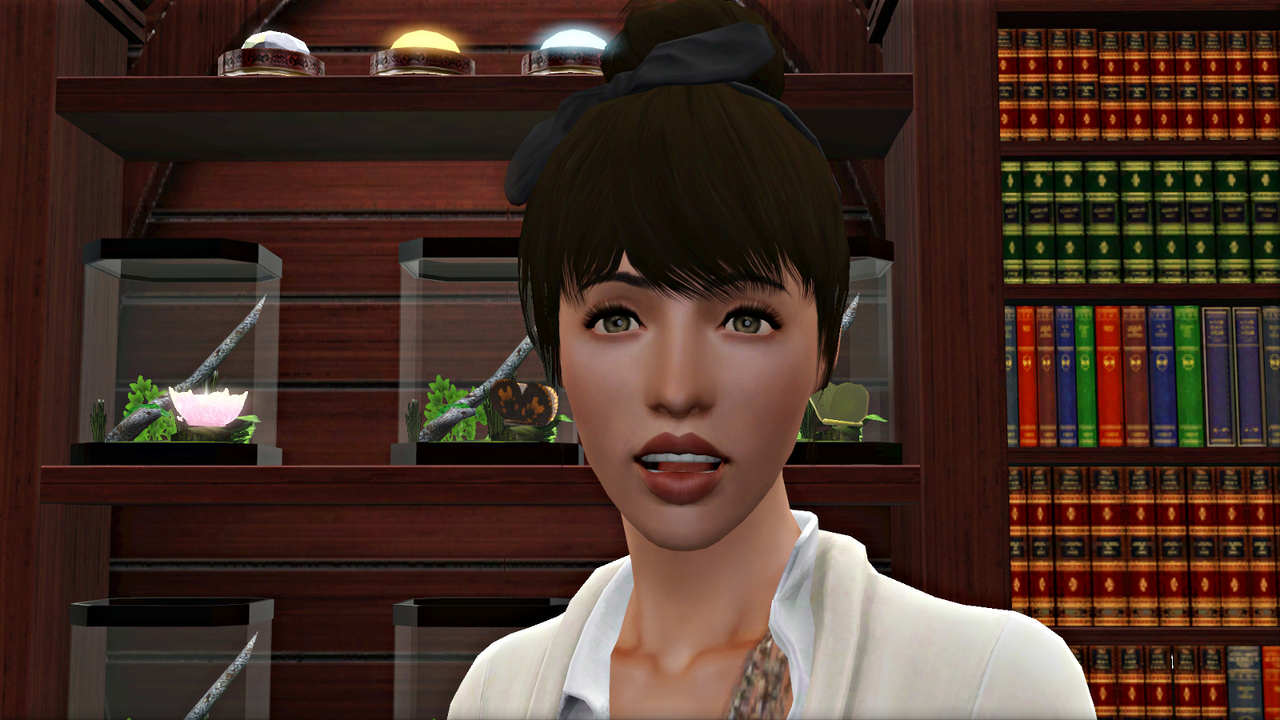 I moved Lin into the old family home at 10 South Ancestor Hills. Fingers crossed my Nraas mods will know how to take care of her. 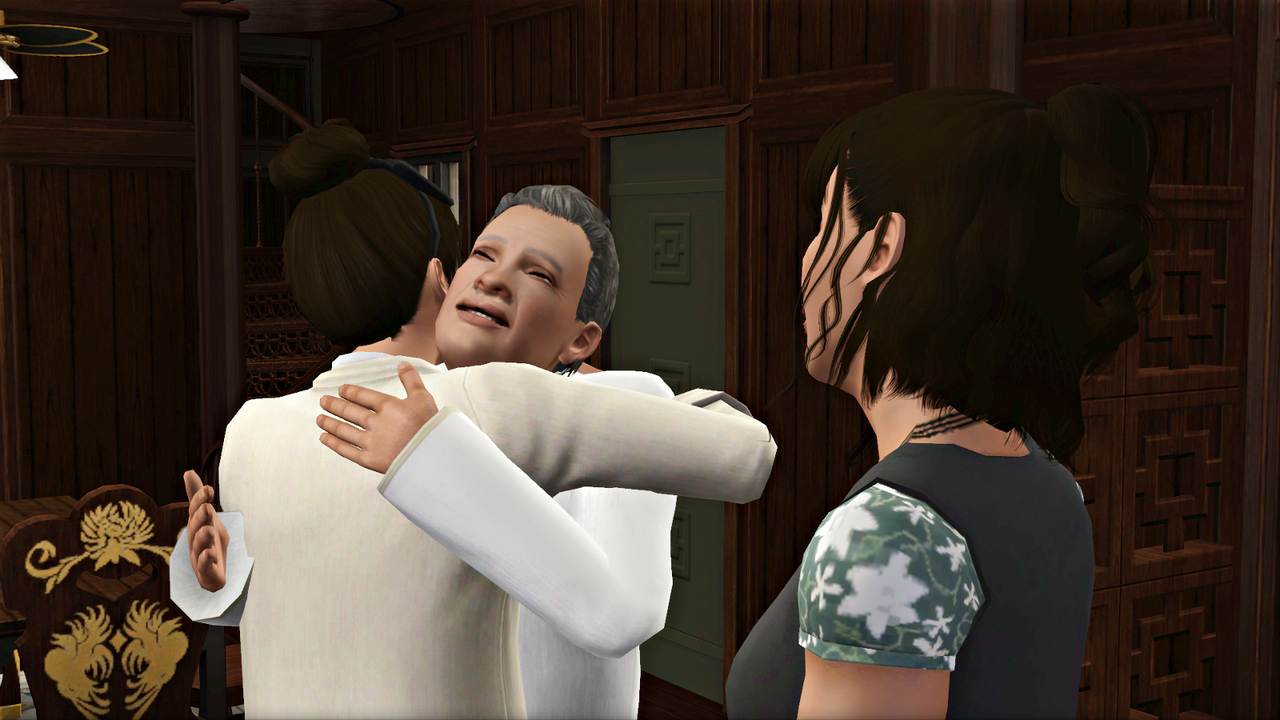 Jia and Gang spent their first night together. This is how the dream pod looks when sims woohoo in it. 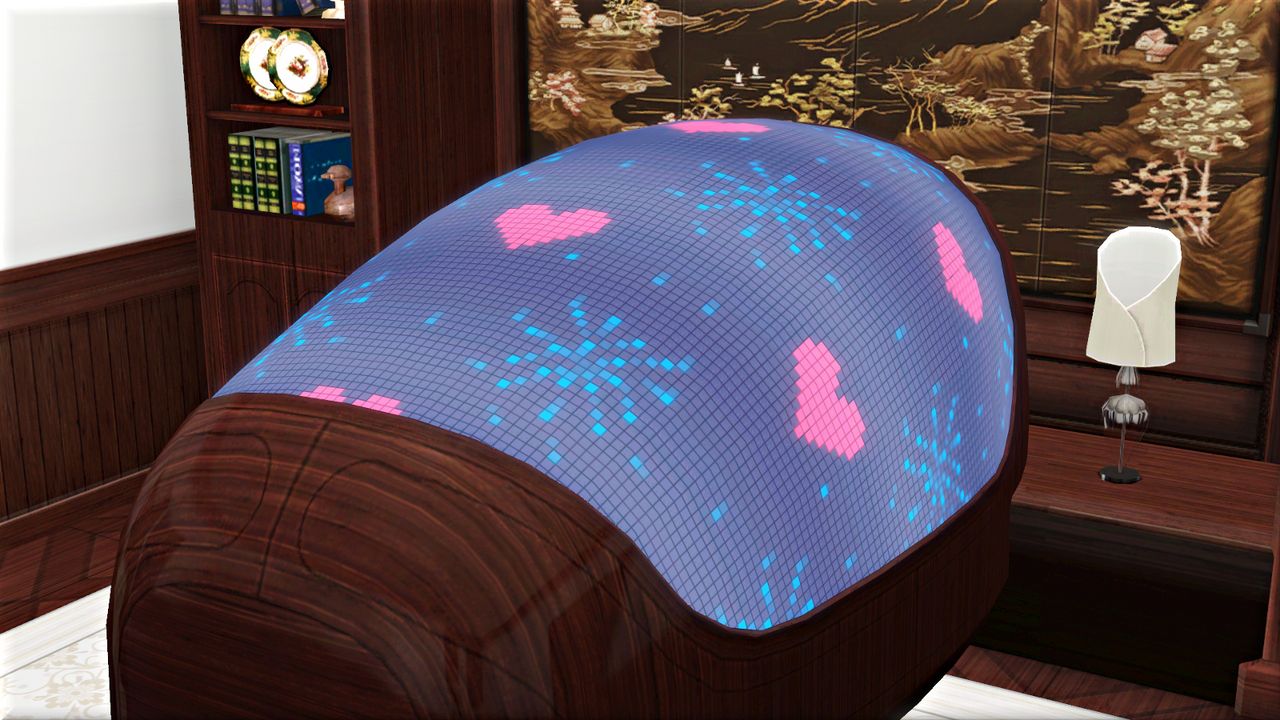 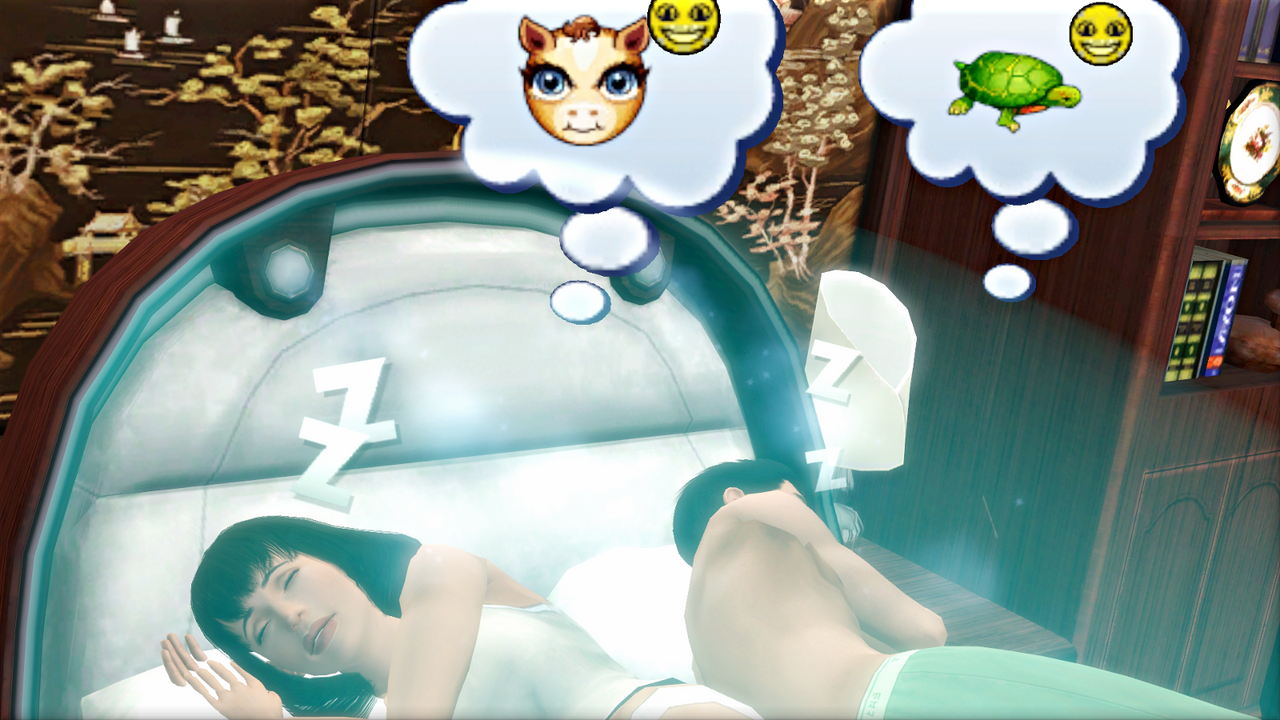 It might take him a while to get used to some of the gadgets we have about the house. The sonic shower was the first to give him trouble. 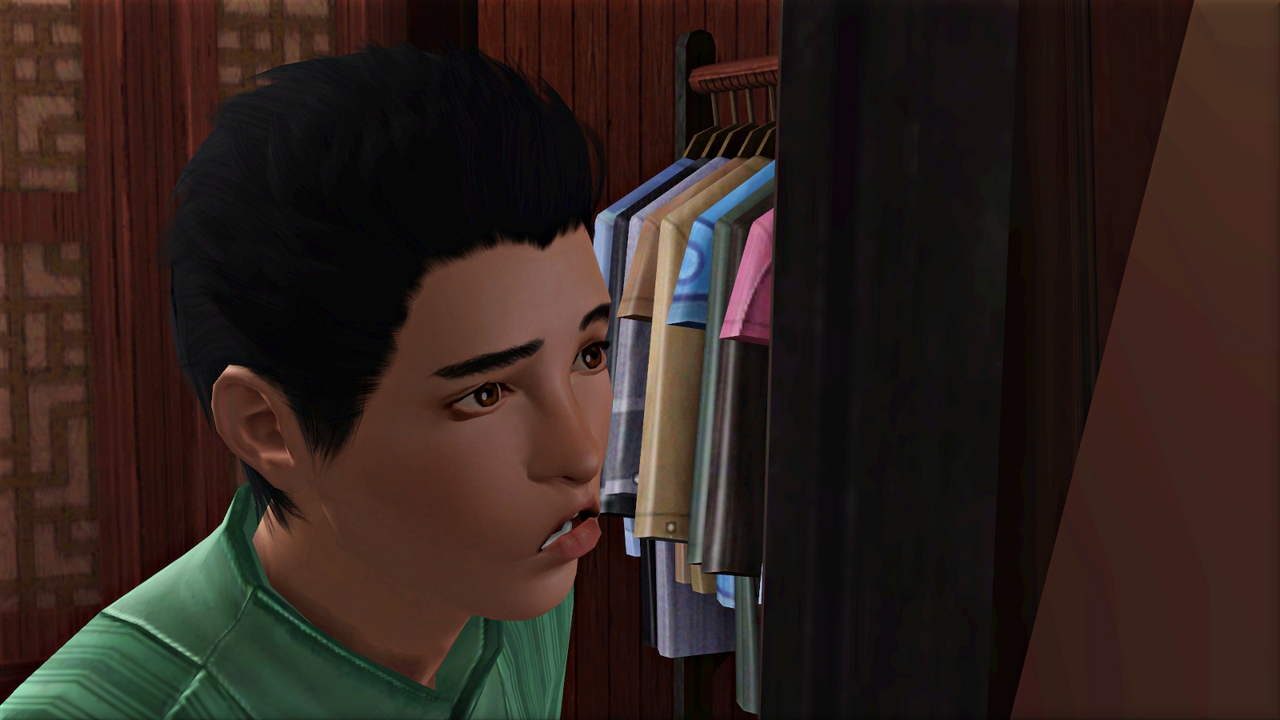 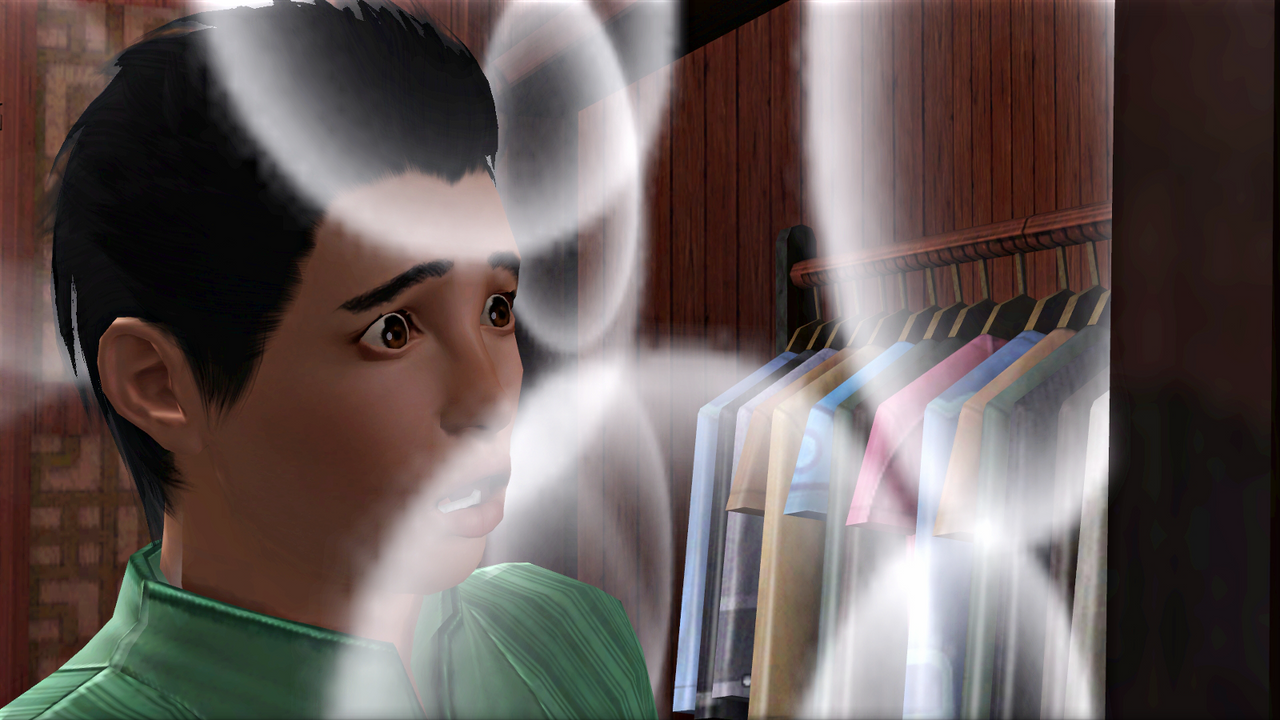 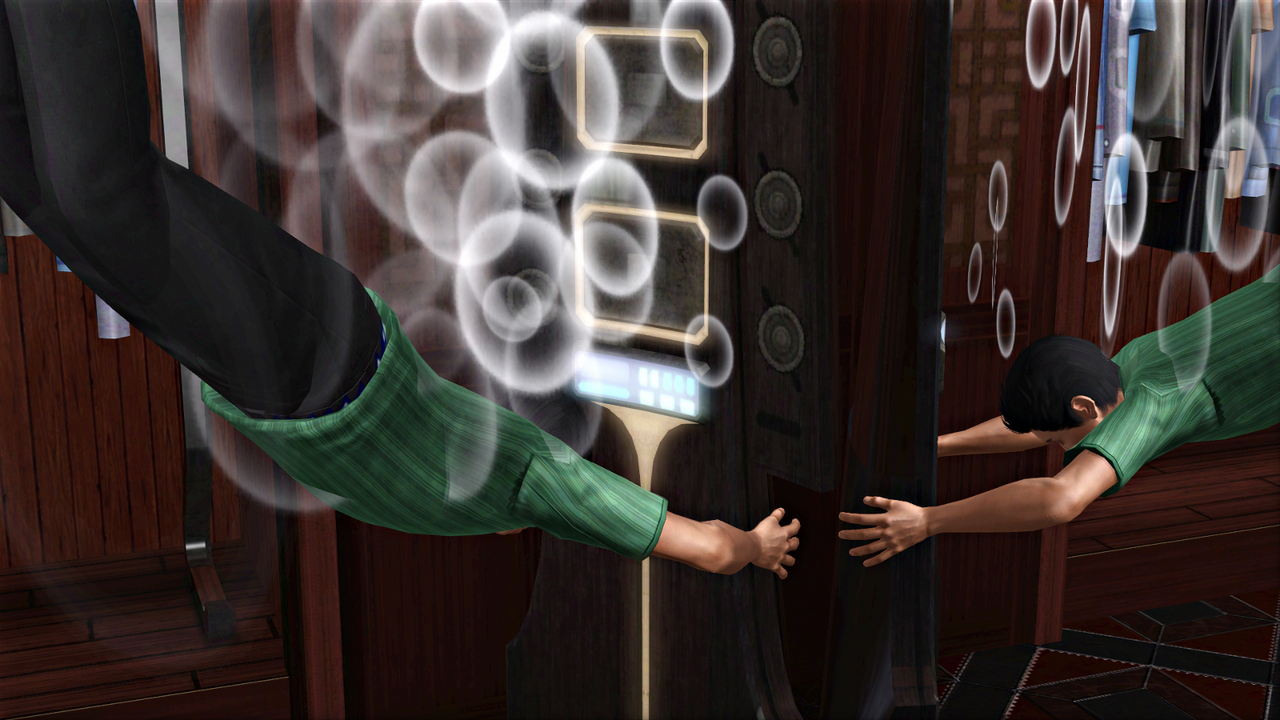 With the food synthesizer, he had mixed success. When he could get it to work, it provided him with perfect quality plates of everything he ordered, including his favourite, vegetarian dim sum. 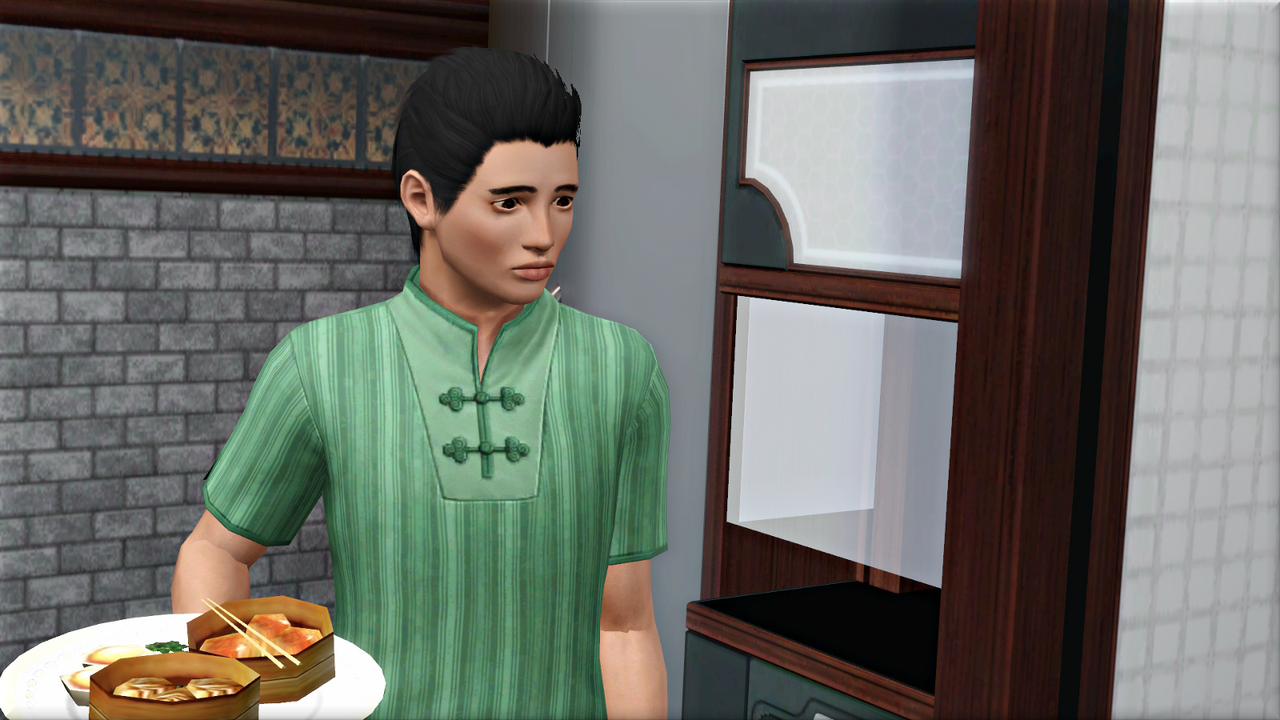 But sometimes he got foul quality food, and a squirt of nasty liquid in his face. 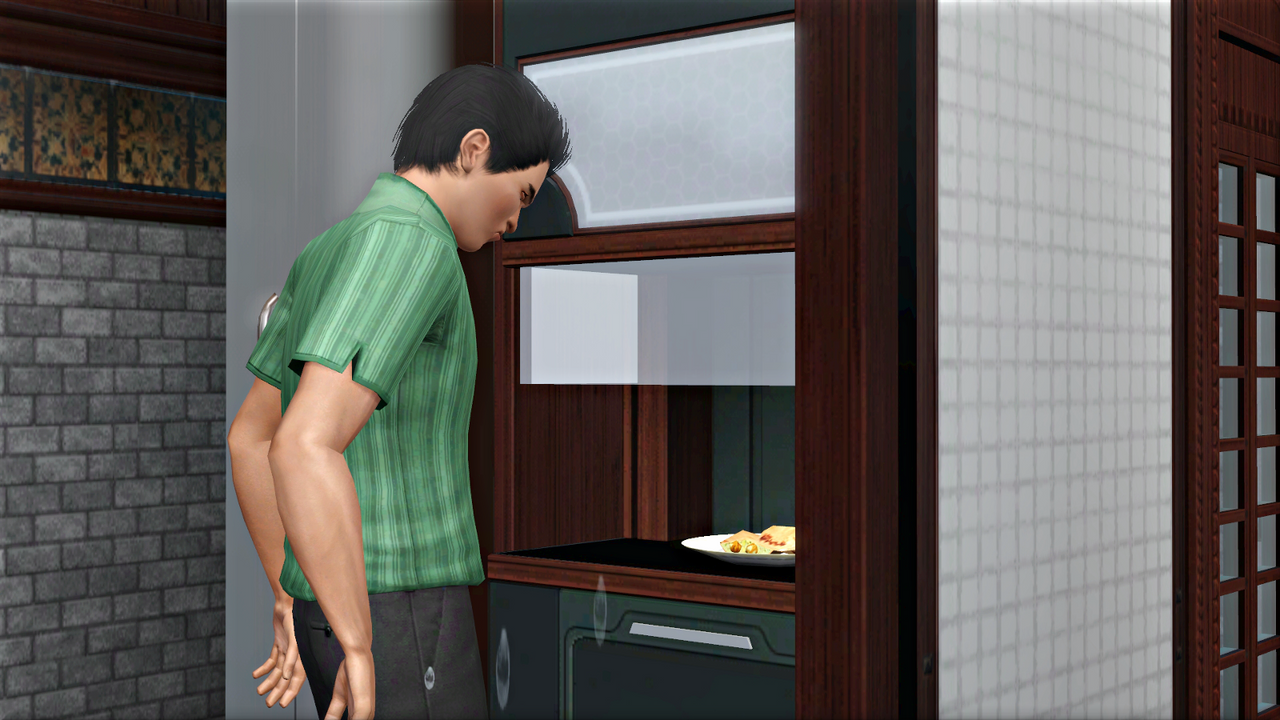 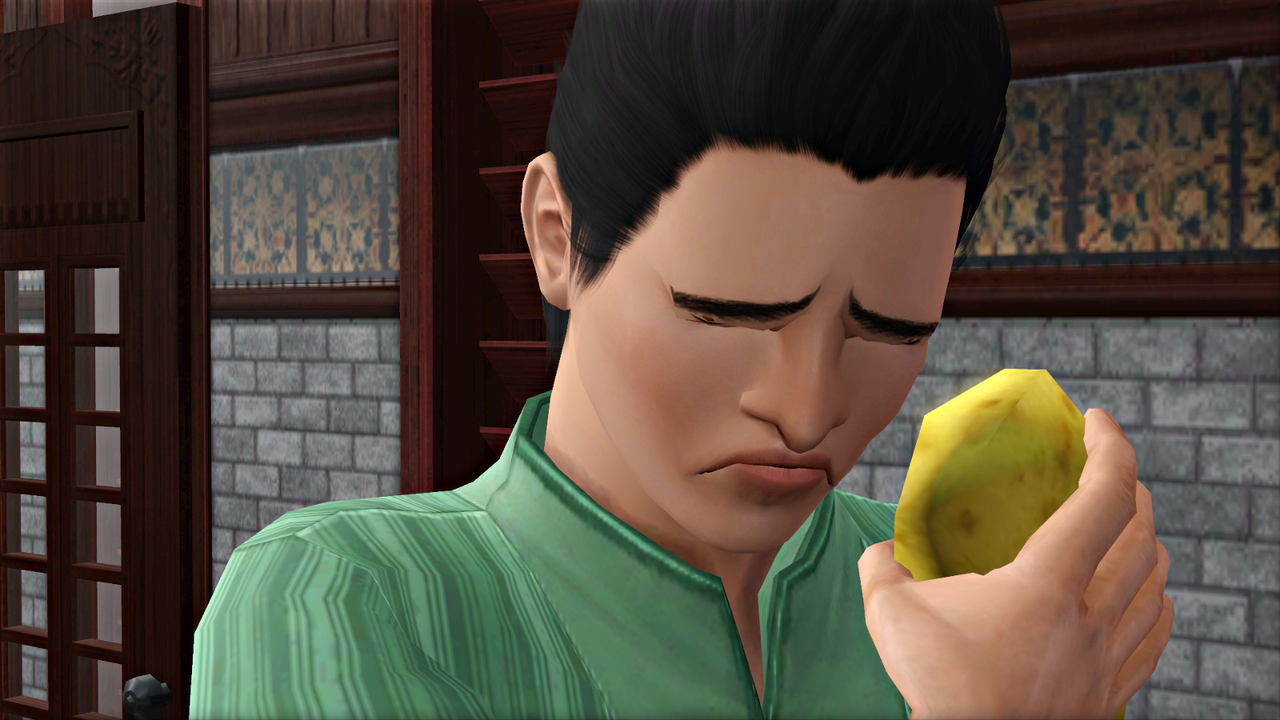 Gang and Jia went out to buy a couple of pregnancy books to read. 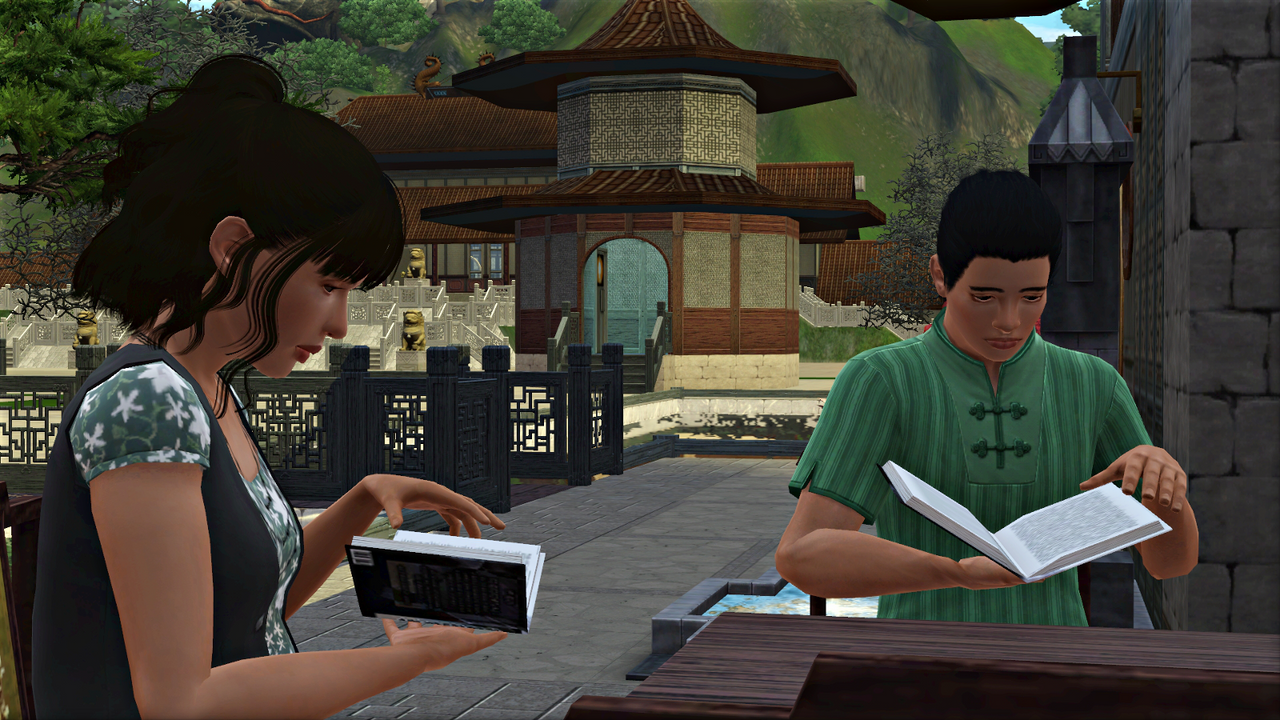 In the evening they had their sisters Lin and Huang round for dinner, along with Huang’s boyfriend Andrew. Almost everyone was able to have their favourite. 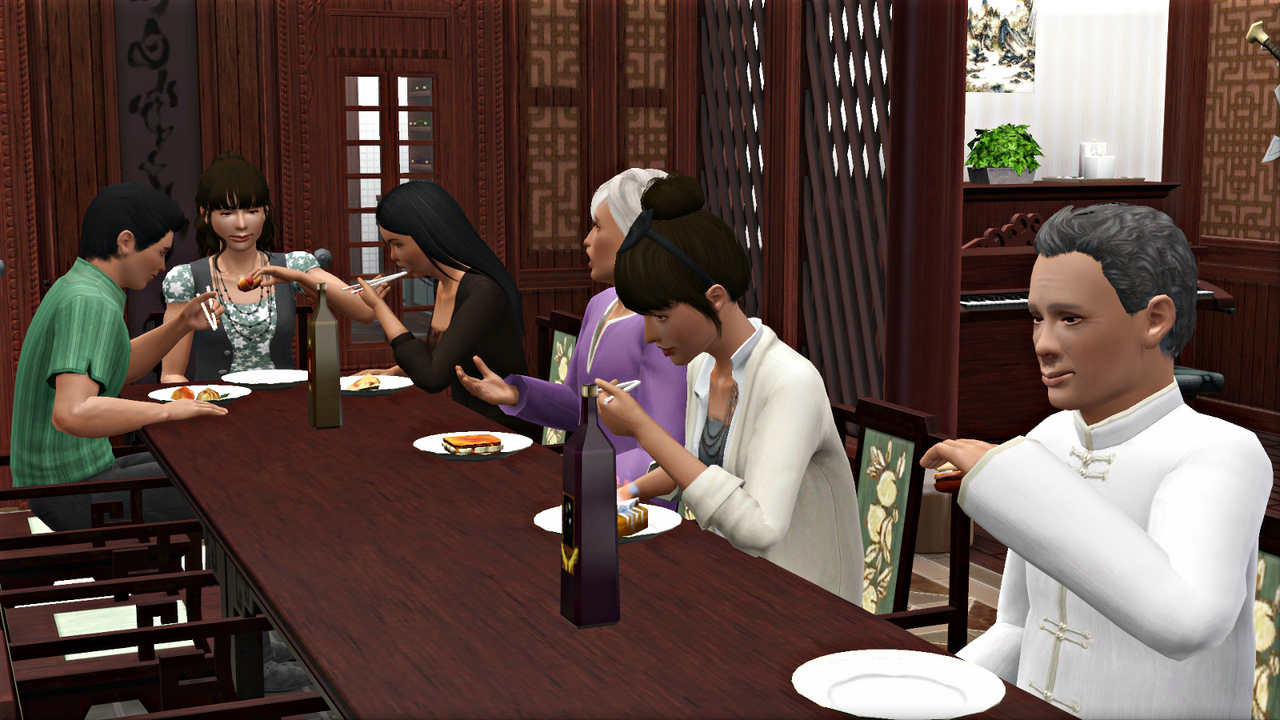 Gang had to leave for work as soon as he was done eating. 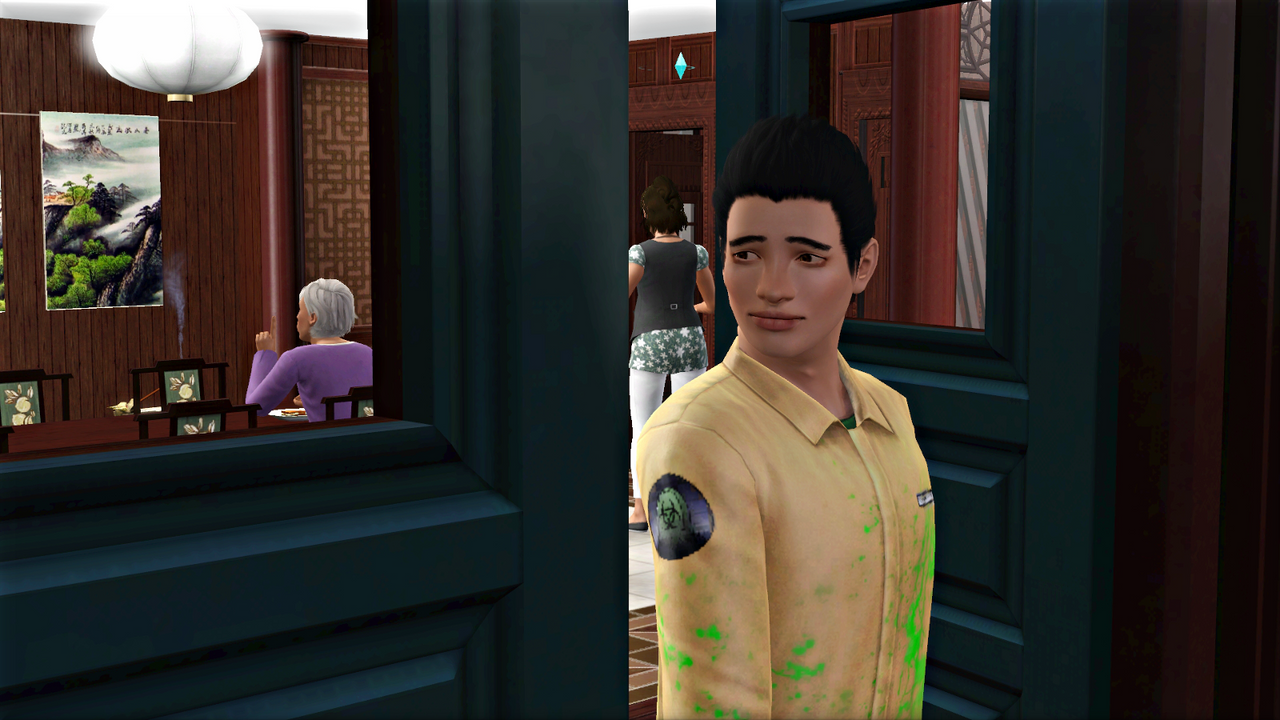 Jia did her best to mend her relationship with Andrew. They used to be such good friends, and it doesn’t look like Huang will be leaving him any time soon. 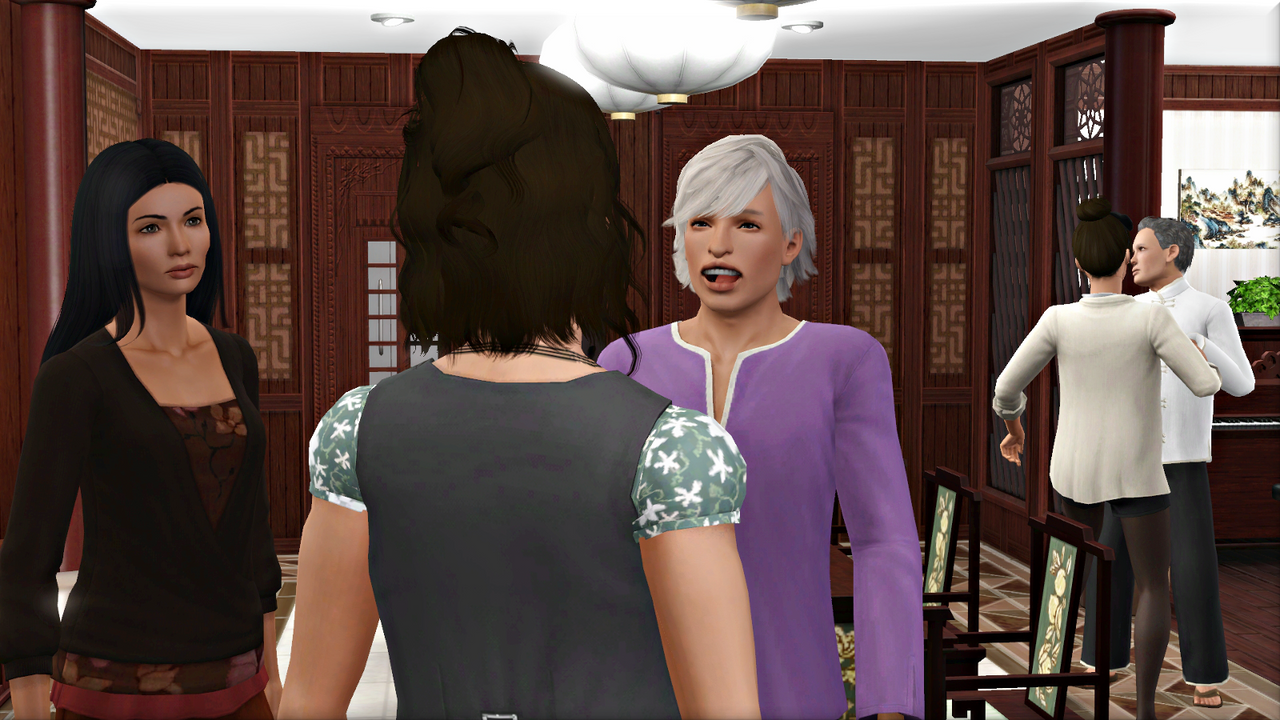 But Jia had not forgotten about the time Andrew cheated on his girlfriend. With Huang, she had options to ‘express condolences for betrayal’ and ‘calm down’. I don’t think this was some new betrayal, because I checked Huang’s moodlets with Master Controller and there was nothing bad. I like to think that Jia is just constantly saying, ‘hey, remember that time your boyfriend cheated on you?’ 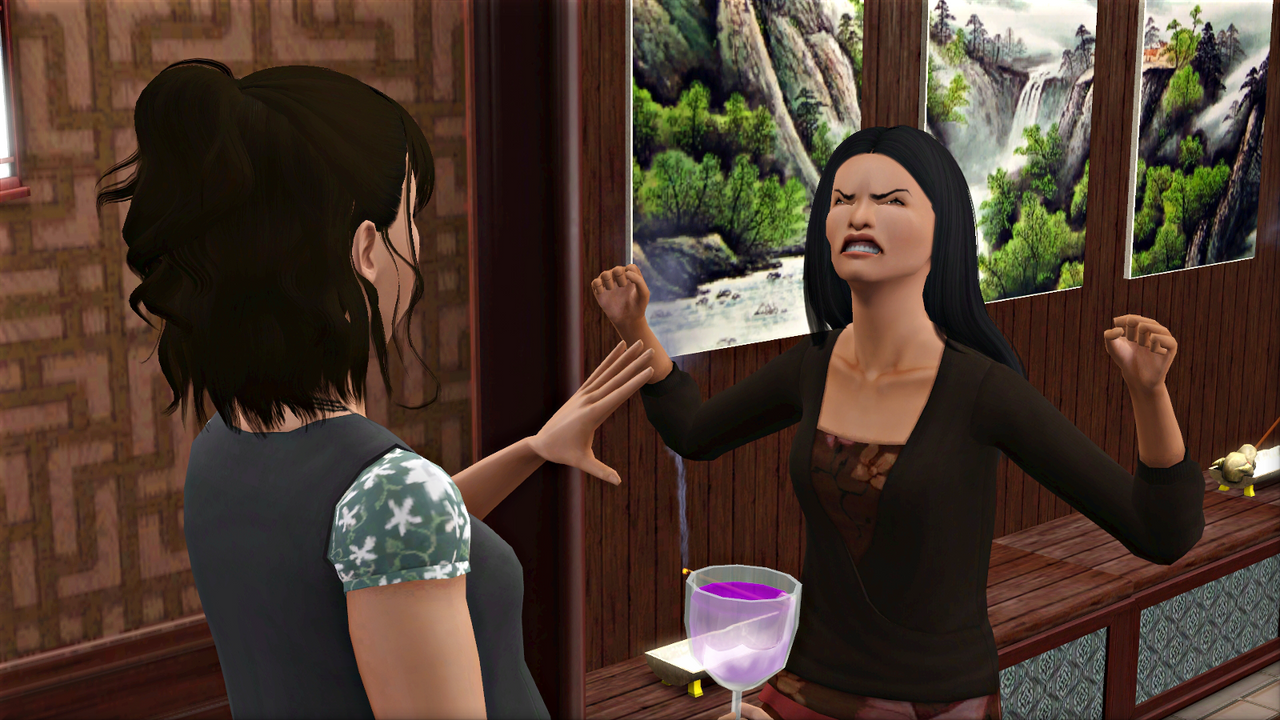 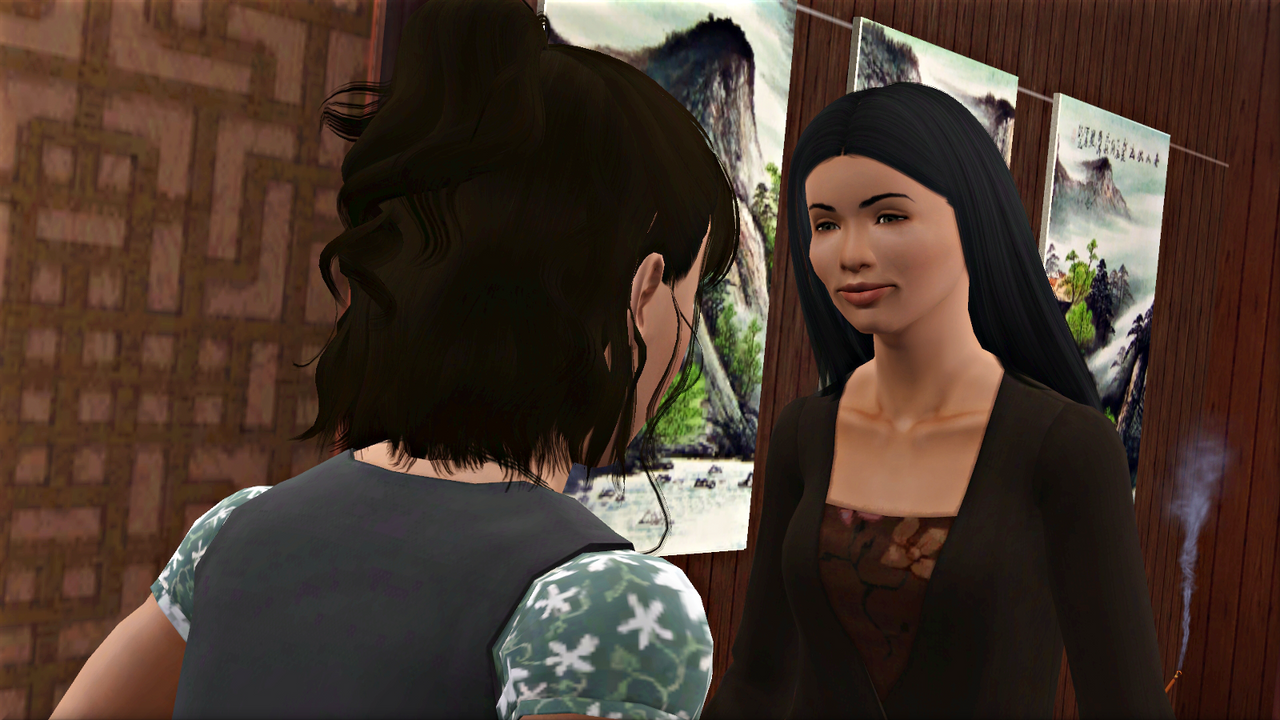 Poor Huang. Maybe she should find a more sensitive best friend. And a boyfriend who doesn’t cheat on her. And, while she’s at it, a brother who doesn’t love to scare her quite so much.

Lin diffused the rising tension by pulling a piano out of her inventory. 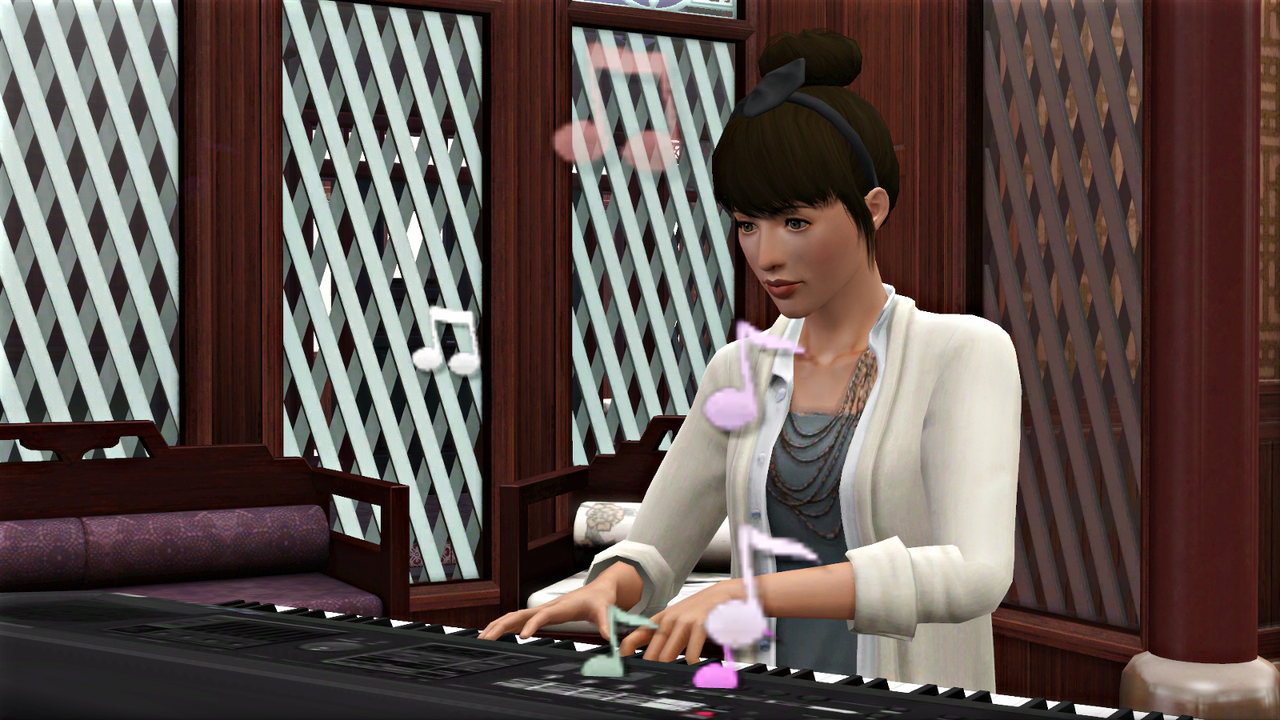 I’m glad she’s found this new hobby. I felt guilty about how little of her own she had to do while she was living with us. She’s writing her first novel too, apparently.

The dinner party was a success, overall. Afterwards, everyone enjoyed a good night’s sleep.

The following afternoon, Jia gave birth to a little girl, Mei Yuan-Kim. With her, we’ll be exploring the fishing, science, and DJing skills. 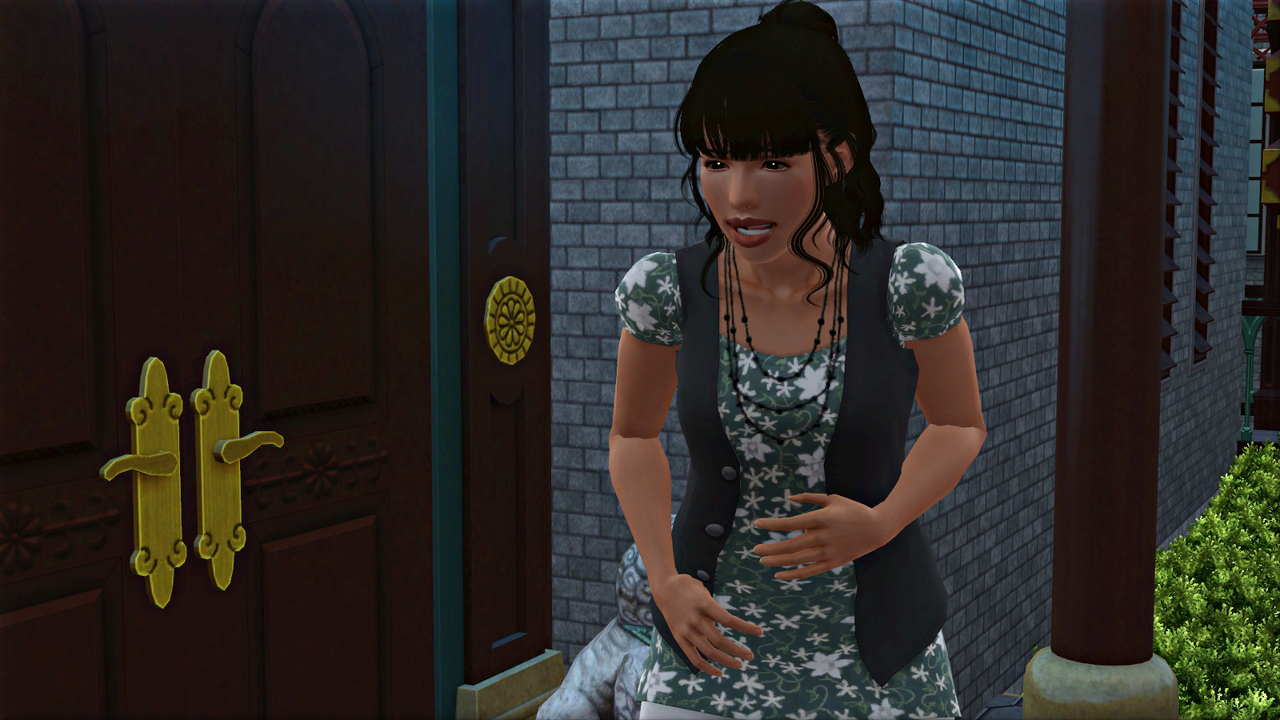 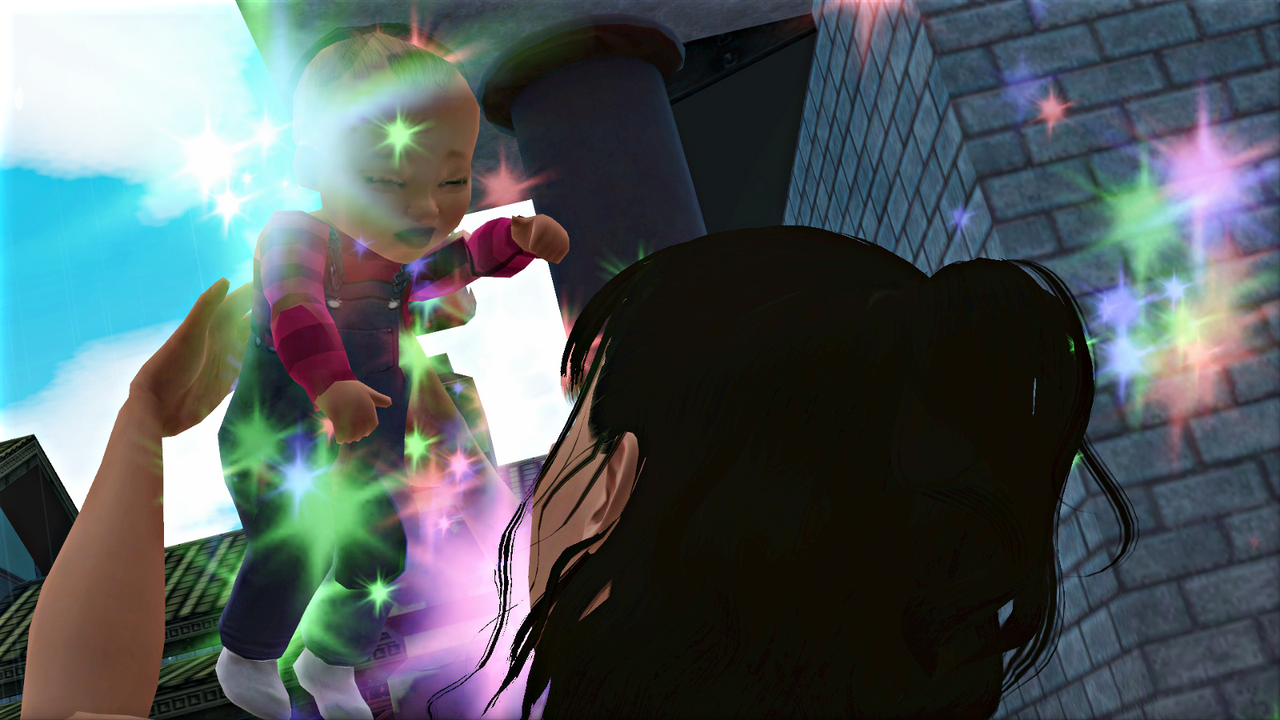 Mei’s insane and loves the outdoors. I think she’s going to get along just fine with her oddball parents.